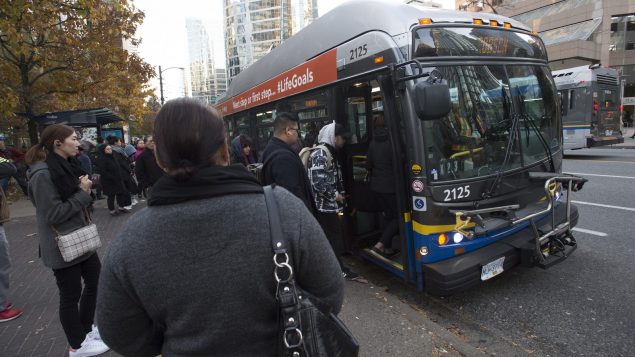 Passengers board a bus in downtown Vancouver, Friday, November, 1, 2019. A pilot project to increase access to transit for low-income residents in the city of Vancouver was approved by the city council . (The Canadian Press/Jonathan Hayward)

A pilot project to increase access to transit for low-income residents in the city of Vancouver was approved by the city council on Tuesday.

The approved pilot project is a reduced fare transit program that is looking to design, test, evaluate, and make recommendations for free or subsidized transit passes in Vancouver for 50 to a 100 people that are experiencing poverty.

A statement from the city said that priority will be given to Indigenous residents and people of colour, including women, children, youth, families and people living in temporary housing.

“During our engagement sessions for the City’s poverty reduction plan, a lack of access to affordable transportation emerged as a major barrier that kept people in cycles of poverty,” Sandra Singh, the general manager of arts, culture, and community service of Vancouver, said in a statement. “We believe that this transit pilot will act as a catalyst to help improve the quality of life for low-income residents.”

The Reduced Fare Transit Pilot will be funded through $50,000 by the Union of British Columbia Municipalities, and is expected to be implemented in 2021.

According to the press release, the pilot project from the city is based on the B.C. Poverty Reduction Coalition’s 2019 All On Board campaign that advocated for accessible and affordable transit for all transit systems in British Columbia.

“We’re extremely excited because we know that the pilot has an opportunity to really reveal the impacts of mobility poverty on low-income communities and paint a portrait of some of the policy solutions we know will make a difference,” Viveca Ellis, interim community organizer with the B.C. Poverty Reduction Coalition, told CBC News.

Ellis told Radio Canada International that she’s happy that funding was able to be secured for the pilot project and added that B.C. Poverty Reduction Coalition has been advocating for additional funding for a larger project.

Looking forward, Ellis said that the B.C. Poverty Reduction Coalition’s immediate vision is to lay the groundwork for transit to be a universal basic service that is accessible to all, starting with making transit free for youth aged zero to 18, and advocating for a sliding scale pass for adults based on their income.

They are also looking to stop ticketing minors for fare evasion and to introduce community service as options for adults as an alternative to fare evasion tickets.

With files from CBC News and Rafferty Baker