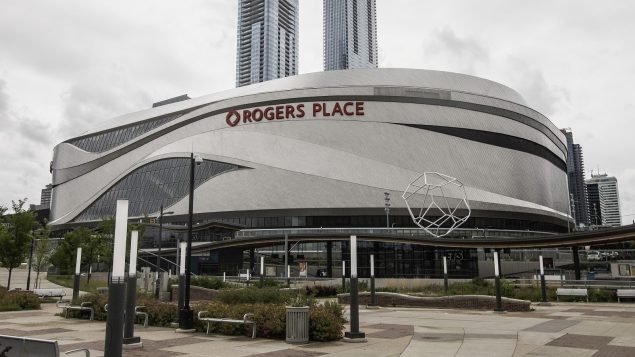 Home of the NHL's Edmonton Oilers Rogers Place arena is shown in Edmonton, Alta., on Thursday July 2, 2020. The 2021 World Junior Hockey Championship will be played using a bubble format at Rogers Place in Edmonton. (The Canadian Press/Jason Franson)

The 2021 World Junior Hockey Championship will be played using a bubble format at Rogers Place in Edmonton.

According to an announcement on Thursday from the International Ice Hockey Federation (IIHF), the IIHF Council approved a proposal from Hockey Canada to host the tournament in Edmonton.

They also said that the 2021 tournament will happen without spectators in order to maintain the safety of players and officials and to be in compliance with Canadian government guidelines related to COVID-19.

The 2021 #WorldJuniors will be played in a bubble without spectators in Edmonton🇨🇦, in 2022 with fans in Edmonton & Red Deer. The World Juniors in Gothenburg🇸🇪 will be moved to 2024. https://t.co/LIK2g8RYiG

“This is a tough decision to have to take, but ultimately we did not have a choice. The health and safety of players, officials, and fans is our top priority.” René Fasel, President, International Ice Hockey Federation (IIHF)

In his statement, Fasel added that the IIHF was impressed with the presentation from the local organizing committee about how a potential bubble scenario would operate within Edmonton and that they are confident they follow the National Hockey League’s (NHL) example in creating a safe environment for the teams to compete in.

The NHL had created two bubble cities, one in Edmonton and one in Toronto, in order to successfully complete the season and playoffs amid the COVID-19 pandemic. The league restarted their season on Aug. 1 in the two bubbles and since the restart, have had no players test positive for COVID-19, according to a tweet from the NHL.

In response to today’s @IIHFHockey announcement, we’re not only grateful to host this year’s #WorldJuniors (@HC_WJC) in Edmonton – albeit without fans – but we’re also excited to bring the Championship back to home ice next year! 🇨🇦

“A tremendous amount of work has been put into the planning of the 2021 IIHF World Junior Championship, and we appreciate the IIHF’s consideration of our hosting proposal for the event,” Tom Renney, the Chief Executive Officer of Hockey Canada, said in a statement.

“Hockey Canada believes it will be able to host a safe and successful event for all participants and the community at large this year by following strict safety protocols set forth by the appropriate health authorities.”

The IIHF said that the moving to a single venue in Edmonton will require a review of the tournament schedule, which will be announced at a later date.

The IIHF also announced that Canada and Sweden are switching hosting duties for the 2022 and 2024 World Juniors. Originally, the 2022 World Junior Championship was scheduled to be hosted in Gothenburg, Sweden.

But in order to mitigate costs associated with hosting a competition in a bubble, the IIHF Council together with Hockey Canada and the Swedish Ice Hockey Association agreed that the 2022 World Juniors are now going to be hosted in Edmonton and Red Deer, and Sweden will host the 2024 World Junior Championship.

“It was not a favourable position for us to be placed in as we have started preparations together with the city of Gothenburg to host next year. But we had constructive discussions with Hockey Canada and the IIHF.”Anders Larsson, President, Swedish Ice Hockey Association

“We are confident that together with the IIHF we will find a solution to cover the already-invested costs,” Larsson added.