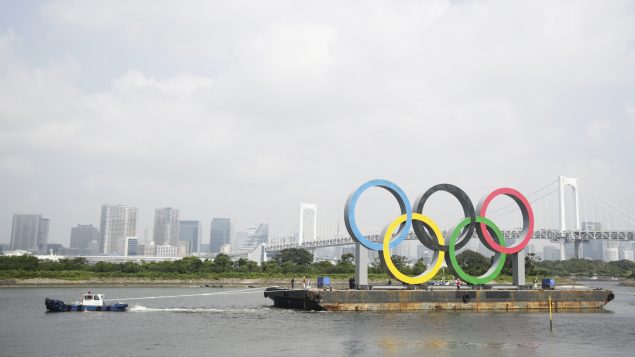 A tugboat moves a symbol installed for the Olympic and Paralympic Games Tokyo 2020 on a barge moved away from its usual spot off the Odaiba Marine Park in Tokyo Thursday, Aug. 6, 2020. (Hiro Komae/The Canadian Press/AP)

Canadian athletes are asking the International Olympic Committee (IOC) to clarify and define the certain aspects of their anti-protest rule.

In a statement on Monday, Canadian Olympic Committee Athletes’ Commission (COC AC), have put forward seven recommendations to the IOC’s Rule 50, which states that “No kind of demonstration or political, religious or racial propaganda is permitted in any Olympic sites, venues or other areas.”

Earlier this year, the IOC developed Rule 50, which specifies which types of protests athletes would be able to partake in during the Olympics, in order to provide a framework to “protect the neutrality of sport and the Olympic Games.”

As part of the COC AC’s seven recommendations, Canadian athletes asked that the IOC clearly define what constitutes a demonstration, protest of propaganda, as well as establish parameters for what is viewed as an acceptable demonstration that is peaceful and respectful of other athletes and countries.

They also asked that the IOC maintain or create neutral spaces that allow for peaceful demonstrations that do not interfere with the competition.

According to the IOC’s Rule 50, athletes are prohibited from taking a political stand in the field of play, in the Olympic village, or any official or medal ceremonies so no taking a knee, or no raised fists.

The only place athletes would be able to protest is during press conferences, at team meetings, or on digital media.

“Based on our findings, our recommendations focus on asking for more clarity and advocating for the IOC Athletes’ Commission to explore and define meaningful ways to peacefully protest or demonstrate while respecting other athletes and countries, ensuring non-interference with competition and protecting from demonstrations contrary to the values of Olympism or that are otherwise harmful, misleading, discriminatory or based on hate.” Oluseyi Smith, two-time Olympian and COC AC Chair

“We will continue to work closely with the IOC Athletes’ Commission and encourage all Canadian athletes to participate in their global survey launching this fall,” Smith added.

The COC AC also recommended that the IOC clearly define and outline the consequences, and degrees of violations around demonstrations, protests and propaganda. The IOC’s Rule 50 currently only says that disciplinary action will be taken on a case by case basis.

Two-time Olympic champion in trampoline and COC AC Vice-Chair, Rosie MacLennan, said that a wide range of feedback was solicited from as many stakeholders as possible to balance the varying viewpoints and communicatie the majority perspective as well as highlight where Canadian athletes did not have strong collective perspectives.

The COC AC’s seven recommendations to the IOC are listed below :