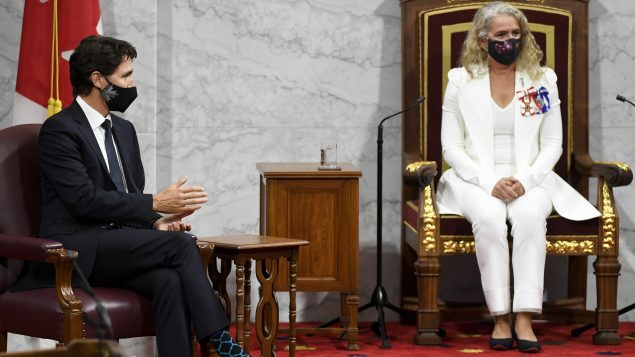 The Liberal government promised to spare no effort in fighting the COVID-19 pandemic and do “whatever it takes” to support Canadian people and businesses through the ongoing crisis “as long as it lasts” as it outlined its priorities for the new session of Parliament.

The Liberals are pledging to create over one million jobs, build a more resilient economy, boost and extend existing aid programs, while fighting climate change and tackling systemic racism.

Gov. Gen. Julie Payette outlined in large brush strokes the minority Liberal government’s priorities in the speech from the throne, detailing a four-pronged approach to fighting the pandemic and economic recovery.

“This is our generation’s crossroads. Do we move Canada forward, or let people be left behind? Do we come out of this stronger, or paper over the cracks that the crisis has exposed? This is the time to remember who we are as Canadians,” Payette said, reading from the speech in the Senate Chamber.

“This is the opportunity to contain the global crisis and build back better, together.”

‘This is not the time for austerity’ 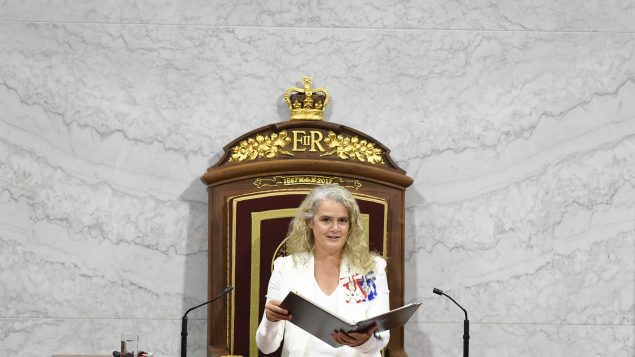 The economic impact of COVID-19 on Canadians has already been worse than the 2008 financial crisis, Payette said.

“These consequences will not be short-lived,” said Payette, reading from the speech.

“This is not the time for austerity.”

To help businesses weather the economic storm, the Liberal government plans to extend the Canada Emergency Wage Subsidy right through to next summer, Payette said.

The program, which aims to keep employees on the payroll to ensure a smooth post-pandemic economic transition, covers 75 per cent of employee wages, up to $847 a week.

The Liberals also promised to reform Canada’s employment insurance (EI) system to include self-employed workers and those in the so-called “gig economy,” as unemployment hit double digit numbers.

Investment in child care and long-term care for the elderly 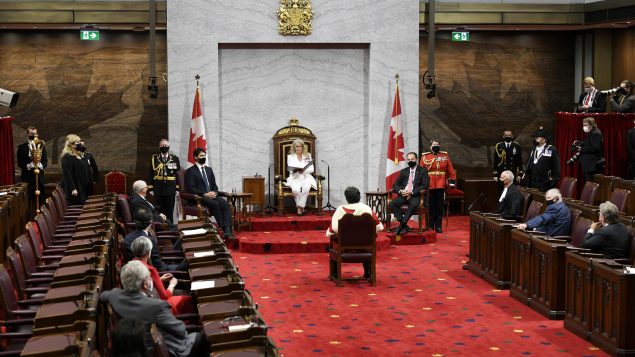 The Liberals are also pledging to make a “significant, long-term, sustained” investment in a national early learning and child care system.

“Many women have bravely served on the frontlines of this crisis, in our communities or by shouldering the burden of unpaid care work at home,” Payette said, reading from the speech.

“We must not let the legacy of the pandemic be one of rolling back the clock on women’s participation in the workforce, nor one of backtracking on the social and political gains women and allies have fought so hard to secure.”

The government is also pledging to address gaps in the long-term care homes for the elderly.

The Liberals say it will work with the provinces and territories, which under the Canadian constitution are the responsibility of provincial and territorial governments, to establish national standards of care.

“Elders deserve to be safe, respected, and live in dignity,” Payette said. “Although long-term care falls under provincial and territorial jurisdiction, the federal government will take any action it can to support seniors while working alongside the provinces and territories.”

The government is also eyeing a new disability benefit, which would be modelled after the guaranteed income supplement (GIS) for seniors, as well as a new employment strategy for people with disabilities.

The Liberals are also promising to make “substantial investments” in housing for Canadians.

The government is promising to continue its goal of reconciliation with Indigenous Canadians, address systemic racism against racialized communities and Indigenous peoples by cracking down on online hate, improving data collection and implementing an action plan for diversity hires in the public service.

The Liberals also committed to introduce legislation to implement the United Nations Declaration on the Rights of Indigenous Peoples before the end of 2020.

The Liberal government is also pledging to protect and promote French language in Canada, the country’s second official language.

“The government of Canada must also recognize that the situation of French is unique. There are almost eight million Francophones in Canada within a region of over 360 million inhabitants who are almost exclusively Anglophone,” Payetter read from the speech.

“The government therefore has the responsibility to protect and promote French not only outside of Quebec, but also within Quebec.”

‘The world’s top destination for talent, capital, and jobs’

The Liberals are also promising to make it easier for people to immigrate to Canada and ensure that immigration is one of the main drivers of Canada’s economic growth.

“With other countries rejecting global talent that could help their economy, Canada has an opportunity as we recover to become the world’s top destination for talent, capital, and jobs,” Payette said.

“When people choose Canada, help build Canada, and make sacrifices in support of Canada, we should make it easier for them to formally become Canadian.”

On the international scene, the Liberals said they plan to invest more in international development while supporting developing countries on their economic recoveries and resilience.

“Canada will also support work to ensure that people around the world have access to a vaccine,” Payette read from the throne speech. “We cannot eliminate this pandemic in Canada unless we end it everywhere.”

The government will also continue to stand up for human rights and the rule of law, she added.

“It is unacceptable that any citizen be arbitrarily detained. Michael Kovrig and Michael Spavor must be brought home,” Payette said, referring to the two Canadians detained by China. “This is something for which all Canadians stand united.”

The Conservatives, who are the second largest party in the House of Commons, were quick to slam the speech as “typically Liberal” and said they will not support it.

“It is another speech that is full of Liberal buzzwords and grand gestures with very little to no follow-up plan,” she said. “It doesn’t speak at all of national unity, it doesn’t speak of our energy sector and our workers in Alberta, Saskatchewan and Manitoba and it doesn’t talk about agriculture.”

The minority Liberal government would need the support of the centre-left New Democratic Party to survive the confidence vote on its speech from the throne.

NDP Leader Jagmeet Singh refused to say whether his party will support the Liberals during the upcoming confidence vote in the House of Commons.

However, when pressed on whether the NDP will support the Liberals if those two conditions are not met, Singh said the New Democrats will take their time to evaluate the speech but have not made a decision yet.