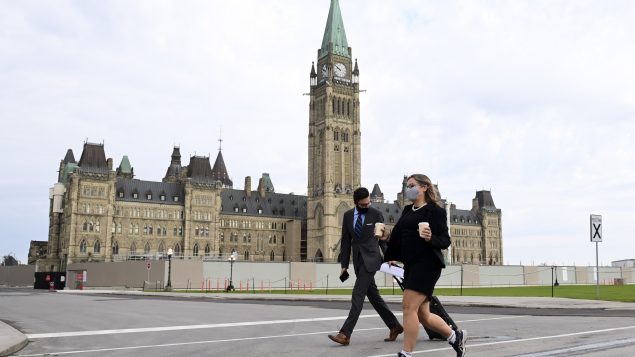 The fate of Liberal government of Prime Minister Justin Trudeau hangs in the balance as Parliament resumes full operations on Thursday for the first time since the pandemic shut down normal operations in March.

The minority Liberals, who govern without a formal coalition partner in the House of Commons, need to secure the support of at least one of the three major opposition parties to survive a confidence vote on their priorities presented in Wednesday’s speech from the throne by Gov. Gen. Julie Payette.

The Liberals currently hold 154 seats, the Conservatives have 121, the Bloc Quebecois has 32, the New Democratic Party has 24, the Green Party has three and there are two Independents and two vacancies.

The Conservatives, who are the Official Opposition, have firmly rejected the Liberal agenda.

The Bloc Quebecois, a party that advocates for Quebec’s separation from Canada, has ruled out supporting the Liberals unless they agree to stop meddling in matters that fall under provincial jurisdiction – such as healthcare and education – and transfer billions of dollars in additional health funding to Quebec and other provinces to help them fight the pandemic.

Bloc Quebecois Leader Yves-Francois Blanchet gave the Liberals one week to comply with his demand, threatening to vote against the speech from the throne if his demands are not met.

That leaves the centre-left New Democratic Party, whose leader, Jagmeet Singh, has presented his own demands to the Liberals.

The NDP wants the Trudeau government to make sure that there will be no reductions in payments to jobless Canadians as the government winds down its ad hoc emergency supports to people who lost their jobs during the pandemic and transfers them into the regular but more restrictive employment insurance system.

The NDP also wants the Liberals to institute universal paid sick leave to make sure that workers who are diagnosed with COVID-19 don’t lose income because they are unable to work.

Speaking to reporters after the speech from the throne on Wednesday, Singh, however, refused to say whether the NDP is ready to vote against the Liberal plan and trigger a snap election.

The government must allow for six days of debate on the throne speech, but they don’t have to be consecutive days.

Under a motion passed unanimously Wednesday, all parliamentary functions are now restored, albeit with a new hybrid model House of Commons.

Until at least Dec. 11, only a small number of MPs will be physically present in the chamber while the rest will participate virtually, including taking part in roll-call votes via video conference.