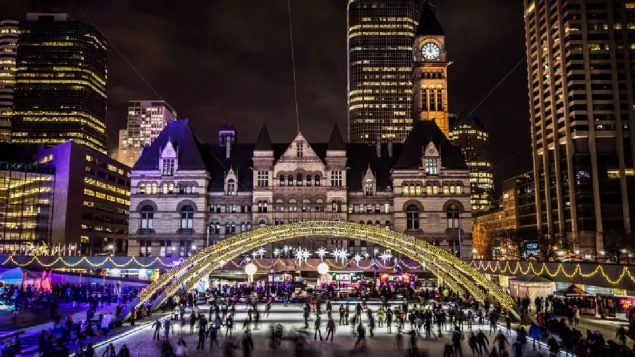 New Years even is always a huge event at Toronto City Hall, with skating, live music and fireworks, but not this year thanks to COVID-19 ( Mark Blinch-The Canadian Press)

In an effort to prevent the spread of COVID-19, virtually all major events across the country were cancelled this year. This includes parades, festivals, large ethnic and religious celebrations, fairs, exhibitions and sporting events.

The loss of these events has been a huge economic blow to cities and communities, and to the organisations, mostly non-profit, that depend on such revenues.

Toronto, is Canada’s largest urban centre with almost three million residents, and almost another three million in the surrounding urban ‘greater Toronto area’ (GTA). The city, which had banned such events at the start of the pandemic starting mid-March and extended repeatedly, has just announced another extension.

Toronto announced on Wednesday that all city-led and city sponsored events will be cancelled until the end of the year.

The city announcement says the cancellation “is based on public health advice and includes festivals and other large in-person gatherings held at outdoor sites managed by the City or other public locations, such as roads, parks and Civic Squares.”

This includes gathering for the huge Santa Claus parade, and even New Year’s Eve in the large Nathan Phillips square in front of city hall will not take place.

However, there are a few exceptions : “This announcement does not include outdoor sport facility permits and activities; and other City facilities/sites that are permitted in Stage 3 of the Province of Ontario’s Framework for Reopening and comply with the current gathering limit restrictions. Professional sporting events are also not included in this decision.”

Because many cultural organisations depend in large measure on revenues from their events, the city says it has created the  Cultural Festivals Recovery Program (CFRP), and will  providing $565,000 in support for cancelled cultural events.

Many of the cancelled public events will take place online, although clearly without the same atmosphere.

Among events switched to the virtual experience are Nuit Blanche – an all-night party – and the 115th Santa Claus parade.

Below is the list of events cancelled or altered in Toronto and the GTA. The listing of “pending’ means organisers have not yet decided whether to cancel or alter the event.