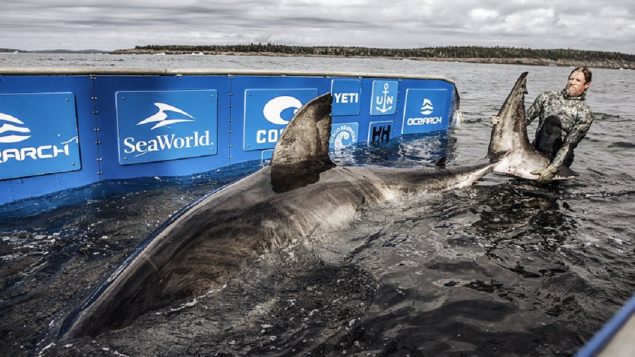 The research group Ocearch tagged its largest shark off Nova Scotia this month. "Nukumi' is some 5m long ( Twitter- Ocearch)

A research vessel conducting tagging and tracking of great white sharks, has caught a huge shark off the coast of Lunenburg, Nova Scotia.

The  huge specimen, a female, is estimated to be about 50 years old and measures some 5 metres in length (17ft)

Chris Fischer leading the American-based Ocearch team said the shark weighing over 1,600 kgs (over 3,500 lbs) was the biggest his team had ever tagged in the northwest Atlantic.

The shark is gently towed over to the resararch vessel. a short distance away, (screen grab Ocearch video)

They dubbed her “Queen of the Ocean”. but named her ‘Nukumi’ ‘(noo-goo-mee)  a figure from Nova Scotia’s Mi’kmaw culture of a wise grandmother. After tagging and collecting samples, the shark was released back into the ocean.

The team has had difficulties in tagging this year due to two tropical storms and a hurricane. 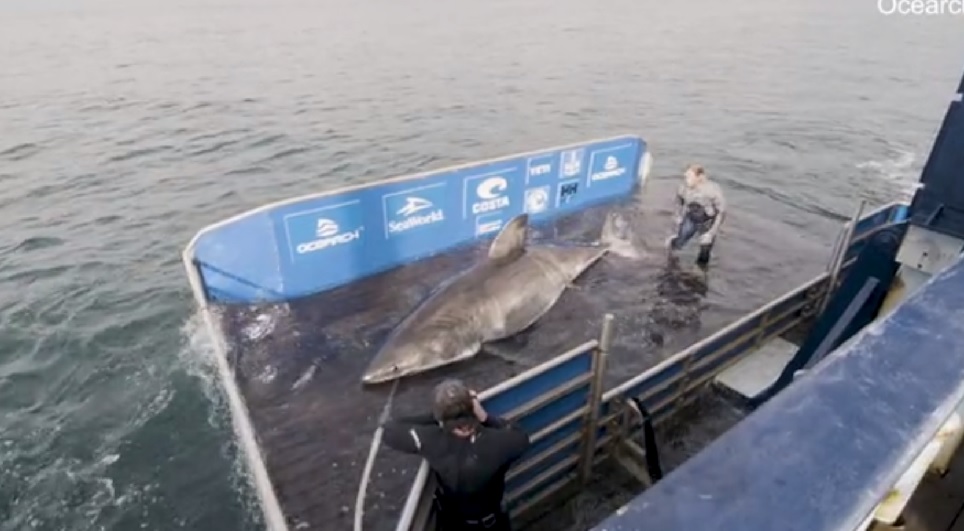 Sharks are guided into a submerged ;platform beside the ship, Once inside the enclosure, the platform is raised out of the water for researchers to take samples and tag the shark after which the platform is lowered back into the ocean and the shark swims away (screen grab Ocearch)

He said three of the four sharks tagged so far are “pinging’ and can be tracked on the Ocearch tracking website. Blood samples and mouth bacteria samples are also taken to aid in other shark research projects and to determine health of the animals.

Ocearch has tagged some 17 sharks during expeditions in 2018 and 2019. The effort is to track the sharks to better understand their movements and why they move in such wide patterns. 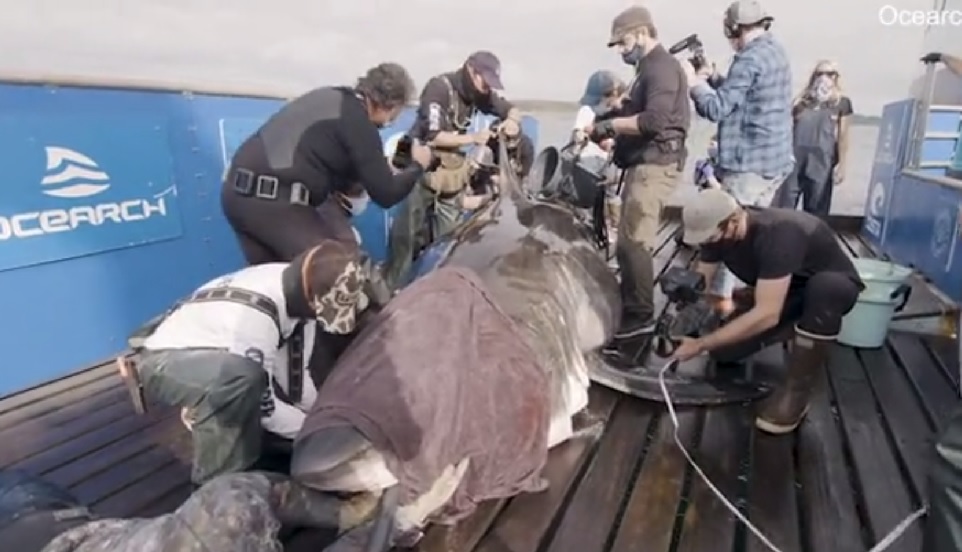 A team of researchers work quickly to take a variety of samples and measurements on Nukumi, and tag ithe animal with a tracker before releasing safely back into the water (screen capture Ocearch)

Canadians have reported an increase in shark sightings off Nova Scotia in recent years,  and a beach was closed in August for a short while when a shark was spotted close to shore. Fischer says the sharks may have been in the area all along but people are just noticing them more.