Canada may be accepting Hong Kong pro-democracy protesters as refugees

Canada may be willing to accept pro-democracy protesters into the country under asylum rules in what may be a sign of willingness to accept people fleeing increased Chinese control in the former British colony.

The respected Globe and Mail newspaper reports that a couple from Hong Kong who came to Canada in December 2019 claiming asylum, received word in September this year that they have been accepted as “convention” refugees. This refers to the U.N convention on refugees, which under Canada’s Immigration and Refugee Protection Act, defines a ‘convention” refugee as someone who refuses or cannot return home over “well-founded fear of persecution due to race, religion, nationality, or political opinion’.

In the independent Hong Kong Free Press, the 33 year-old man said he had been a recognized pro-democracy protester and had produced safety equipment for other protesters. He said police had been following him and had raided his home. His 30 year-old wife also took part in the demonstrations against Hong Kong legislation to enable extradition to China.

While that law was eventually withdrawn in the face of massive and occasionally violent protests, China has since imposed a sweeping ‘security’ law that effectively squashes almost any form of protest or dissent in Hong Kong. 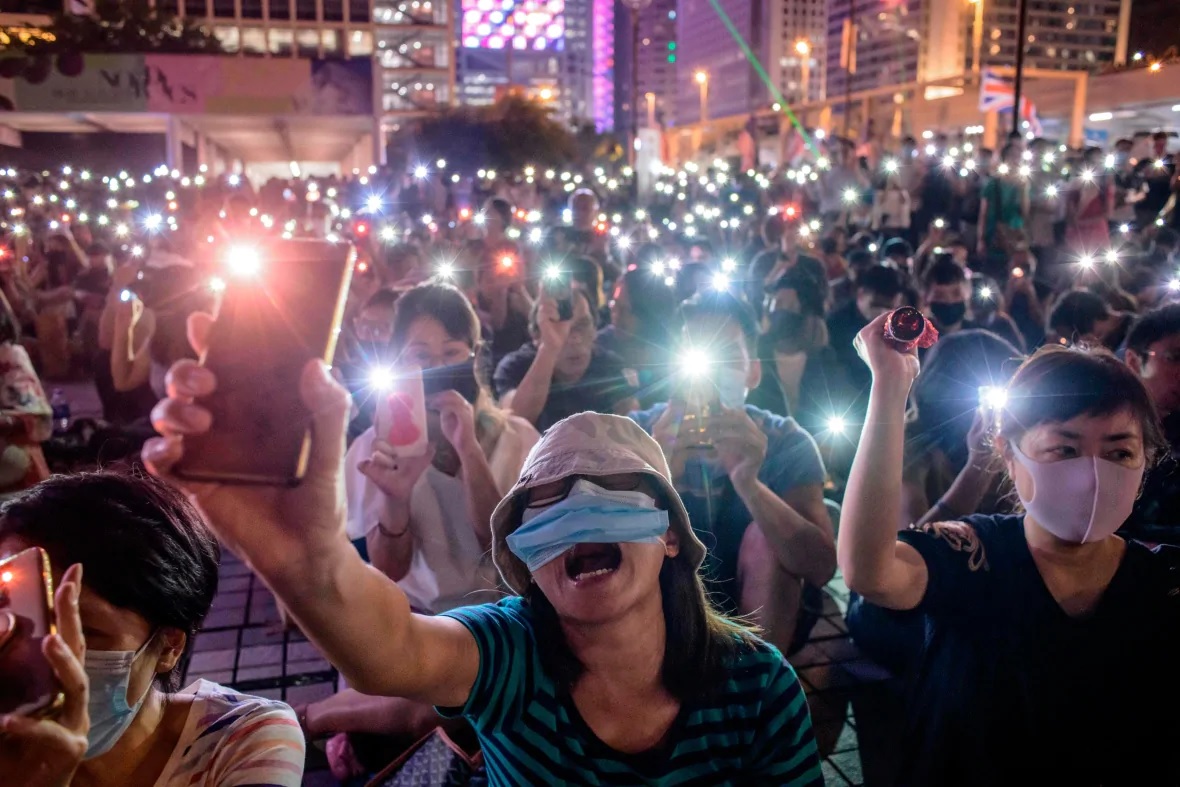 Attendees shout slogans during a rally to show support for pro-democracy protesters in Hong Kong in October 2019. New security laws since imposed by China would result is harsh penalties for anyone engaged in protest or dissent. (Ed Jones/AFP via Getty Images)

The couple do not want to be identified for fear of government reprisals against family and friends in Hong Kong. There have been many anecdotal reports of Chinese government inspired intimidation of expats in Canada.  Chinese supporters of the pro-democracy here in Canada have claimed they have been harassed and threatened by pro-China groups here, and by anonymous online and phone threats. There have been as yet unfounded claims that some of the pro-China protesters, such as Chinese on student visas, have themselves been intimidated by Beijing to counter protest,

The Globe had earlier reported an unnamed source in the Immigration Department saying some 50 Hong Kong residents had claimed asylum between Jan 1, 2019 and March 31 2020. Their claims cite harassment, police violence and fears of arbitrary prosecution and imprisonment by authorities in Hong Kong.

While there has been an increased interest in emigrating to Canada, the current COVID-19 travel restrictions make it exceedingly difficult for foreigners to enter Canada.

In May of this 2018 Germany accepted two young men who were pro-democracy activists as political refugees.