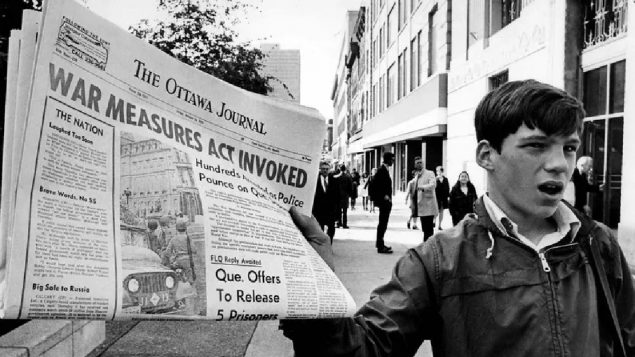 A newsboy holds up a paper with a banner headline reporting the invoking of the War Measures Act, in Ottawa, Oct. 16, 1970 the first time Canada had invoked the act in peacetime. The act was put into effect following the kidnapping of British diplomat James Cross and Quebec Labour Minister Pierre Laporte by the terrorist FLQ. d, and defends the terrorist FLQ .Teh federal Bloc Quebecois is today demanding an official apology (PETER BREGG / THE CANADIAN PRESS

Since the early 1960’s a small group of radical Marxists have been terrorising the province through bombs, robberies and deaths in their quest to turn the mainly French-speaking province of Quebec into a separate socialist country.

They called themselves the Front de Liberation du Quebec, widely known simply as the FLQ.

The movement gained support in July 1967 when French President De Gaulle cried out from a balcony in Montreal. ‘Vive le Quebec libre”..(long live a free Quebec).  The remarks ignited a diplomatic furor and he was immediately disinvited from visiting Canada with a reminder from then Prime Minister that everyone in Canada and every province was “free” and pointing out that in fact thousands of Canadians had given their lives while freeing France in two world wars.

By 1970, the multitude of bombings slowed as 23 of the FLQ members were in jail, four charged with murder. But the terrorism was not over. 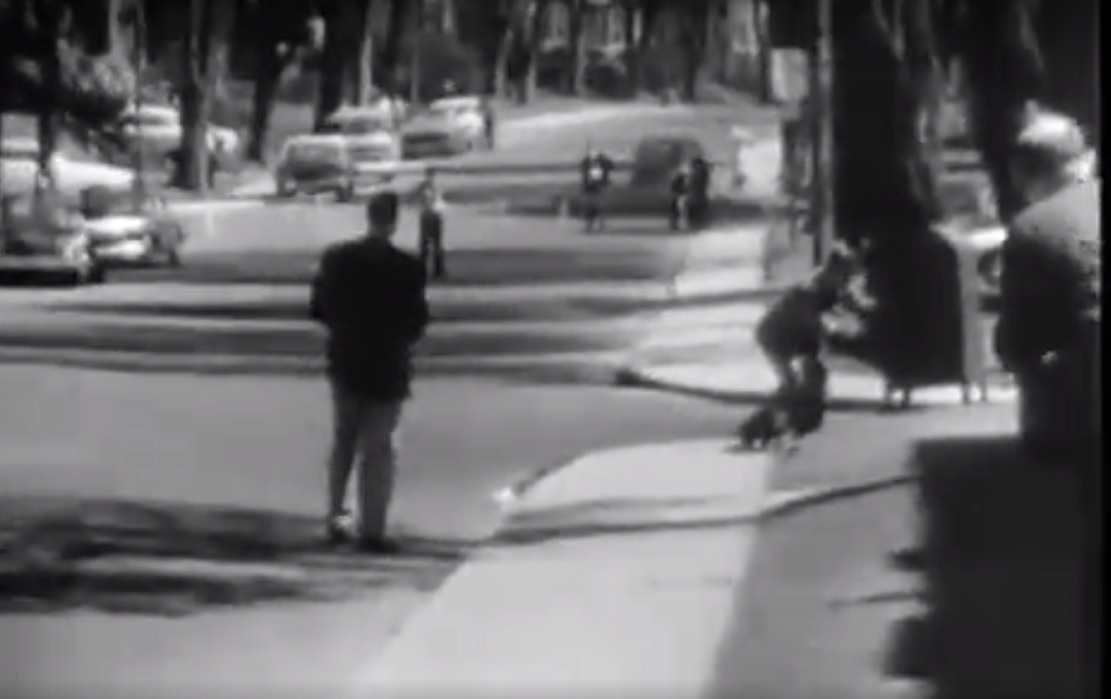 Army bomb disposal expert Walter Leja had already disarmed two mailbox bombs in Westmount, the predominantly anglo area of Montreal, and was disarming this third one when it blew up seconds after this image, leaving him permanently seriously maimed and disabled. (via CBC)

That year the group appeared to be developing a new tactic. In February, two members in a vehicle stopped by police were found with a sawed off shotgun and a ‘communique’ announcing the kidnapping of the Israeli consul. A later raid on a house in the Laurentians, north of Montreal, found guns, ammunition, 140-kgs of dynamite and indications the group intended also to kidnap the U.S. consul.

While those plans were interrupted, on October 5, one ‘cell’  succeeded in kidnapping British diplomat James Cross. Their demands included the public broadcast of their manifesto, money, release of prisoners and safe passage out of Canada to Cuba or Algeria.

In spite of the years of violence, the movement was strongly supported by Francophone youth in the province who had already staged several street protests.

On the 12th, Quebec-based military were called out to protect federal institutions.

The following day,  then Prime Minister Pierre Trudeau uttered three of the most famous words in Canadian politics. With soldiers on the streets in Montreal, when asked how far he would go in the crisis, he responded, “just watch me”.

He added having the military called in to protect people and the institutions of government against the blackmail of violence could not be tolerated saying, “society must take every means at its disposal to defend itself against the emergence of a parallel power which defies the elected power in this country and I think that goes to any distance. So long as there is a power in here which is challenging the elected representative of the people I think that power must be stopped and I think it’s only, I repeat, weak-kneed bleeding hearts who are afraid to take these measures”. 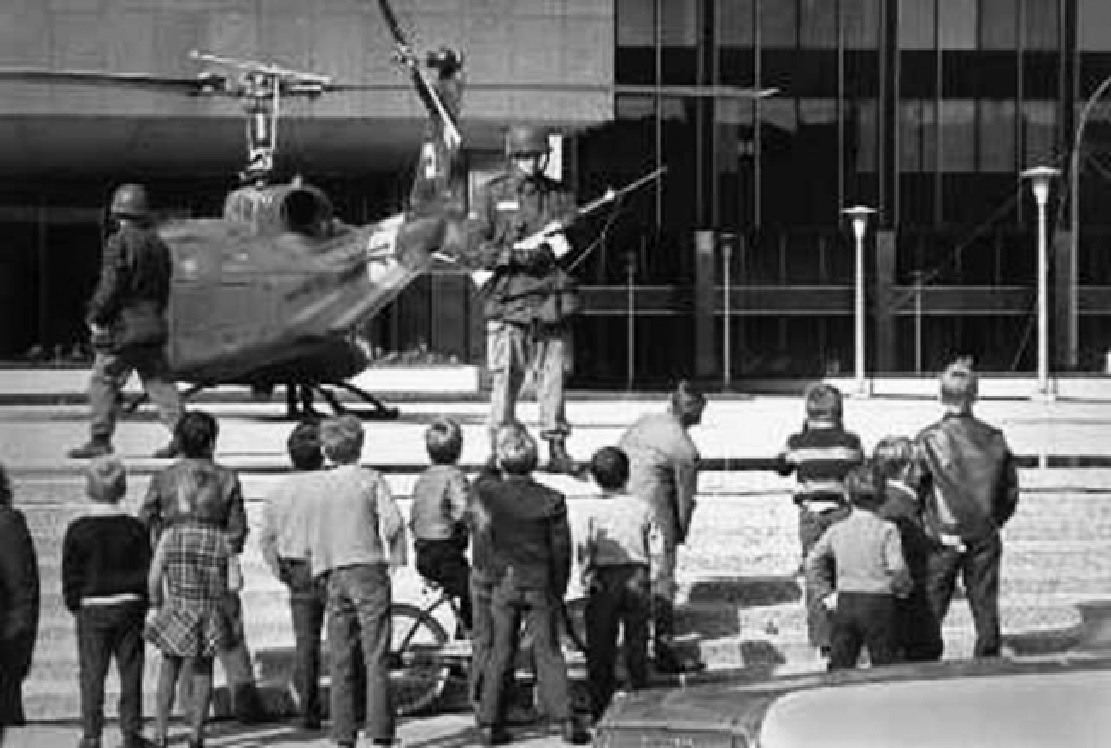 The following day some noted Quebec public figures call for an exchange of the jailed FLQ members for the two hostages.

On the 15th a massive rally of support for the terrorist group is called during which labour leader Michel Chartrand says to the cheering crowd of about 3,000, “We are going to win because there are more boys ready to shoot members of Parliament than there are policemen”.

The statement and what appears to be rising youth support also raises concern in the province and country about an insurrection,  That day the provincial government makes a formal request to the federal government for military support to “aid the civil authority’. The next day, the province adds a request for ’emergency power’ of arrest.

What has been deliberately downplayed and ignored ever since by the separatist Party Quebecois, is that they supported the motion.

The crisis is approaching its peak on this day.

A great many in Quebec, and Canada were shocked to see armed military personnel in the streets of the major cities of Montreal, Quebec and to a lesser extent in the national capitol Ottawa. The “War Measures Act” was declared by Prime Minister Trudeau in a nationally broadcast 20 minute speech in which he explained it was a moment of “grave crisis when violent and fanatical men are attempting to destroy the unity and freedom of Canada”, Several hundred suspected FLQ sympathisers will be summarily arrested.

It will be the first and only time such measures have ever been implemented in peacetime, and to this day reverberates still in the province.

The next day the FLQ announces they have executed Pierre Laporte and indicate where his body can be found stuffed in a car trunk. While the hundreds of bombs, the killings and maimings over the years had surprisingly not seemingly diminished support for the FLQ, the murder of the Quebec politician did. Support vanished almost overnight.

The death will later be claimed and widely supported in following years by sympathetic media to have been an accident. Also widely ignored to this day is a Gallup poll of December 1970 which showed 86 per cent of French-speaking Canadians supported the introduction of the Act, along with 89 per cent support of English speaking Canadians.

After the shock of Pierre Laporte’s killing, and  with some 5,000 soldiers guarding buildings and helping with searches, the terror in the province calmed.

In December a deal was reached to fly the several members of the kidnapping group to Cuba in exchange for the release of James Cross. They would spend years in exile. Later that month, the four kidnappers of Laporte had been found and jailed.

It was the murder of Laporte that changed the separatist movement, and no longer would terrorism or violence be involved. The idea remained and almost tore the country apart during two provincial referendums on separation of the province from Canada in 1980 and 1995; Led by the then governing separatist Parti Quebecois, both votes were narrowly won by those in favour of remaining within Canada.

There has not been a referendum since, even when the Parti Quebecois has been in power, but the idea of a separated Quebec country has never fully disappeared.