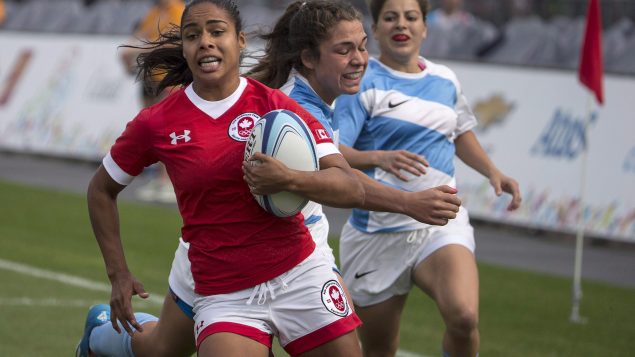 Canada's Magali Harvey (left) during women's rugby sevens action at the Pan Am Toronto 2015 games in Toronto on Sunday, July, 12 2015. Harvey is selected for both the World Rugby Women’s 15s Player of the Decade and the International Rugby Players Women’s 15s Try of the Decade. (Chris Young/The Canadian Press)

Canadian player Magali Harvey is the only player in North America to have been selected for the title of World Rugby Player of the Decade in 15-a-side rugby.

“I didn’t even know there was an event getting ready to celebrate the decade. It’s really a great opportunity to promote rugby. It was a nice surprise,” said the Quebecer, who won the title of international player of the year in 2014, in an interview with Radio-Canada Sports.

She faces three English, three New Zealanders, and one French, players from countries that are traditional rugby nations.

Harvey has also been selected for the International Rugby Players Women’s 15s Try of the Decade for a score against France in the 2014 World Cup semifinal. Canada won a scrum against the head and, three passes later, Harvey ran 80 metres for the try.

The try of the year nominees were chosen by international rugby players.

In all the nominees, there is only one other North American, Perry Baker from the United States, in Rugby Sevens.

“For me, it’s just a way, a way to show that rugby exists in Canada, in North America, and that it’s getting better, that we have our place among the best, despite the fact that we don’t play as much rugby in Canada,” added Magali Harvey.

After three years coaching the McGill Martlets Rugby, a Montreal university team, Harvey decided to focus once again solely on her own athletic career. She was supposed to leave for Spain with a professional contract in the fall, but the coronavirus pandemic forced her to stay home.

Harvey now hopes to be part of the Canadian team to play the 2021 Rugby World Cup in New Zealand before finishing her athletic career.

The World Rugby Awards are part of six fans’ choice categories with nominees selected from previous winners from 2010 to 2019. Fans have until Sunday, October 25th to vote on World Rugby’s website.

Winners will be announced during the virtual World Rugby Awards on Dec. 7.

With information from Radio-Canada Sport and The Canadian Press.