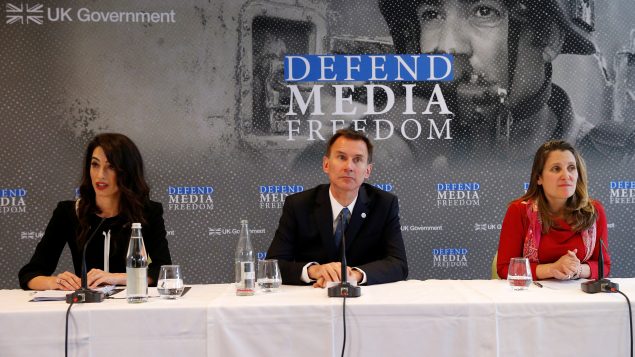 The online conference is expected to take place on Nov. 16 and will bring together representatives of traditional and digital media, civil society and various governments, Champagne said.

UN High Commissioner for Human Rights Michelle Bachelet will deliver the keynote address at the conference.

“A vibrant and free media is essential to democracy and human rights,” Champagne said in a statement. “During this critical time, we must stand together to protect the freedom of media workers who pursue necessary truths, within and beyond our own borders.”

Canada and the U.K. co-hosted the first Global Conference for Media Freedom in London in July 2019.

Since 2015, Canada has invested $18.2 million in programs supporting the media and the free flow of information, according to Global Affairs Canada.

Canada ranks 16th on the 2020 World Press Freedom Index, compiled by Reporters Without Borders (RSF), while Botswana is in the 39th place among the 180 countries represented in the index.

This 2020 edition of the Index suggests that the next ten years will be pivotal for press freedom because of converging crises affecting the future of journalism.

The index singles out five critical areas for the future of journalism in the next decade:

“We are entering a decisive decade for journalism linked to crises that affect its future,” RSF secretary general Christophe Deloire said in a statement.

“The coronavirus pandemic illustrates the negative factors threatening the right to reliable information, and is itself an exacerbating factor. What will freedom of information, pluralism and reliability look like in 2030? The answer to that question is being determined today.”