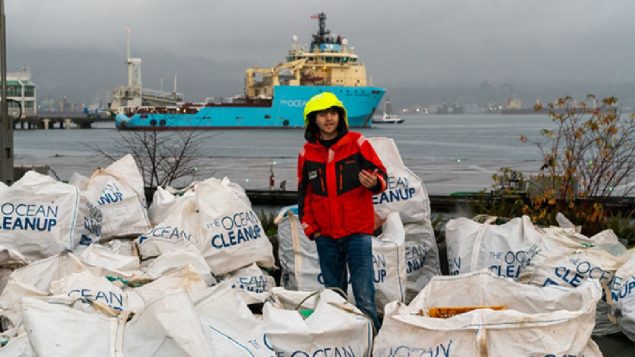 A modern world without plastics seems impossible, but that doesn’t mean we can’t do a much better job of recycling or making sure they don’t become harmful in the environment.

Many have heard of the Great Pacific Garbage Patch, perhaps the best known of several massive collections of plastics and other trash the ocean currents have pushed together.

A Dutch activist/inventor whose first project was in 2019 to bring a few tonnes of  that garbage to Vancouver’s shore for recycling, has expanded his project and technology. Boyan Slat is founder and CEO of Ocean Cleanup. 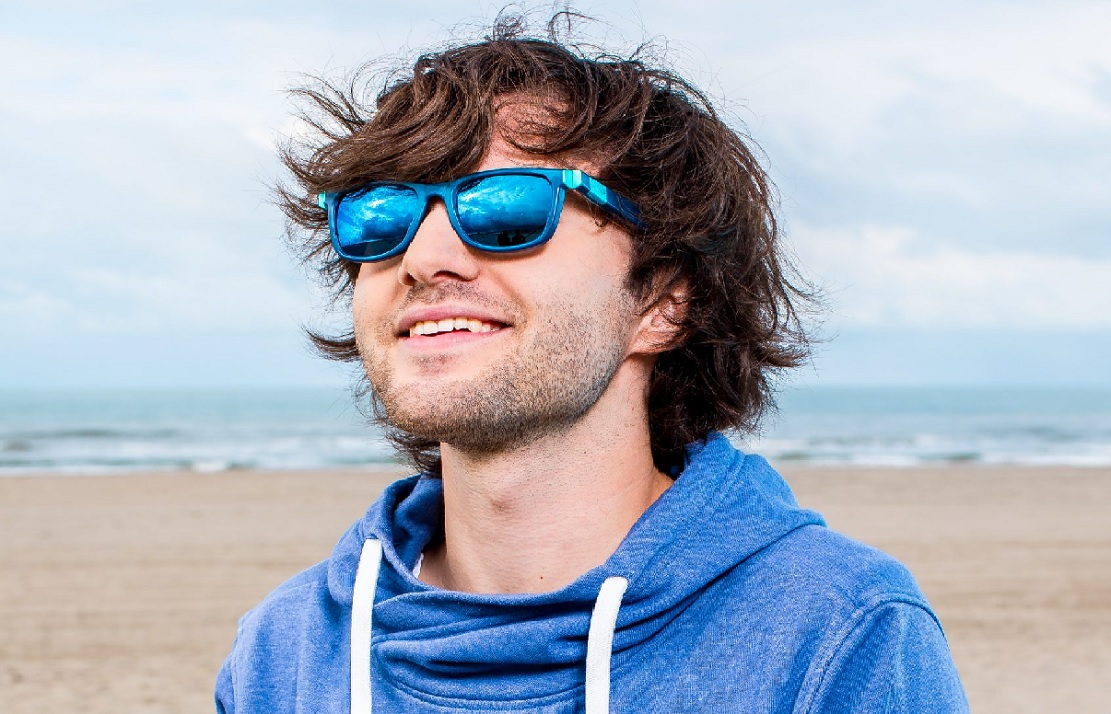 The non-profit project has developed technology to let the currents collect the vast amount of floating plastic into small easily collected areas.  The plastics are now being recycled into useable pellet form and have been turned into the first product made entirely from recycled ocean plastic. These are stylish UV sunglasses.  Money from their sale is said to go back into the capture and recycling of more ocean and river-borne plastic waste.

Meanwhile, a great deal of plastics also wash up on shorelines around the world. On the west coast in Powell River British Columbia, the province’s first ocean plastic recycling depot has opened this week. A press release from the Ocean Legacy Foundation and qathet Regional District (qRD) the depot will target material from shoreline cleanup efforts and legacy fishing and marine material in efforts to keep it from polluting the oceans  Material will be properly contained and items selected for recycling.

On the other side of the country in Nova Scotia, a woman is using collected shoreline plastic and junk to highlight the issue of ocean pollution and debris, She’s doing so in a unique way

She’s fashioned a variety of collected items into a scary Hallowe’en display. 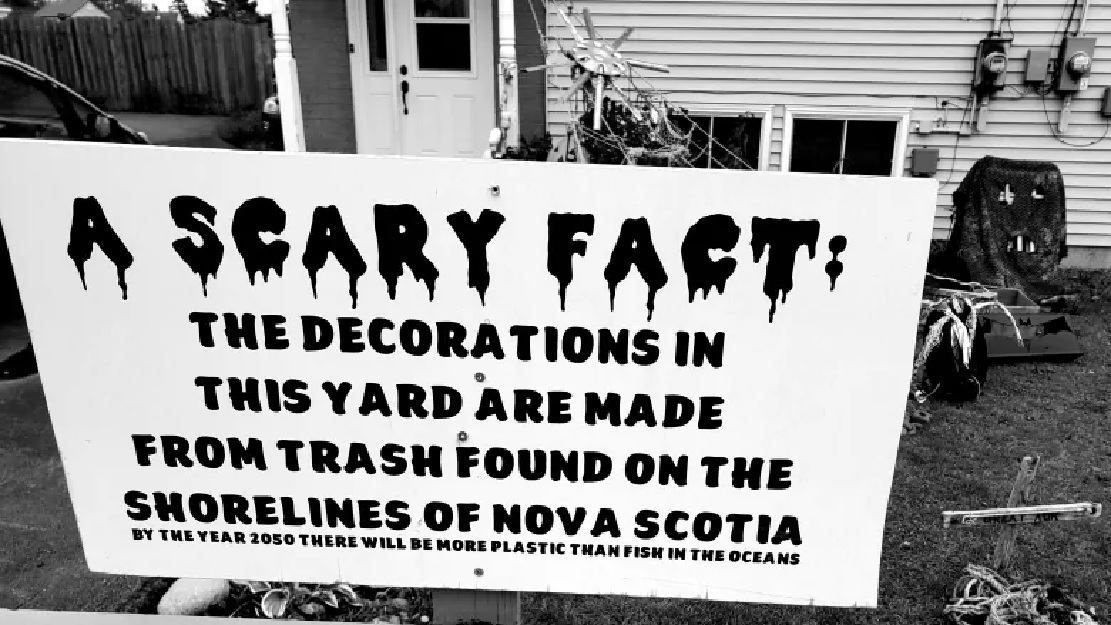 Angela Rily is founder of the recently created shoreline cleanup effort, Scotian Shores which is both a small business making bracelets and other saleable items from the debris as well as a community effort to remove trash from the beach for proper collection and/or recycling.

However, to highlight the issue of ocean pollution from garbage, she used crosses of driftwood and piles of discarded fishing lines in her Hallowe’en yard display, she also highlights the loss and extinction of some marine life, like the sea mink, great auk, and Labrador duck. 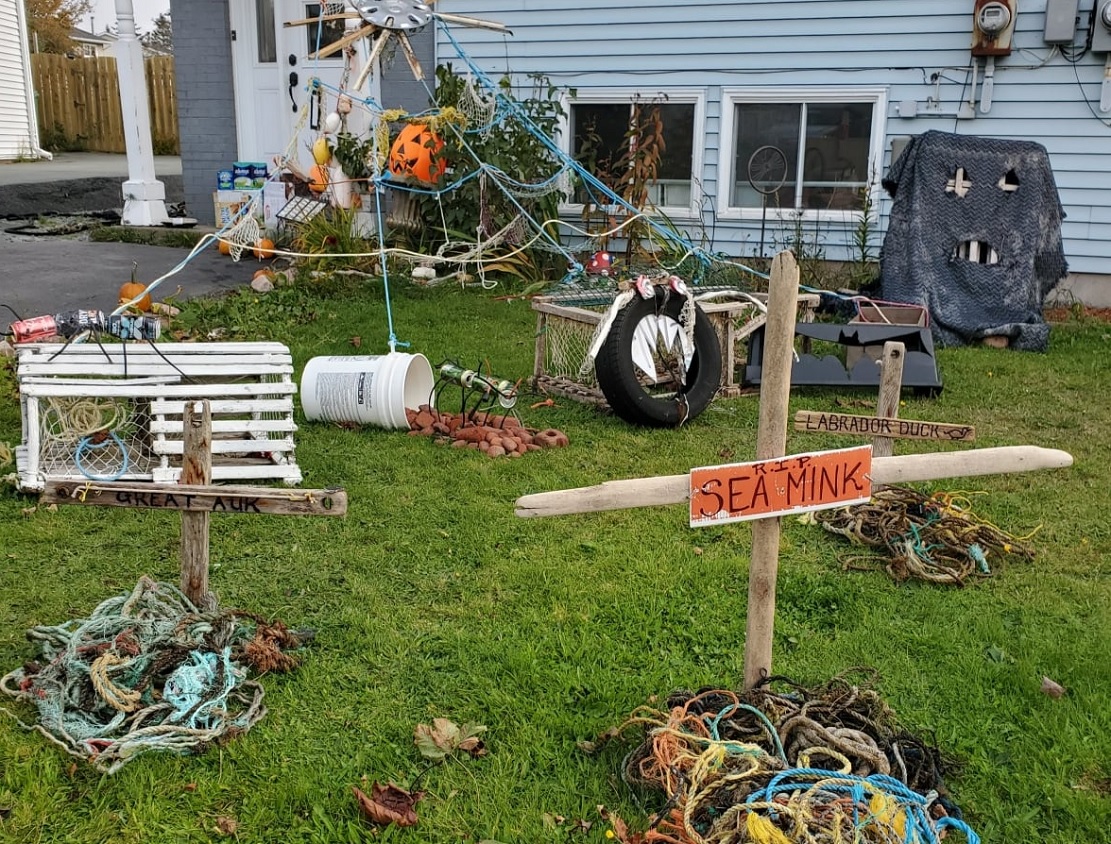 Although her efforts are relatively small, community members are joining the shoreline cleanup efforts.

In Canada, the government announced the start of bans on some single-use plastic products to come into effect late next year.

Canada’s federal agency, Fisheries and Oceans Canada (DFO) says about eight million tonnes of plastic ends up in oceans around the world every year.