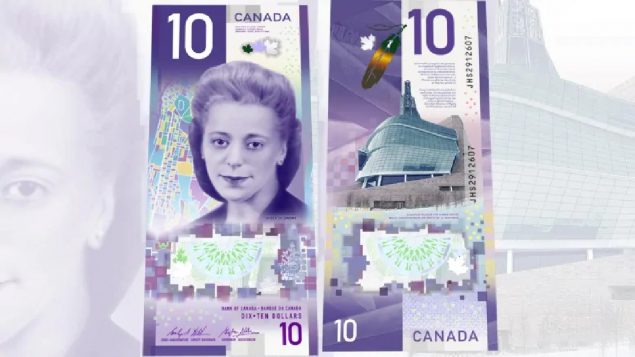 A change in Canadian banknotes was ushered in in 2018 to feature important Canadians who affected change in Canadian society, and also placed vertically for the first time. Black rights champion Viola Desmond was the first featured. A new face for the $5 bill is now being sought (Bank of Canada)

New Canadian banknote: but who will be featured?

Canada is beginning to change its banknotes once again.

The first major change came with the $10 note in 2018 when the image on the face was that of Viola Desmond, a black Nova Scotian businesswoman who fought for her civil rights years before the better known Rosa Parks in the U.S. It also placed the image vertically for the first time.  On the reverse is an image of Canada’s Museum for Human Rights.

The face of the current $5 note features former Prime Minister Wilfrid Laurier. He will be replaced by the new choice, but will appear again on a higher denomination in the future ( Bank of Canada)

The new image will be announced in early 2021. but the shortlist of candidates has been released.  The list was culled from over 45,000 suggestions by Canadians and then reduced to some 600 eligible candidates.

Candidates must have had an effect on Canada and Canadians for the better, must be known nationally, and reflect Canadian values.

Like the current VIola Desmond $10 note, this too will likely be a “vertical” note. The current figure on the $5 bill, former Prime Minister Wilfrid Laurier, will be continued but on a higher denomination. in the next redesign.

The first Canadian bank note series in 1935 featured the images of British royalty, In 1937 when King George V died, the Bank of Canada issued new designs featuring just the new King on most noted but past Canadian Prime Ministers Macdonald and Laurier on the big denominations with all notes having both English and French for the first time.

The next change came in 1954 with the “Canadian landscape’ series, followed in 1969 with the “scenes of Canada” series.

In 1986 the “birds of Canada’ series was printed. In 2001 the Canadian public was consulted on images representing Canadian culture and achievement in the “Canadian journey’ series. The ‘Frontier series” came in 2011, printed on polymer for the first time with images of space exploration and the Canadarm2, the Vimy war memorial, VIA passenger train from Toronto to Vancouver and past Prime Ministers, Queen Elizabeth continues to grace the $20 note.