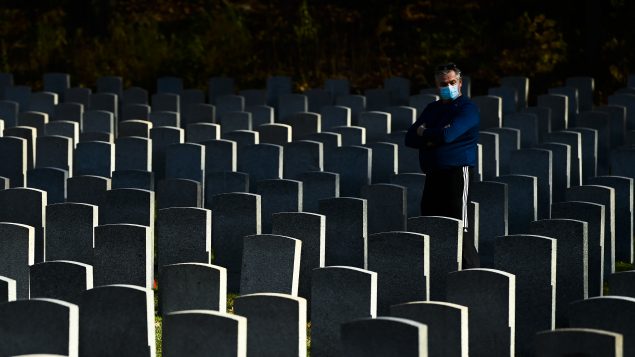 A man wearing a mask walks through the field of honour for fallen Canadian military war veterans at the Woodland Cemetery in Burlington, Ont. on Wednesday, a Remembrance Day like none before in Canada. (THE CANADIAN PRESS/Nathan Denette)

It was a Remembrance Day unlike any other across Canada on Wednesday as ceremonies honouring those who died and those who served felt the full force of COVID-19.

For years, participation has grown.

With coronavirus cases surging across most of the country, the Royal Canadian Legion explicitly discouraged Canadians from attending ceremonies in person this year.

Instead, the Legion asked people to watch on TV or online. 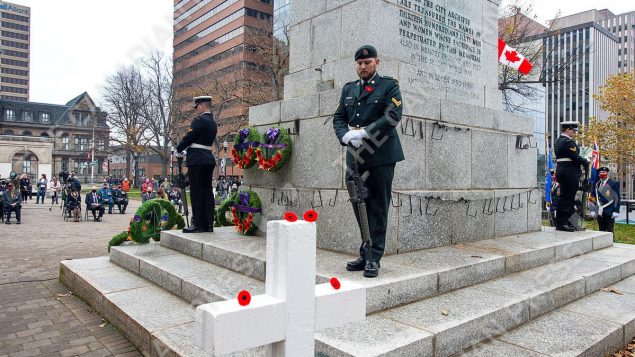 COVID-19 concerns kept participation and attendance way below normal at stripped-down Remembrance Day ceremonies across the country on Wednesday, including this one at the Grand Parade in Halifax. (THE CANADIAN PRESS/Andrew Vaughan)

Most observances were extremely small, including in Ottawa, where only about 100 people took part in a ceremony at the National War Memorial that usually attracts 30,000 participants and spectators.

Like many Remembrance Days, gloomy skies and falling drizzle seemed to suit the occasion as participants socially distanced while wreaths were laid, bagpipes, bugles and trumpets mourned and cannons boomed a 21-gun salute.

Both wore masks, as did almost everyone else.

Sullivan’s son, Lieutenant Chris Saunders, was killed when fire broke out aboard a Navy submarine in 2004. 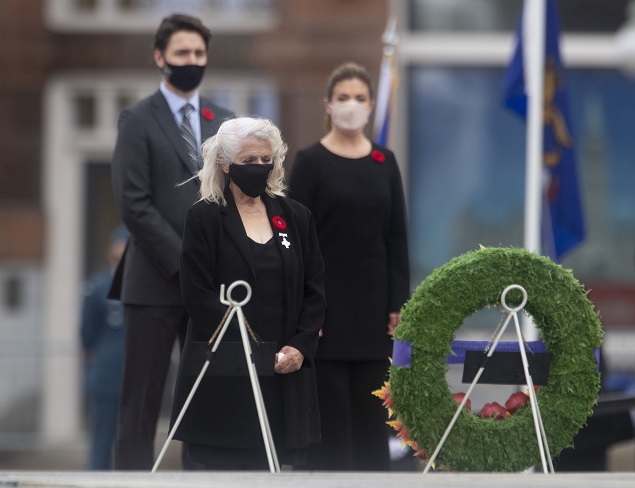 The national chief of the Assembly of First Nations, Perry Bellegarde, and the chief of the defence staff, Gen. Jonathan Vance, also participated.

Replacing the usual chorus of voices were three members of the Ottawa Children’s Choir, one of whom sang a solo rendition of the national anthem ahead of the two minutes of silence introduced by a bugle.

Another choir member later gave a solo performance of “God Save the Queen.”

There was a small military parade with a band, but no march of veterans and a planned flyby of military aircraft over downtown Ottawa was cancelled due to the weather.

Similar stripped-down ceremonies were held across the country. 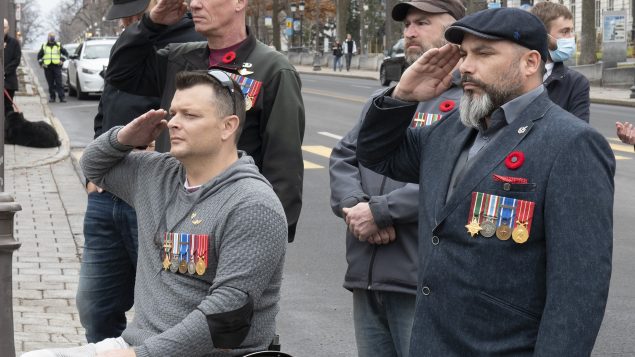 Because many commemorations planned for the spring in Europe and elsewhere also fell victim to the ill-effects of the pandemic, Wednesday’s ceremonies put special emphasis on marking the 75th anniversary of the end of the Second World War

To honour veterans of that conflict, private ceremonies were held across the country at long-term care facilities, where many of veterans now live in the shadow of the virus.

In normal times, many would have been participating in ceremonies. 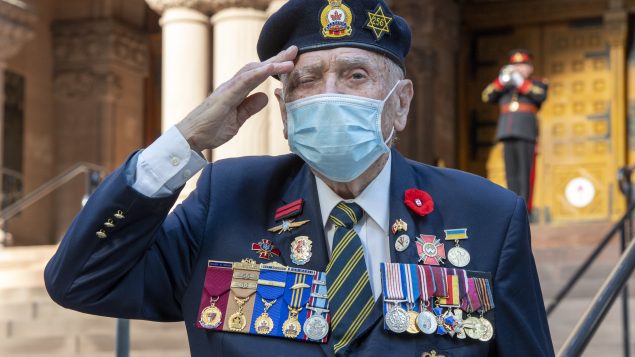 Armin Konn, 95, salutes during the playing of The Last Post after laying a wreath at Remembrance Day ceremonies at the Old City Hall Cenotaph in Toronto. (THE CANADIAN PRESS/Frank Gunn)

“It’s been 75 years since the end of the Second World War. Our veterans won many battles at great sacrifice” she said.

“Over 43,000 Canadians died. Many more came home wounded and carrying psychological scars from years of conflict, something that wasn’t talked about much at the time.”

“We remember them. Today and always.”

With files from CBC, The Canadian Press