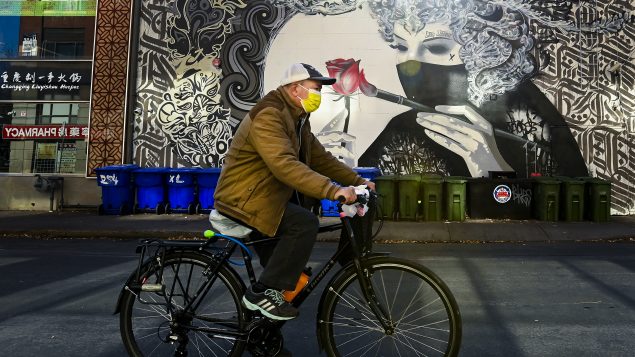 A man wearing a protective mask rides his bicycle past a face mask mural during the COVID-19 pandemic in Toronto on Thursday, as Canadians and their governments continue to try to keep up with the hard-charging virus, which continues to set records across the country. (THE CANADIAN PRESS/Nathan Denette)

As winter approaches and Canadians move indoors, governments across the country continue to seek ways to put the breaks on the coronavirus pandemic.

But COVID-19 continues to attack.

For the third time in seven days on Thursday, the country broke its daily record for reported cases as provinces announced new lockdown measures and officials continued to urge the public to take the pandemic seriously.

It was the worst day for infection since the pandemic began.

Nearly a third of those infections were in Ontario, where authorities reported a record number of 1,575 new cases, that included 18 deaths.

They came as new modeling predicted that Canada’s richest and most populous province could see as many as 6,500 new cases of COVID-19 daily by mid-December–unless steps are taken to limit the spread, according to new modeling released Thursday.

And that projection, according to Dr. Adalsteinn Brown, one of the experts behind it, might be “slightly optimistic.”

The 6.500 figure is based on a five per cent growth, Brown said, but over the previous three days the growth rate had been at six per cent.

The new cases announced Thursday pushed the seven-day average of daily cases to 1,299.

That’s the highest it’s been since the first confirmed case of the illness was reported in Ontario in late January.

At the province’s daily news conference Thursday, Premier Doug Ford said the numbers are “going in the wrong direction.”

In neighbouring Quebec, the province with the most COVID-19 cases in Canada, Premier François Legault said Thursday he may have to close schools this winter, by extending the holiday break in an effort to curb the spread of the virus.

Schools and workplaces have the highest rates of transmission, he told reporters at his Thursday briefing. The premier said the province had to close 324 schools in the past two days following COVID-19 outbreaks. 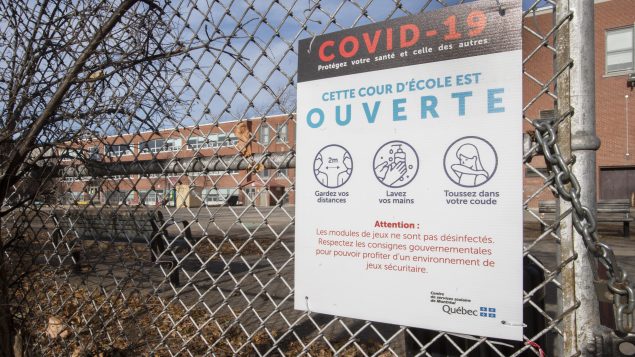 An empty schoolyard is seen in Montreal onThursday. Quebec is looking at the possibility of closing schools as the number of COVID-19 cases and deaths climb during the second wave of the pandemic. (THE CANADIAN PRESS/Ryan Remiorz)

Things were not going any better across the Prairies, which is dealing with more and more cases.

The province’s five-day test positivity rate — a rolling average of the COVID-19 tests that come back positive — is now 11 per cent, another record.

His warning came as the province entered the critical red zone of the province’s pandemic response system.

Masks will now be mandatory in indoor public spaces in Regina, Saskatoon and Prince Albert.

The measures come as Saskatchewan continued to log triple-digit increases of COVID-19 cases.

The province announced 111 new cases Thursday, the sixth-straight day with more than 100.

The increase in cases prompted hundreds of Saskatchewan doctors to sign an open letter to the provincial government demanding more action to combat the spread of the virus.

“It is becoming increasingly clear to us, physicians from across Saskatchewan, that we are losing the battle against this virus,” the letter states.

Meanwhile in Alberta, a group of more than 430 physicians and three major health-care unions sent a letter to Premier Jason Kenney Thursday endorsing the idea of a “circuit-breaker” targeted lockdown as cases of COVID-19 continue to surge in the province.

“There is no more time. We have to act now,” said Dr. Tehseen Ladha, who co-authored the letter. “We need something strong and mandatory in order to bend the curve.

Further west, officials in British Columbia said COVID-19 cases in the province are doubling every 13 days.

Officials announced an additional 1,130 cases in B.C. over a 48-hour period, and four more deaths. 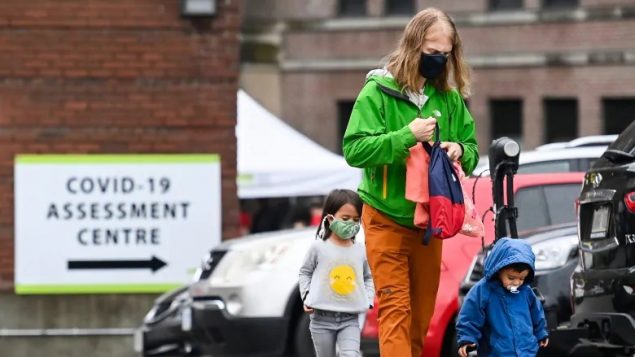 A family lines up to be tested for COVID-19 at a Toronto testing centre in September. (THE CANADIAN PRESS/Nathan Denette)

Across Atlantic Canada, which has closed itself off to and from outside travel for much of the year, one new case was reported, in New Brunswick.

No new cases were reported in Nova Scotia, Prince Edward Island and Newfoundland and Labrador.

Health officials in Yukon on Thursday announced a new case in Whitehorse, the 24th confirmed case in the territory.

The Northwest Territories reported four new cases in Fort Smith, all linked to one household. N.W.T. has now seen a total of 15 cases since the pandemic began.

In Nunavut, restrictions were increased in Iqaluit and Kivalliq after a COVID-19 case was reported in Rankin Inlet.

Until recently, the territory had no confirmed COVID-19 cases.

It now has three.