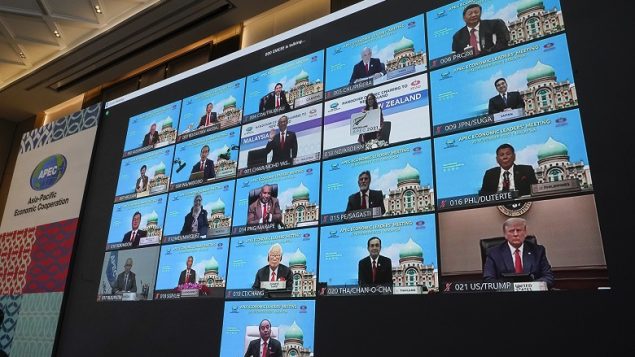 Prime Minister Justin Trudeau, along 20 other leaders at the Asia-Pacific Economic Cooperation leaders’ virtual summit hosted by Malaysia, has signed a declaration on free trade and digital innovation as a way to generate economic recovery from the COVID-19 pandemic.

The leaders came to the meeting hoping to find common ground on the issues and the declaration placed heavy emphasis on digital innovation, envisioning an “open, accessible and secure” telecommunications environment that would foster digital infrastructure development. 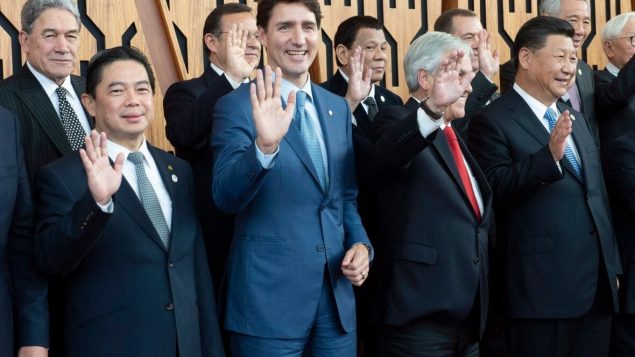 Prime Minister Justin Trudeau, second from the left, is pictured with other leaders in an APEC leaders group photo in Port Moresby, Papa New Guinea, in November 2018. This year, Trudeau is calling for more of the benefits of free trade and globalization to reach everyday people, particularly during the COVID-19 pandemic. (THE CANADIAN PRESS/Adrian Wyld)

Trudeau approached the meeting determined to promote the economic benefits of tackling climate change as well as doing business with Canada.

Speaking at the APEC CEO Dialogues on Thursday, he indicated that he planned to call for more of the benefits of free trade and globalization to reach everyday people, as well as to push back against growing protectionism around the world, particularly during the pandemic,

The summit came just ahead of this weekend’s G20 leaders’ summit, in Saudi Arabia, which was also expected to focus on economic damage brought about by the coronavirus pandemic.

It also came just days after China and nearly a dozen other countries signed onto the Regional Comprehensive Economic Partnership, which is now the world’s biggest free trading bloc, accounting for almost a third of all economic activity.

Lee Berthiaume of The Canadian Press reported that Trudeau stopped short Thursday of saying Canada was interested in joining the new regional partnership, but suggested Ottawa would watch to see how Beijing behaves in the trade deal.

China “is an important player in the global economy that we need to try and include and get to play by better international rules,” Trudeau said.

“So if the RCEP deal is able to actually start to create level playing fields, that’s going to be something very, very interesting.

So we’re going to watch carefully.”

With files from The Canadian Press (Lee Berthiaume), CBC News

(EDITOR’S NOTE: The original version of this story was updated to include the signing of the declaration.)