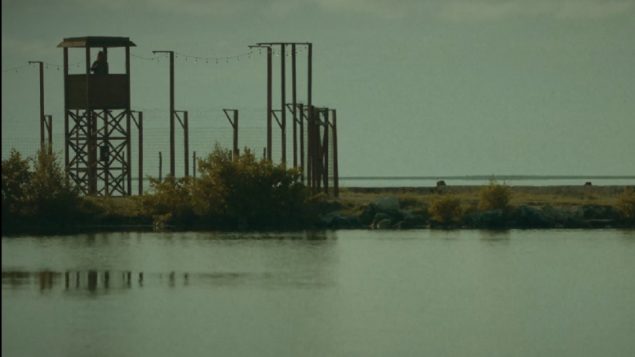 Hong Kong was invaded and occupied for almost four years in WWII. A truly unique new docu-drama examines that episode of almost forgotten and sometimes revisionist history. It's called "The Fence" (Tortuga Films)

Everyone has heard about the Japanese attack on Pearl Harbour but few may know that the same day a huge Japanese invasion force attacked the small garrison of the British colony of Hong Kong.  Among the small group of defenders were some 2,000 relatively ’green’ Canadians who had arrived only in mid November. Although the defenders, Canadian, British and Indian, valiantly held out against the vastly superior Japanese numbers and artillery, by December 25 surrender was inevitable. This began years of occupation of the colony, and brutal imprisonment for the defending survivors and harsh conditions for those in the colony.

A new, unique and important documentary will be shown this weekend,  It deals with the battle, but focuses to a far greater extent on  the years of Japanese occupation of Hong Kong in WWII.

It’s called, “The Fence”. It will have its world premiere in Canada on the documentary Channel Sunday,  December 6 at 9 p.m. ET/PT. 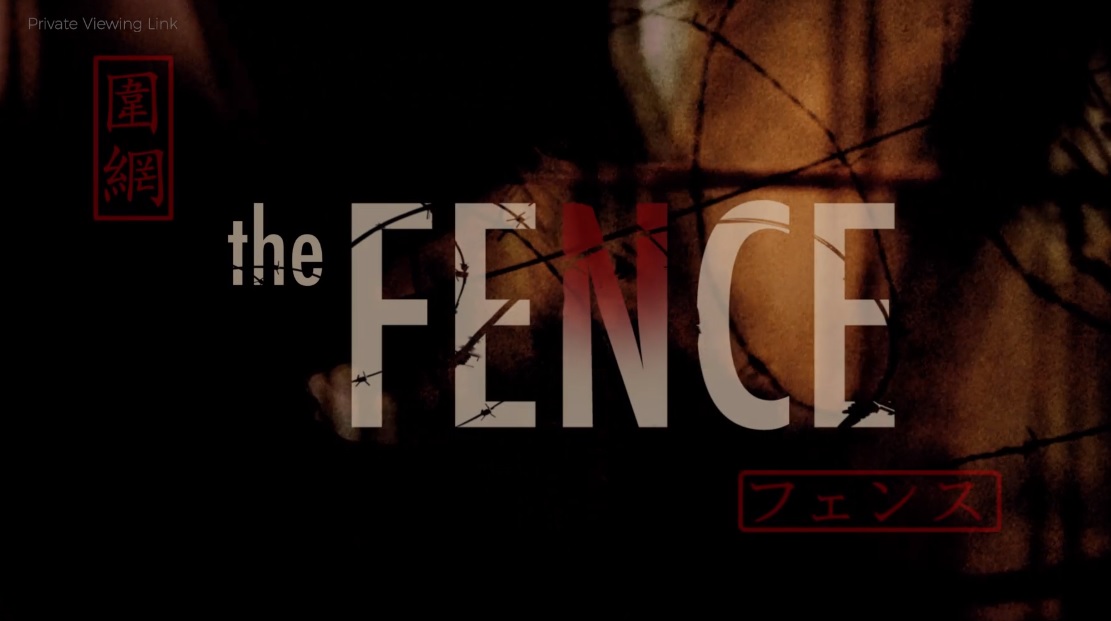 Interspersed with newly-discovered historical facts and personal recollections, some told for the very first time, along with archival and recreated footage.

The Fence features two tales, one from inside the prison camp from two surviving veterans, George MacDonell and George Peterson, and one from Luba Estes, aged ten at the time. Luba and her mother were prisoners of another sort in occupied and starving Hong Kong but were outside ‘The Fence” of the dreaded Sham Shui Po prison where her own father was imprisoned. Two historians, one Japanese and one in Hong Kong, also reveal verified new history that has been suppressed in Japan. 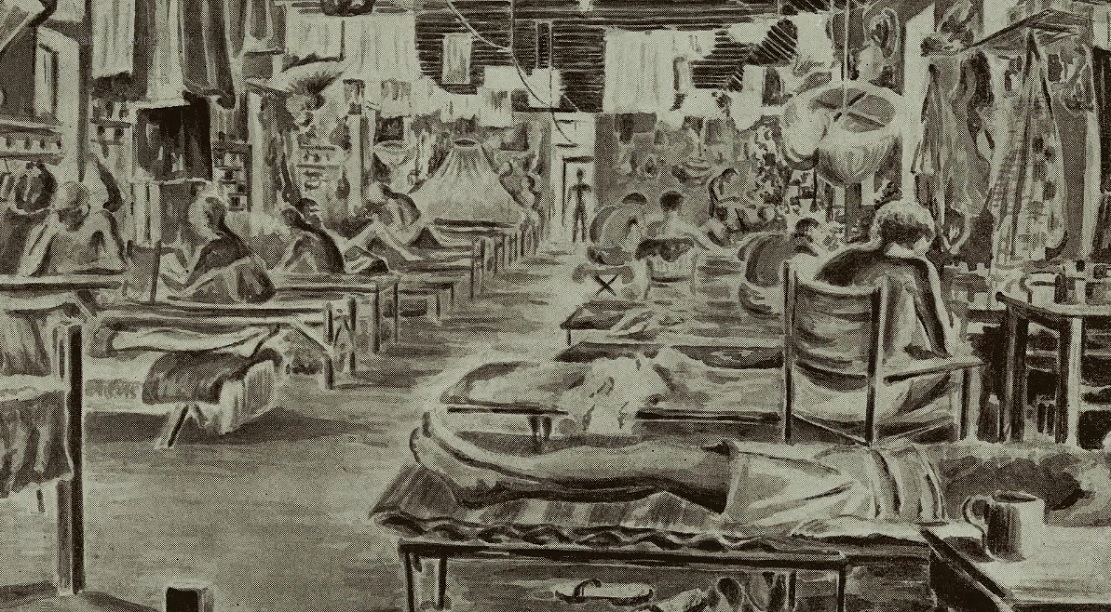 A drawing made by Luba Estes father inside the prison camp, .A White Russian living in Hong Kong,  Lt. Alexander V. Skvorzov was a member of the Hong Kong Volunteer Defence Corps (HKVDS) when the Japanese captured the city in 1941. He was imprisoned, along with British & Canadian troops in Hong Kong’s Sham Shui Po internment camp, where he spent the next three and a half years. He drew several images clandestinely in notebooks. When he was drawing, a fellow prisoner would stand guard and warn him when a Japanese guard was coming. He kept the notebooks hidden under his mattress or elsewhere, changing the hiding place every night so the guards wouldn’t find them. He also made 3 full books of the last words of each soldier. Each one wrote something in these books. Had they been found he would have been killed. Almost miraculously, the books were not discovered and both they, and Skvorzov survived the war, (The Fence-documentary)

It is at times a shocking film

Q-Before you made the film what did you know about the occupation of Hong Kong?

It was in meeting the Veterans of Hong Kong in the East of Quebec that I was introduced to the subject. I was not born in Canada. I was born in Senegal and educated in the UK. I came to Canada when I was 16. But Hong Kong became “the home of my heart”, to quote Luba Estes. I was, however, present in November 2019 for the second occupation of Hong Kong. 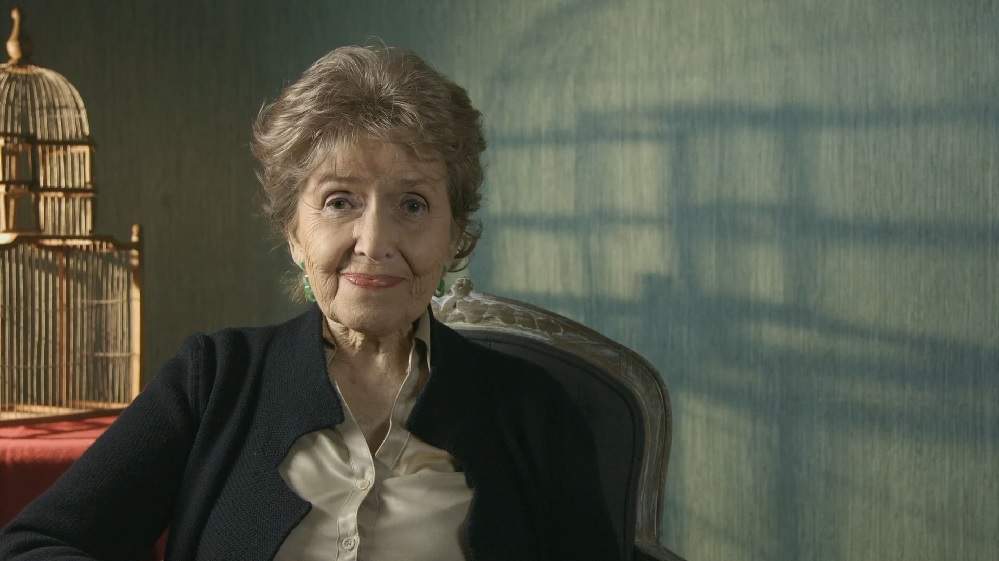 Luba Estes, aged 10 in 1941, gives a unique perspective on the occupation and imprisonment of her father. (The Fence-docu-drama-Tortuga Films)

Q- What prompted you to make this film?

Feeling that the entire story wasn’t being told. I interview trauma survivors and have worked with veterans who have had PTSD for many years. There was something in this story that wasn’t completely clear to me. You have to remember that for almost 2 years after the Battle of Hong Kong the Canadians “disappeared”. There are stories of Canadian wives who remarried, thinking that their husbands were dead. This is a history that has thousands of archives whose classification was not prioritized by the government of Japan. So the Allied POWs disappeared for two years because the rules of the Geneva Convention allowing letters etc. were never respected. The story disappears through lack of post-war archives (unlike the Holocaust) and then the story is re-written in history books…. I wanted to tell the truth. In history, that is never a black and white situation so I settled for the grey …between the fence lines.

Q- War documentaries usually focus on veterans, but one of the principle people in this film is a civilian describing her experience as a  young person living through the experience, how did that come about?

This aspect does make the film unique. The perspective of Luba Estes, a White Russian who is stateless and so lives inside Hong Kong during the occupation, crosses ‘the fence’ so to speak between troops and civilians. It started because I had found a copy of the 16 drawings made by her father, Alexander Skvorsov, who hid those drawings featured in the film, under his bed for four years in Sham Shui Po Prison who risked his life in the process. After that, I called every Luba Estes in Florida.  I found that his daughter was alive, and that is how I met Luba. This is the first time she tells her full story on camera. 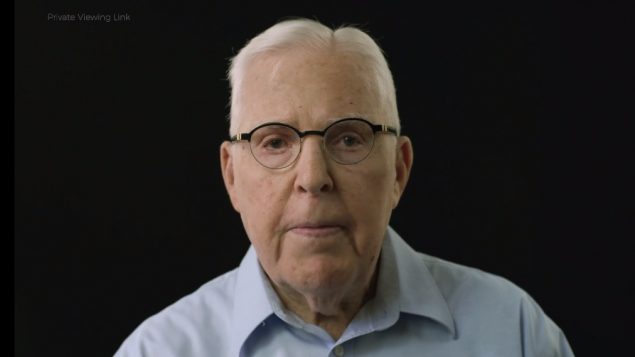 George MacDonnell. “they largely gave us food that they themselves wouldn’t eat ( The Fence)

Q– Some of the descriptions of atrocities are truly quite horrific, and though I know a great deal about the battle of Hong Kong, even I had not heard about some of them nor of cannibalism. How was it for you to hear some of these truly grotesque acts?

I make war films. So the actions of wartime tend to be a part of that reality. I do consult a war crimes trauma therapist as I make these films: self-care is very important when dealing with first-hand trauma interviews. The stories in this film are all told for the first time and that is considered front-line work. 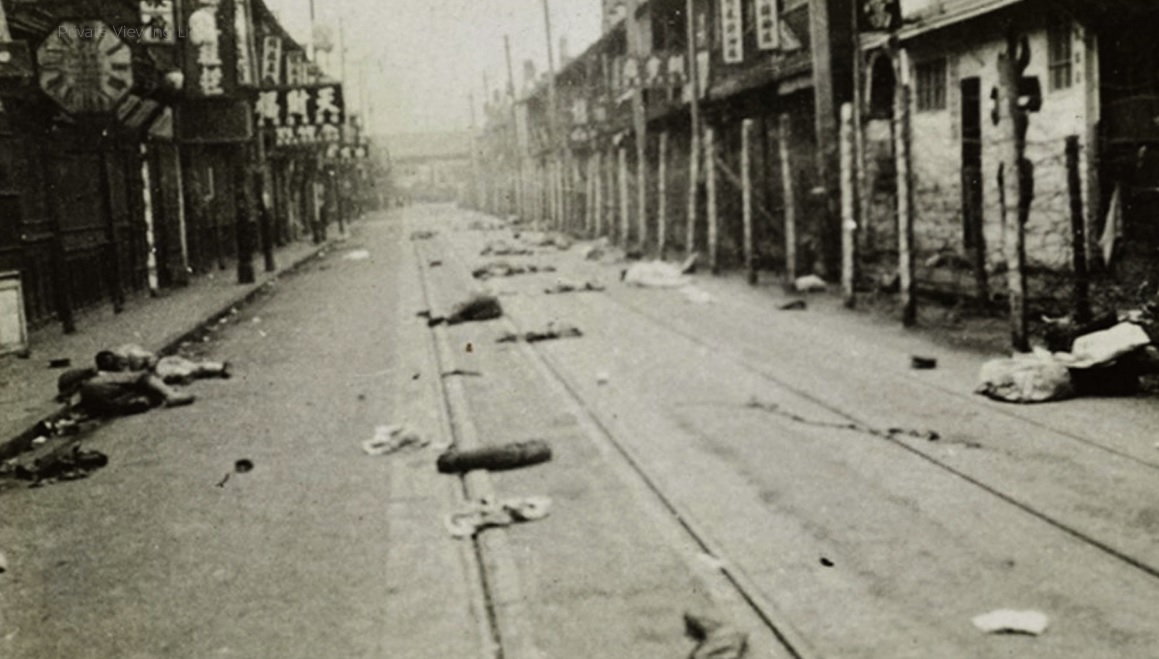 Bodies and detritus litter the street ( The Fence)

But with regard to the “grotesque” nature of cannibalism, more shocking to me was the concept of a woman who is so starved that she has no more milk in her own breasts and leaves her baby in the street to die.

Cannibalism has been repeated in history, across a variety of cultures and under variety of circumstances. We have to remember that in this case the cannibalism was not endo-cannibalism or exo-cannibalism but in fact starvation cannibalism. The primary reason that the cannibalism archive, which has never been seen before this film, is mentioned, is to show that it was in fact a document sent to the head office in Tokyo. How could the Japanese charge the Chinese population for acts their own policies inflicted – and in the very same Asia-Pacific war “exempt” one’s own troops from such acts? At the end of the day, the suffering and trauma that came from those decisions, taken under great duress, traumatized generations in both Japan and in the Allied forces. 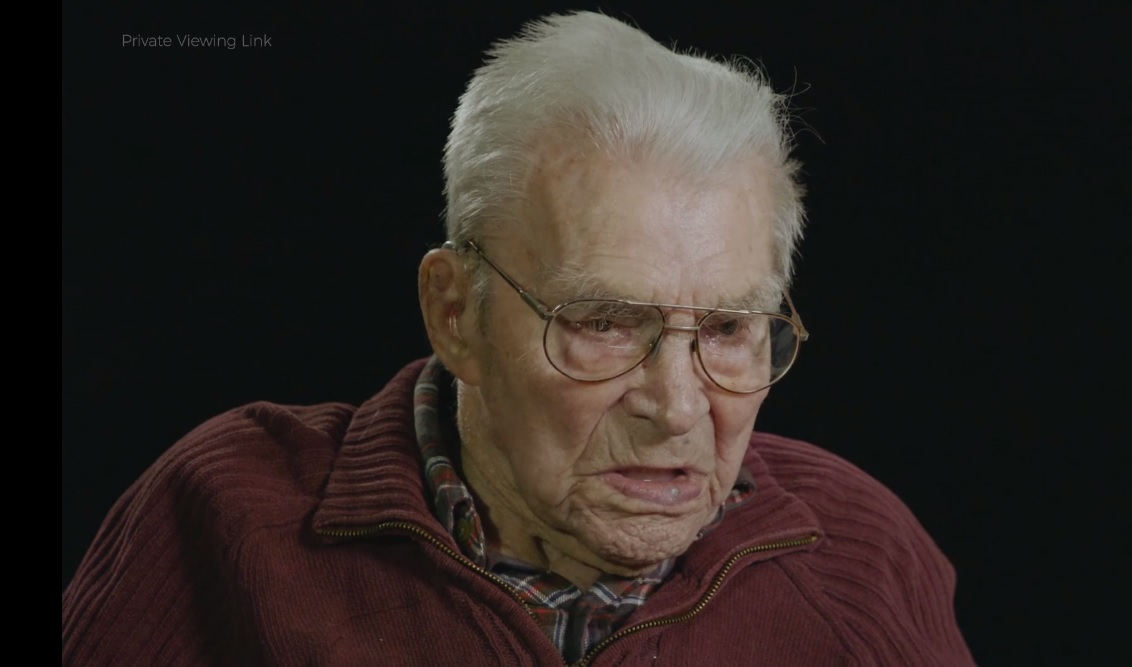 George Peterson, 1Bn Winnipeg Grenadiers witnessed a truly horrific killing of a pregnant woman outside the gate,”Forgive and forget? Never… no way!” (The Fence)

Q- Do you think many people even know of this battle, the imprisonments of  Canadian soldiers, foreign citizens, and the years of occupation?

No, I don’t think they do. I think we tend to focus on D-day and Dieppe.  I think that human nature likes to tell the stories of the victors, not of an 18-day battle which was the first loss for Canada in WW2 and our only involvement in the Asia-Pacific war. When they came home, the veterans did not receive compensation because they were “in prisoner of war camps and didn’t really do anything for the war effort”. It took years for our own government to acknowledge their suffering. Let’s not paint ourselves as holier-than-thou. War is a political, chaotic affair – and really it’s which side of the fence you are on that ends up being the history you tell.

Q- What do you want people to get from this film?

That suffering is sufficient reason for acknowledgment. That apology is not essential in my mind. But acknowledgment is. “Sorry for what you suffered, but sorry for what we suffered also”, says Dr. Yuki Tanaka in the film. I see the people of Japan suffering today from the policy of revisionist history propagated by the Ministry of Education and Science. I have yet to see a society or a culture that has profoundly grown and healed from a quicksand of lies. 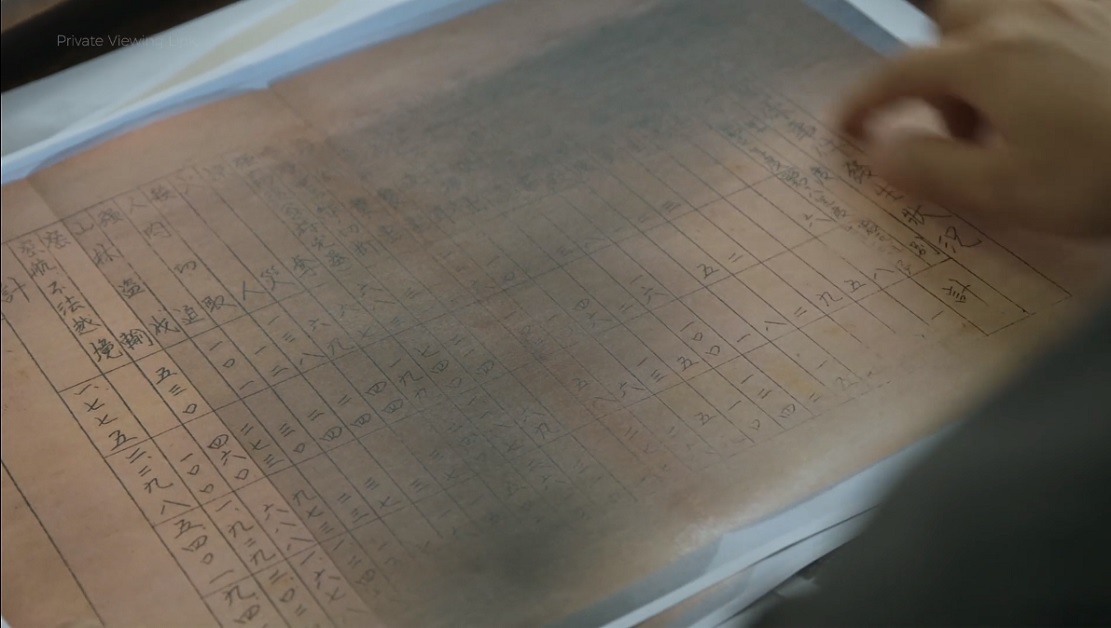 A rare discovery, a Japanese record documenting cases of cannabalism ( The Fence)

Yet, was the silence inflicted upon Japan’s veterans worse than the silence we inflicted upon our own? Quoting George Peterson, one of our veterans: “No one believed me when I came home, so I just stopped telling the stories”. It was not until 1998 that Canadian veterans received $24,000 for their 4 years work as slave labour – and at that point the acknowledgment came only from the Canadian government.

I suppose I want us to acknowledge who we are – what history we record. Or choose to write in our books. And, In the end, I ask that we do not judge those until we have walked a day in the shoes of their suffering and in the decisions they had to make. Unless we were there, we cannot know how we would have acted in the face of watching our children starve.