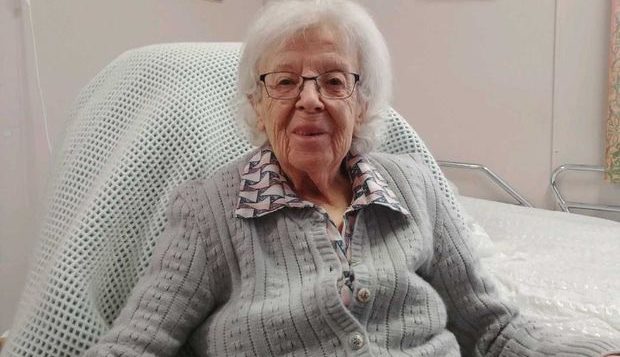 Gisèle Lévesque, 89, seen in an undated photo, became the first Canadian to receive a vaccination against COVID-19, at a long-term care home in Quebec City on Monday. (THE CANADIAN PRESS/HO-National Capital Integrated University Centre of Health and Social Services)

Canada’s COVID-19 vaccination campaign is up and running

The largest mass vaccination campaign in Canada’s history is underway following Health Canada’s approval last week of the use of the COVID-19 vaccine from Pfizer and BioNTech.

About 30,000 doses are expected in the coming days and shortly before noon today, officials in Quebec said 89-year-old Gisèle Lévesque, a resident of a long-term home in Quebec, had received her shot--making her the first in Canada to be vaccinated.

Shortly after noon, an Ontario long-term care worker, Anita Quidangen, was announced as the first person in that province to receive a vaccination–making her the first in Canada to receive the shot. 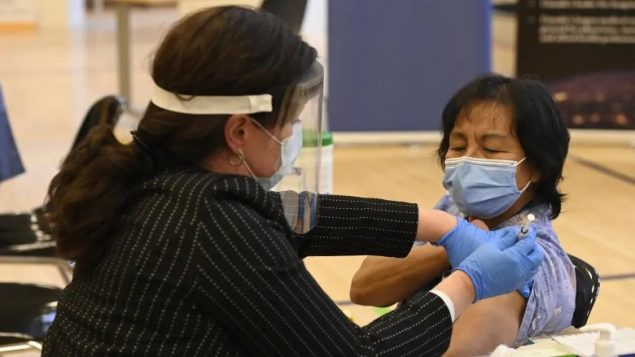 However, the Ontario officials were apparently unaware that Mme. Levesque had received her shot a little while earlier.

Other provinces plan to focus more at the start on health-care workers before concentrating on the residents of long-term care homes.

Because provinces and territories in Canada administer their individual health care systems, the three northern territories–the Northwest Territories, Nunavut and Yukon–decided to wait for the vaccine from Moderna because of the high temperatures required to store the Pfizer-BioNTech vaccine. 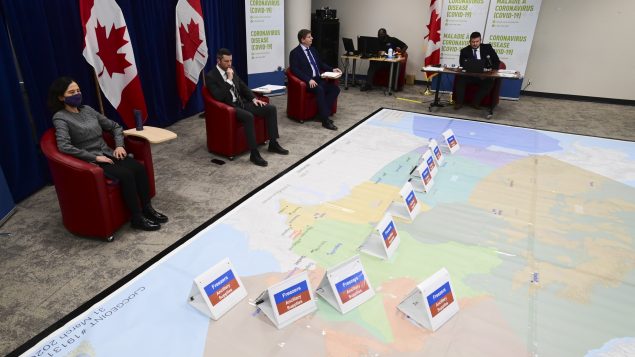 Chief Public Health Officer Dr. Theresa Tam, left, and Maj.-Gen. Dany Fortin, second from left, join other members of the vaccine distribution task force as the Canadian Armed Forces and the Public Health Agency of Canada (PHAC) hold a rehearsal of concept drill for the vaccine rollout at the PHAC headquarters in Ottawa on Friday. (THE CANADIAN PRESS/Sean Kilpatrick)

The pandemic has killed more than 13,000 people in Canada and infected another 450,000, with Quebec and Ontario suffering the highest number of losses.

The announcement came after Oxfam said last week that nine out of 10 people in many poor countries will not get immunized next year because of a lack of vaccines.

Canada currently has enough vaccines secured to protect a population four times its size–the most of any country in the world. 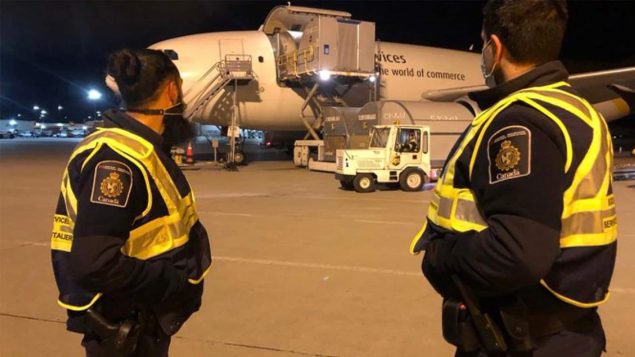 Canada received its first batches of the Pfizer-BioNTech COVID-19 vaccine on Sunday ahead of the planned first stage of immunizations this week. (CBC News)

The first doses of the vaccine arrived in Canada on Sunday and, according to Maj.-Gen. Dany Fortin, the man in charge of the logistics of the distribution, all systems are on go.

Fortin told the CBC’s Rosemary Barton provinces have confirmed they are ready at the 14 locations where the vaccine–which must be stored at temperatures below -70C.

“We’ve really walked this walk all together in the last several days,” Fortin told Barton, noting that everyone has been closely collaborating.