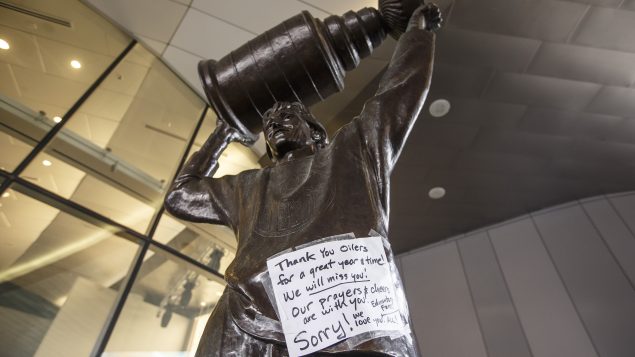 A note thanking the Edmonton Oilers is seen on the Wayne Gretzky statue outside Rogers Place in Edmonton, Alta., on March 12 after the National Hockey League suspended the 2019-20 season due to the COVID-19 pandemic. Gretzky is hoisting a replica of the Stanley Cup, the NHL's championship trophy, a dream a great number of Canadians--young and old--have shared. (THE CANADIAN PRESS/Jason Franson)

Gretzky memorabilia: an icon’s totems are recovered in haste

The game of hockey–it is more than safe to conclude–provides its fair share of Canada’s totems.

The remains of a roll of tape, a broken stick, a battered glove, tossed by an older player–be it at an NHL practice or after a beer league game–is more than capable of lighting up a Canadian kid’s heart. 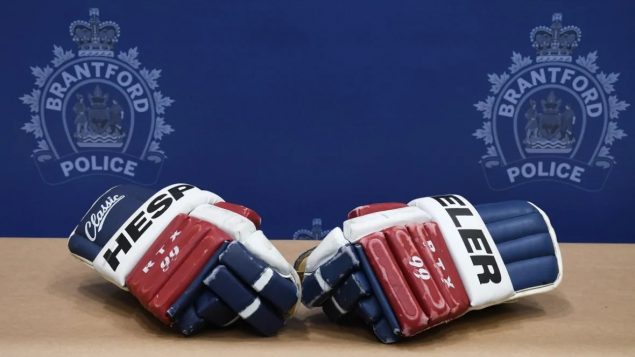 A set of Wayne Gretzky’s gloves were revovered following an investigation by three levels of Canadian police. (Brantford Police Service)

There is, of course–sometimes–another side to those emotions: a thriving memorabilia business–where hockey cards and hockey sticks fetch a very pretty penny at auction or at a store that specializes in such things.

How pretty is that penny? 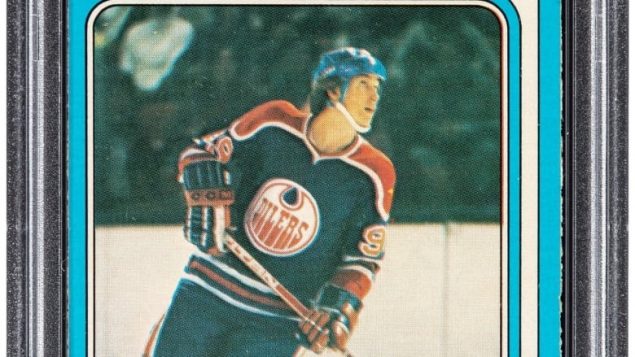 Maybe a shot at that kind of money is what prompted someone to steal an estimated $635,000 Cdn. worth of memorabilia from the home of Gretzky’s father, Walter, in Brantford, Ontario in August.

Did any member of the three levels of police–local, provincial, federal–have a memory of getting a piece of of equipment tossed their way when they were a kid?

It sure didn’t take the cops long. 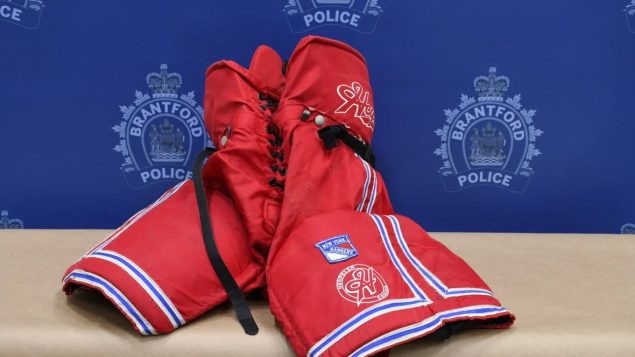 Game-worn gloves and hockey pants were among the items that were stolen, according to police. (Brantford Police Service)

Investigators said they quickly found that several of the missing items had likely been sold to collectors across Canada.

Search warrants were executed at five homes in Alberta and Ontario, and on Dec. 8 the memorabilia was recovered.

Two people have been arrested.

“On behalf of our family, I would like to thank the Brantford Police Service, the Ontario Provincial Police, and the Royal Canadian Mounted Police for everything they have done regarding this investigation,” read a statement attributed to Glen Gretzky, a brother of Wayne, speaking as any self-respecting Canadian hockey player would.

“I would like to sincerely thank every member of the team; the professionalism, dedication and support they have shown has been greatly appreciated.”