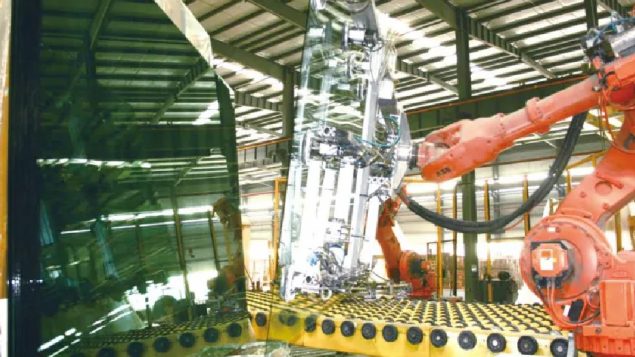 Xinyi Glass Canada wants to create a $400 million float glass plant in Stratford, but many locals are opposed citing a variety of reasons including 'national security' ( submitted-via CBC)

The small central Ontario city of Stratford Ontario, is widely known for its Shakespearean theatre and annual festival. As such there is also a vibrant arts community that has grown there over the decades in the otherwise mostly agricultural region.

However it’s now becoming the site of an international battle.

A multi-national Chinese firm, Xinyi Canada Glass Limited wants to build a huge ‘float glass’ plant on prime agricultural land on the edge of the city. A growing group of residents is greatly upset at how approval has been granted for the Chinese factory. They claim there has been a lack of transparency by town council about the deal, the costs, and a very specific Ontario ministerial rezoning order (MZO) to allow the plant and which overrides public review. 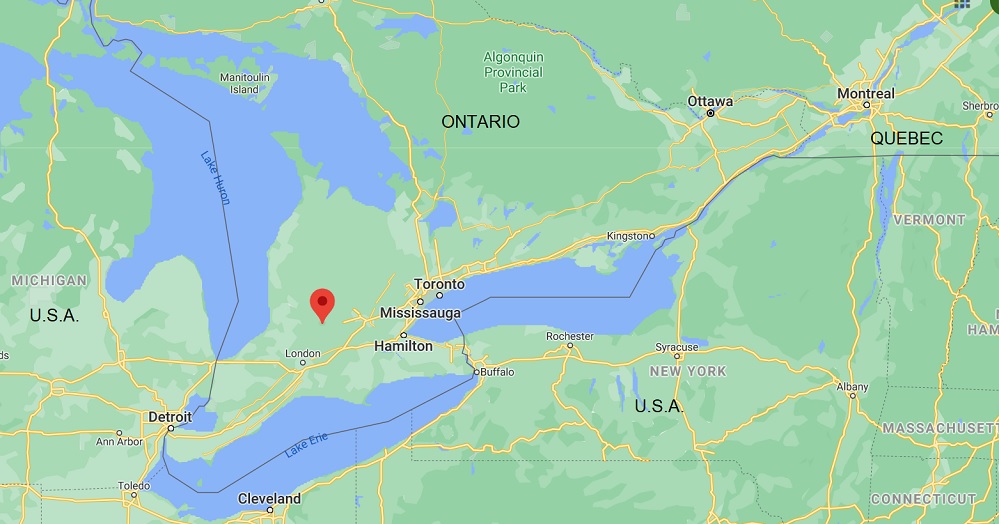 The small city of Stratford is widely known for its theatre and arts community and is located in a mostly agricultural region of the province. ( Google maps)

City council and Xinyi representatives have stated that the proposed plant has, and will, meet all environmental and other laws and requirements.

A group called ‘Get Concerned Stratford’ has been seeking more information about the plant and approval process and has been organizing opposition to the proposed factory.

Earlier this month they submitted a letter of formal complaint to a third party investigator via the city clerk’s office about a lack of transparency and public consultation related to the MZO which cleared the way for approvals for the plant.

A related group and website of opposition to the plant is called ‘Wise Communities Stratford’. 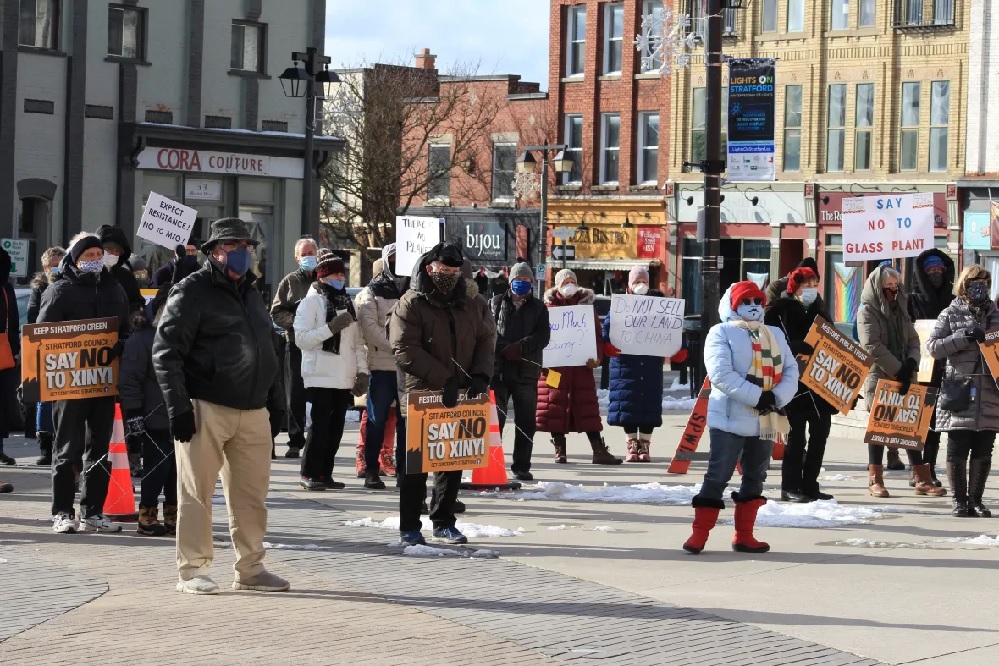 Observing COVID rules for social distancing, protesters in Stratford chant slogans and wave placards in opposition to a proposed Chinese-owned glass factory that would be built on prime farmland on the city’s boundary. The protest has become a fixture in the city’s market square each Monday. (Mark MacCauley/Wise Communities)

Calling the approval process undemocratic, they have also raised concerns about bringing in Chinese workers and researchers.  In addition to their other concerns, Wise Communities Stratford have now added the additional concern of Canada’s national security.

In an open letter to Navdeep Bains, federal Minister of Innovation, Science and Industry, members of the Wise Communities Stratford group opposed to the Chinese plant alleges it poses national security questions.

They claim the ‘private’ plant has close ties to the Beijing government and communist party through a web of subsidiaries and holding companies registered in the tax haven Cayman Islands and Virgin Islands. They allege the various listed owners and management have overt ties to the communist regime. 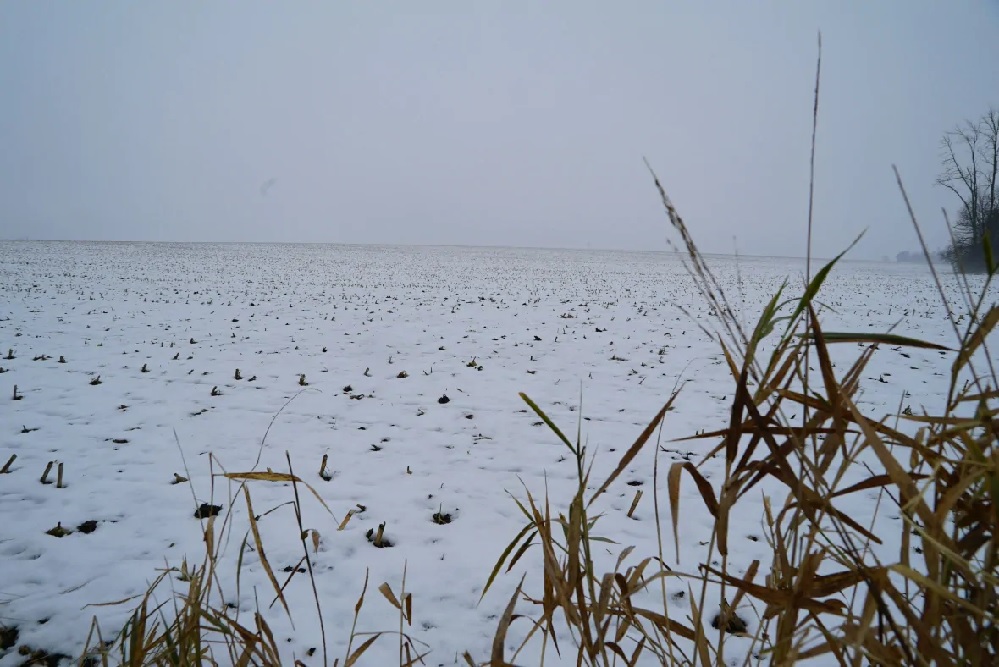 This plot of land on the edge of the city is currently listed as prime Class 1 farmland, and is where a 1-million-square-foot glass plant has been proposed. It was rezoned specifically to allow a “float glass” facility under a provincial ministerial order which overrides the need for public consultation. (Colin Butler/CBC News)

They also claim that Xinyi could supplant current supply sources for float glass through possible predatory pricing to effectively create a monopoly across Canada. In the open letter they write that, “Float glass is a “critical good” and allowing a foreign owned entity to become the exclusive supplier could negatively impact the security of Canada’s critical infrastructure and impact the supply of critical goods to Canadians”.

The letter also states that the several Chinese scientists who will operate at the site will do so from a separate building which they say seems inconsistent with the stated purpose of research and development.

They say Xinyi has no similar facilities at any of its other locations.

The opponents write, “Stratford is a wireless city, and a centre for research and development related to autonomous vehicles. The open network could be used for surveillance of Chinese nationals, or other persons, living in Stratford. Protection of Canadian-based research on autonomous vehicles from unauthorized persons is clearly a national security matter”.

Also citing environmental concerns and lack of consultation with local First Nations downstream from the proposed facility, the letter concludes by asking that a full review of the $400 million dollar factory be conducted under the Investment Canada Act.

This allows the federal government to intervene where there might be concern over matters of economic or other security issues.