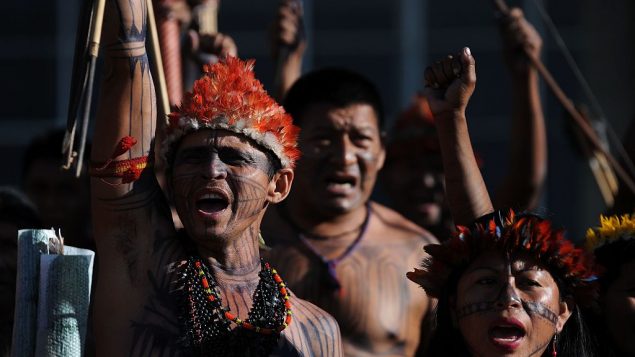 Indigenous activists of the Sawre Muybu Munduruku tribe, supported by Greenpeace, protest in front of the Palace of Justice in Brasilia, on Nov. 29, 2016 demanding the government to officially demarcate their land and to definitively cancel the construction of a hydroelectric plant on the Tapajos River, in the heart of the Amazon. (Andressa Anholete/AFP via Getty Images)

As the world gears up to transition its energy sources from fossil fuels to renewable energy to curb greenhouse gas emissions, new research by Canadian and European scientists warns that the “decarbonization of the economy is by no means inherently environmentally innocuous or socially inclusive.”

A recently published research paper authored by scientists at McGill University in Montreal and the Institute of Environmental Science and Technology of the Universitat Autònoma de Barcelona (ICTA-UAB) says green energy mega projects are often as socially and environmentally disruptive as large scale extractive industry projects.

The research, which has analyzed protests over 649 energy projects, cautions that while renewable energy projects are often portrayed as being environmentally sustainable, they often disproportionately impact vulnerable groups such as rural communities and Indigenous peoples.

Amongst the so-called low carbon energy projects, hydropower was found to have the highest number of conflicts with concerns over social and environmental damages, according to the paper published in the journal Environmental Research Letters.

The study, which analysed data from the Global Atlas of Environmental Justice (EJAtlas), an online database by ICTA-UAB that systematizes over 3,000 ecological conflicts, found that repression and violence against protesters and land defenders was rife in almost all activities, with 10 per cent of all cases analysed involving assassination of activists.

Violence was particularly common in relation to hydropower, biomass, pipelines and coal extraction, the study found. The study finds that among “clean energy” projects, hydropower is the most socially and environmentally damaging, leading to mass displacement and high rates of violence.

Out of the 160 cases of hydropower plants from 43 countries studied, almost 85 per cent of the cases are either high or medium intensity, and more than half adversely affected Indigenous communities. 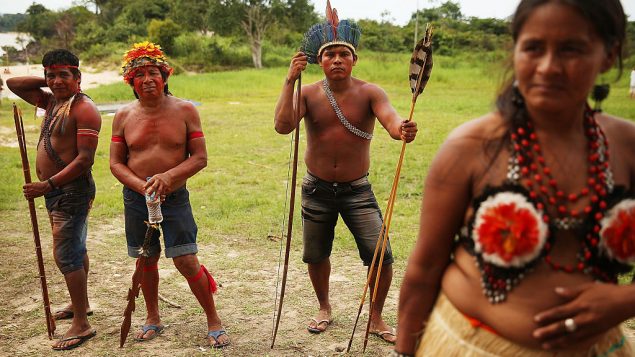 Members of the Munduruku Indigenous tribe gather along the Tapajos River during a “Caravan of Resistance” protest by Indigenous groups and supporters who oppose plans to construct a hydroelectric dam on the Tapajos River in the Amazon rainforest on Nov. 27, 2014 in Sao Luiz do Tapajos, Para State, Brazil. (Mario Tama/Getty Images)

“We’re talking about a huge number of people that are displaced, it’s probably the projects that displace the largest numbers of people and, of course, that leads to communities resisting their displacement and dispossession,” said Leah Temper, an ecological economist and a political ecologist at McGill University, who co-authored the international study.

“And these are also extremely important strategic projects, so there is a lot of coersion to push these projects through, including hydro power projects.”

Wind, solar and other renewables were the least conflictive and entailed lower levels of repression than other projects.

“The study shows that the switch from fossil fuels to green energy is not inherently socially and environmentally benign and demonstrates how communities are standing up to demand a say in energy systems that work for them,” said Temper.

“These results call for action to ensure that the costs of decarbonization of our energy system do not fall on the most vulnerable members of our society.”

However, the study also points to the effectiveness of social protest in stopping and modifying energy projects, finding that over a quarter of projects facing social resistance turn out to be either cancelled, suspended, or delayed.

The study finds that conflicts and collective action are driven by multiple concerns through which community mobilization seeks to reshape the energy regime and its impacts, including claims for localization, democratic participation, shorter energy chains, anti-racism, climate-justice-focused governance, and Indigenous leadership.

“The study urges climate and energy policymakers to pay closer attention to the demands of collective movements to meaningfully address climate change and to move towards a truly just transition,” Temper said.

“Both green and brown energy projects can lead to ecological devastation and social exclusion if local communities and ecosystems rights continue to be trampled upon,” Kosoy, one of the co-authors of the study, said in a statement.