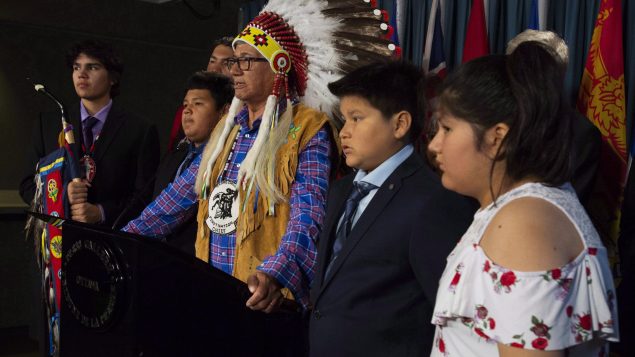 Kashechewan First Nation Chief Leo Friday stands between students Jared Wesley, Curtis Koostachin, Arthur Koosee and Priscilla Wesley as he speaks about school conditions on his reserve during a news conference on Parliament Hill in Ottawa, Monday Sept. 17, 2018. A recent study by The Conference Board of Canada, in partnership with the Future Skills Centre, has found that many Indigenous students leave high school inadequately prepared to continue post-secondary studies in science, technology, math and engineering. (Adrian Wyld/THE CANADIAN PRESS)

Many high schools in northern Canada and remote Indigenous communities need to do a better job of teaching science and math skills to Indigenous students to prepare them for post-secondary education in science, technology, engineering and mathematics, according to a new study.

Research from The Conference Board of Canada, in partnership with the Future Skills Centre, has found that many Indigenous students leave high school inadequately prepared to continue post-secondary studies in these domains.

The study shows that Indigenous students from under-resourced rural and remote schools are less likely to be prepared for post-secondary math and science courses than urban students, said Jane Cooper, Senior Research Associate at The Conference Board of Canada.

“Unfortunately, Indigenous learners are still constrained by the lack of broader education system reforms in K–12 schools,” Cooper said in a statement.

According to the latest national census, Indigenous people make up over four per cent of adults in Canada but less than two per cent of people working in science, technology, engineering, and mathematics (STEM) fields.

The study says fixing this problem requires change at all levels of the education system.

In 2015, Universities Canada found that more than 80 per cent of Canadian universities were trying to address the transition to post-secondary education for Indigenous students.

Canadian colleges and universities have offered targeted services to Indigenous students to better retain them in science, math, technology and engineering programs.

These include financial aid, financial guidance, social and cultural activities, and designated spaces.

These college and university programs have gone beyond helping students to graduate, to change how post-secondary institutions admit students, assess them, teach in the classroom, and deliver programs.

“Progress is being made and needs to continue,” says Pedro Barata, executive director of the Future Skills Centre.

Access programs are not only helping Indigenous students graduate in science and technology subjects, but they are also improving the university experience for all students, Barata added.

“However, broader educational reform is necessary if more Indigenous students are going to succeed in the long run,” Barata said.