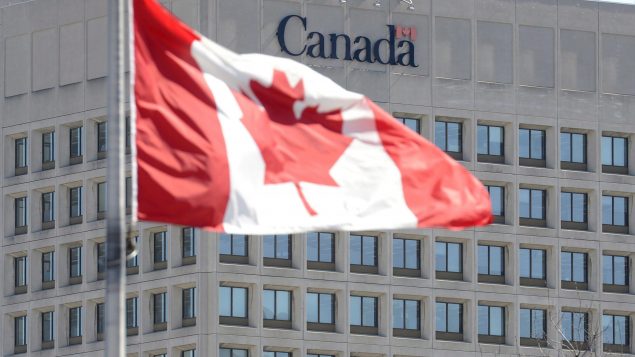 The facade of the headquarters of the Department of National Defence in Ottawa is pictured in 2013. A new report from the department's research arm, Defence Research and Development Canada, lays out a range of political, economic and security challenges that could emerge — or become more prominent — depending on how long the COVID-19 pandemic remains. (THE CANADIAN PRESS/Adrian Wyld)

New research from Canada’s Department of National Defence serves notice about what could turn out to be far-ranging side effects from the COVID-19 pandemic–side effects that exist well beyond hospitals and ICU units.

It suggests that the longer the pandemic continues, the more likely it is that right-wing extremism will grow–both in Canada and around the world.

The Defence Research and Development Canada report–prepared in October for NATO–suggests the risk of more wars between countries and inside them is also directly related to the pandemic’s duration.

It says that the faster that effective vaccines are rolled out, the faster economies will recover–boosting trust in governments and international institutions such as the United Nations.

But it warns that even if that happens: “We can expect that the adversarial states will remain those already identified as such prior to the pandemic, including China, Iran, North Korea and Russia.”

Canada’s federal government has identified the rise of right-wing extremism and hate as a major threat to the country and a report in June by the U.K.-based Institute for Strategic Dialogue (ISD) think-tank identified more than 6,600 online channels — pages, accounts or groups — where Canadians were involved in spreading white supremacist, mysogynistic or other radical views.

In September, Canada’s army commander, Lt.-Gen. Wayne Eyre, said he was taking aim at far-right infiltration of the country’s military.

“The pandemic has acted to accelerate existing global trends so it follows that the longer and more severely it plays out, the greater the impact will be on international security,” the report said.

“Military planners would be wise to keep this metric in mind as they consider the challenges that their nations and the NATO alliance faces.”