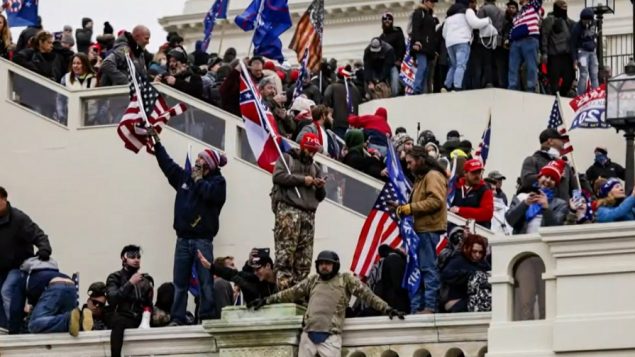 A huge mob of Trump supporters stormed the U.S.. Capitol Building in Washington last Wednesday, resulting in a total of five deaths. Proud Boys members were seen among the mob (via CBC News)

Following the mobbing of the U.S Capitol building by supporters of outgoing U.S. President Trump, the office of Canada’s Minister of Public Safety has announced it will be looking into the activities of the Proud Boys as a potential terrorist group.  Typically listed as a white supremacist and misogynistic far-rightist group, Proud Boys adherents were seen among the crowd that stormed the Capitol in Washington last Wednesday.

Mary Liz Power is a spokesperson for Public Safety Minister Bill Blair. Quoted by the Canadian Press, she named the Proud Boys as being among ‘ideologically motivated” right wing and white supremacist extremist groups the government is monitoring. 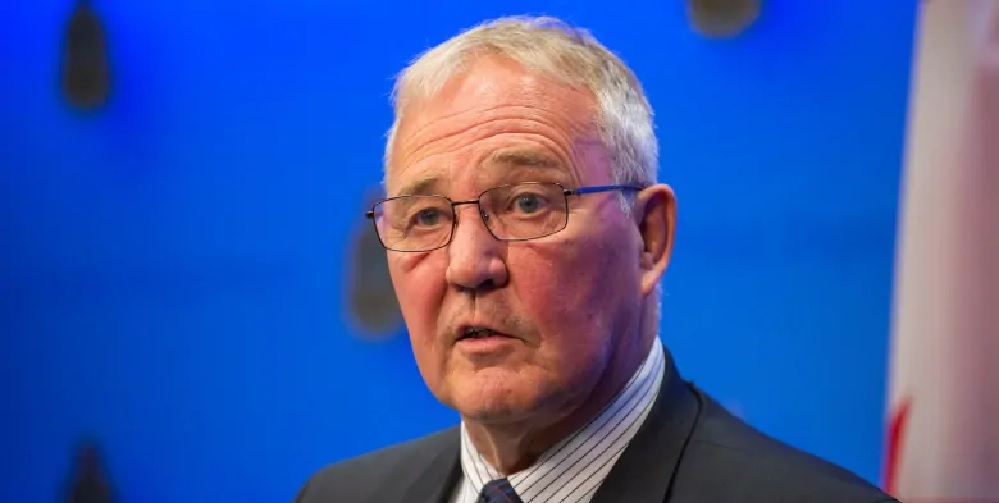 The office of Public Safety Minister Bill Blair said an investigation is underway to determine if the Proud Boys should be declared a terrorist group. (Ben Nelms-CBC)

In an email to the Canadian Press she said, “Our national security and law enforcement agencies are very actively engaged in monitoring the activities of these groups, and gathering the evidence required to support a determination of listing as a terrorist organization”.

Founded by a Canadian in 2016, the group has gained more adherents in the U.S. and was banned by Facebook in 2018 for violating their hate speech policies and is now also banned on Twitter, Instagram, and YouTube

The Proud Boys came to national attention in Canada after five members, all in the Canadian military, briefly showed up at a Mi’kmaw-led protest at the statue of  Edward Cornwallis in a Halifax park in July, 2017. The protesters accuse the British military officer who founded the city, of having promoted genocide against the indigenous population.

The domestic security agency, the Canadian Security and Intelligence Service (CSIS), dropped its ongoing investigation of rightist groups in Canada in 2016. Such investigations were reopened in 2018 after the deadly shooting at a Quebec City mosque by a man believed to be influenced by far right websites.

Power noted that a designation as a terrorist organization makes criminal investigations and prosecutions easier and can result in financial institutions freezing assets while also making it a crime to have dealings with any such groups or their assets.

There are currently some 60 groups on the Canadian terrorism list including Al Qaida, the Palestine Liberation Front, the Islamic State, and Boko Haram, The first listing of  far right neo-Nazi groups Blood and Honour/Combat 18 came in 2019. 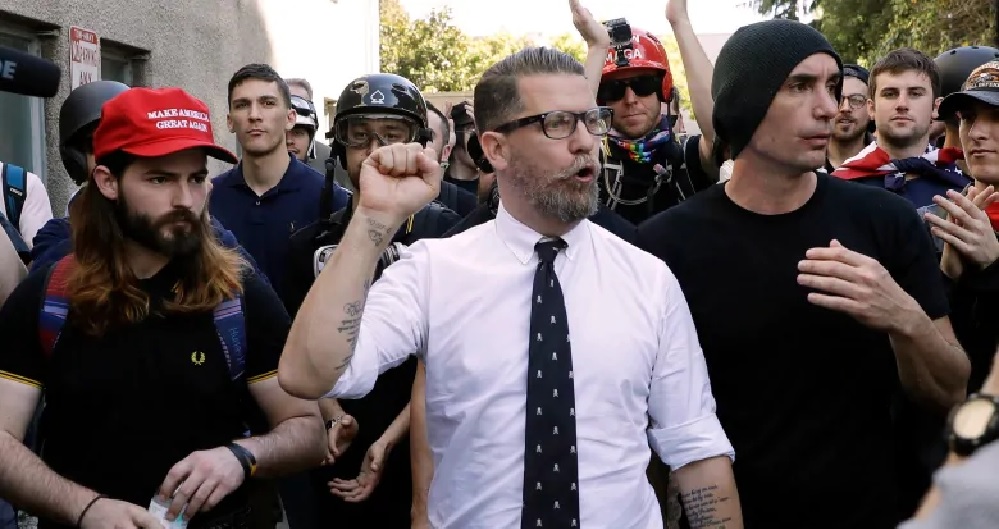 The Proud Boys was founded in the U.S by Canadian Gavin McInnes (centre) in 2016. He left the group in 2018. He is shown here in Berkeley California surrounded by supporters in April 2017 following a speech. He has been banned from leading social media platforms over issues of hate speech (Marcio Jose Sanchez-The Associated Press)

On the heels of the Washington attack, the opposition New Democratic Party leader Jagmeet Singh has started a petition calling on the federal government to make the terrorist declaration and ban the Proud Boys. The leader of the official opposition Conservative Party, Erin O’Toole  in a statement to Global News said the Conservative Party  has consistently stood against extremism “wherever it is found and whatever its motivation”, adding the party, “supports the listing of various white supremacist groups as terrorist organizations”.

Bill Blair’s office in announcing their increased scrutiny of the Proud Boys and others, did not however indicate when or if, the Proud Boys would be added to the list of terrorist organisations. 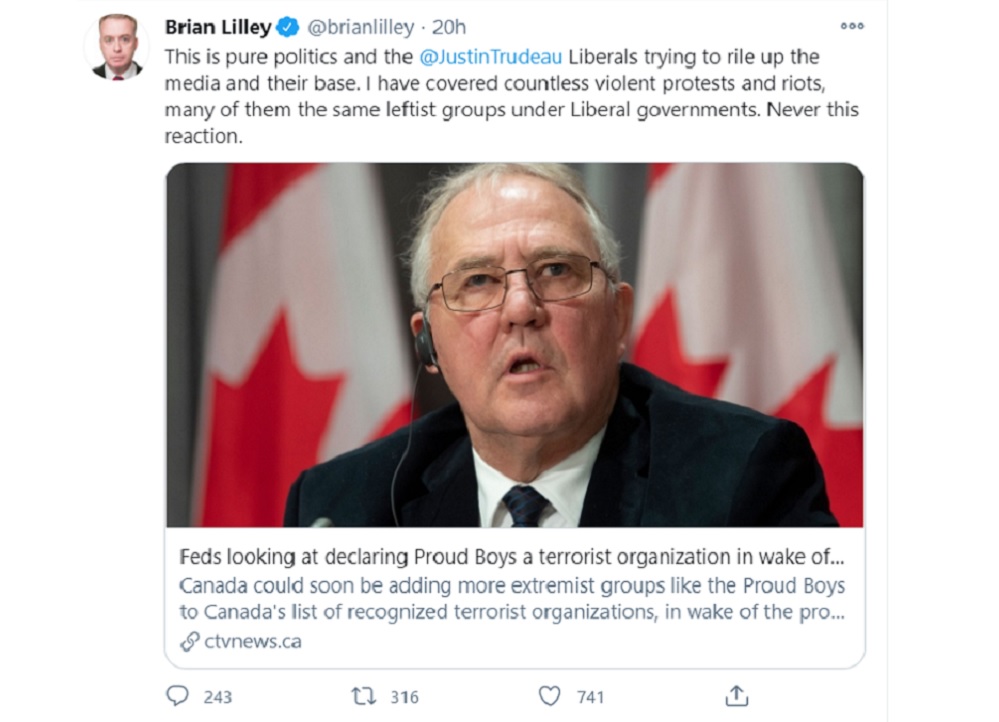 Brian Lilley, a well-known journalist for the Toronto Sun newspaper questions the governments motives on the issue ( Twitter)

Leah West is a Carleton University professor and former national security lawyer. Quoted in the Toronto Star she said merely being hateful or using violence is not enough to be listed as a terrorist group under Canadian law.

She told the Star, “There has to be an intent to intimidate a section of the population about their security, or to get the government to do something using violence, serious violence that could threaten someone’s life”. She said that those elements were present in the Capitol building attack but they can’t yet all be pinned directly on the Proud Boys. She also agreed however that Canadian authorities should continue to monitor and continually assess whether such groups meet the criteria to be classed as a terrorist organization.

Amarnath Amarasingam, a Queen’s University researcher on terrorism takes the view that if such groups are violent, xenophobic, and “are actively plotting and preparing for a race war they think is imminent”.  He added that left unchecked they will mobilize to higher levels of violence than what has already been seen.