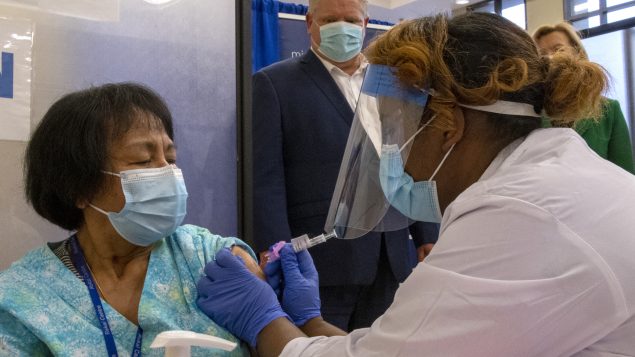 Ontario Premier Doug Ford looks on as the second dose of the Pfizer-BioNTech COVID-19 vaccine in Canada is administered to personal support worker Anita Quidangen by registered nurse Hiwot Arfaso at The Michener Institute in Toronto on Monday, January 4, 2021. The latest survey on vaccinations shows an increase in willingness among Canadians to get the vaccine as soon as it becomes available to them (The Canadian Press/Frank Gunn)

More Canadians ready and willing to get COVID-19 vaccines: survey

The rush to get vaccines to combat COVID-19 has left many wondering about the safety of the medicine and possible side effects.

In past surveys of Canadians there had been a substantial percentage of resistance with some saying they will not get vaccinated at all (roughly 15%), while a larger percentage saying they’ll wait to see if side effects occur in those already vaccinated (roughly 35%), before they themselves get the needle.

Now, with COVID case numbers rising in Canada with new lockdowns and curfews, and with vaccines starting to be distributed, it seems the reluctance to the vaccine is diminishing.

The latest survey from the non-profit Angus Reid Institute shows a marked increase in those eager to be vaccinated. Confidence in the vaccine safety has also increased as early indications have shown very few cases of side effects in those already vaccinated. However the increased willingness for an early vaccination seems to have come mostly from those who previously indicated they would wait a while, with a slight number coming from both the unsure, and refusal segments. 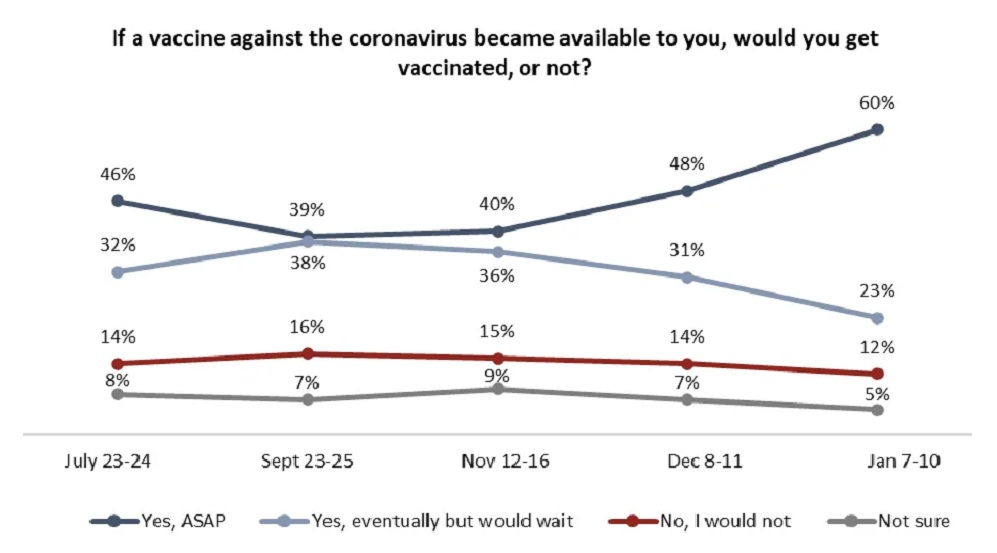 Along with an increase in willingness to get vaccinated as soon as it is available to them, Canadians are becoming slightly more critical of the pace of the vaccine rollout. The majority now feel their chance will still be several months away. About half of those surveyed who responded they want the vaccine say the wait is too long. 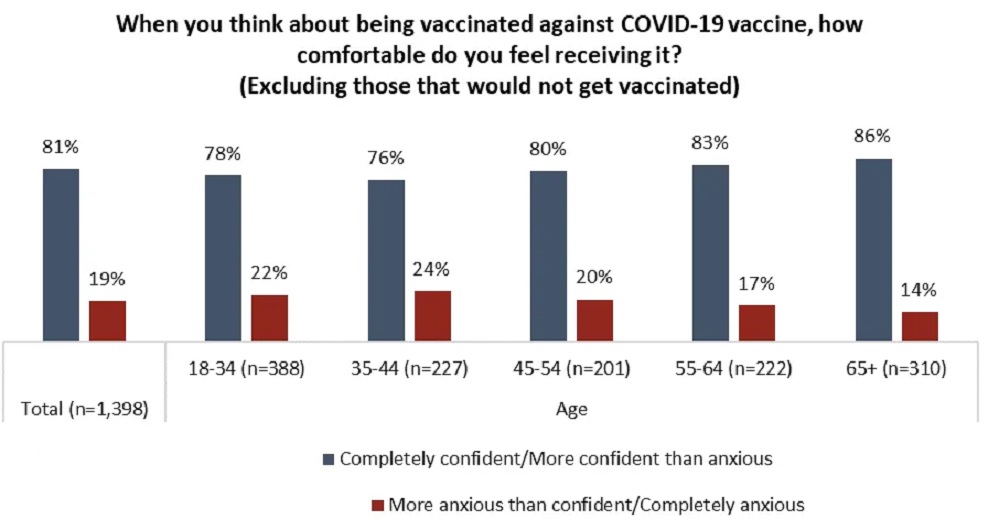 This ‘frustration’ with the pace of vaccination has been slightly exacerbated by news that some of the ‘snowbirds’ (Canadian retirees who spend winters in the warm southern U.S states)  have already received the vaccine from U.S medical distribution. Some reports even have Canadians flying to the U.S to get the vaccine sooner. 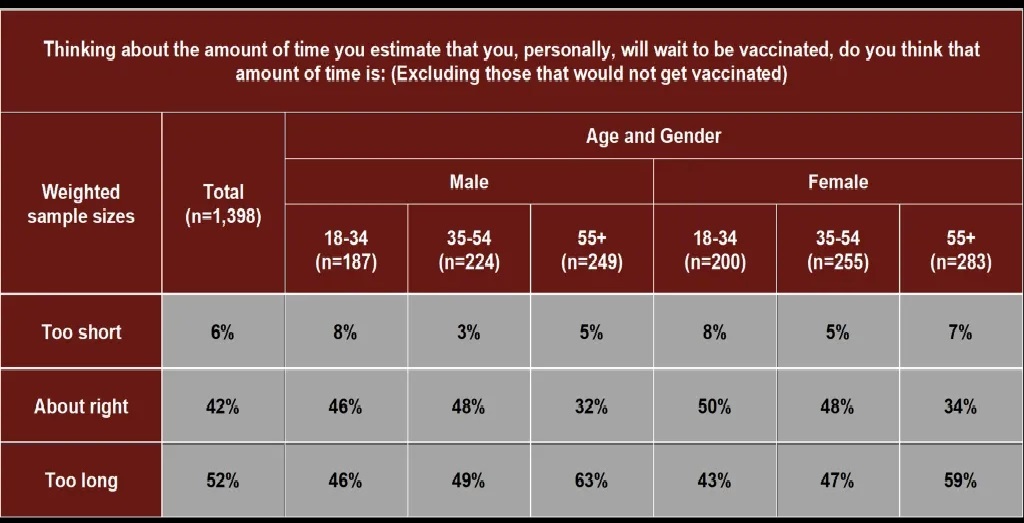 Canada with a population of over 37- million, has contracts for over 400 million doses from various manufacturers. So far Canada is slightly lagging in vaccination rates compared to that of the U.S. or the U.K. and far behind Israel, but ahead of countries like Germany and Spain, and far ahead of France. Canada’s vaccination tracker shows that as of yesterday about 320,000 doses had been administered representing under 60 per cent of the vaccines already delivered to the provinces. According to the website this represents 0.8 per cent of the population having received at least one dose of the two dose vaccines. 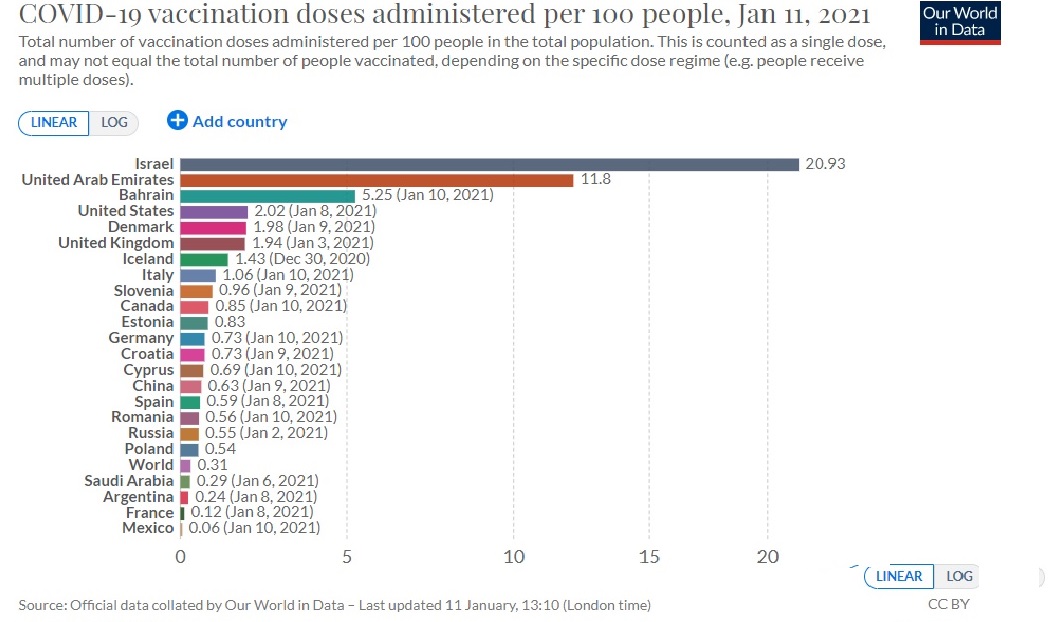 The Angus Reid survey also found that the approval of Prime Minister Justin Trudeau’s handling of the virus rollout and the pandemic has decreased markedly from a high of 62 per cent in April saying he was doing a good job down to the 50 per cent in this just released survey.