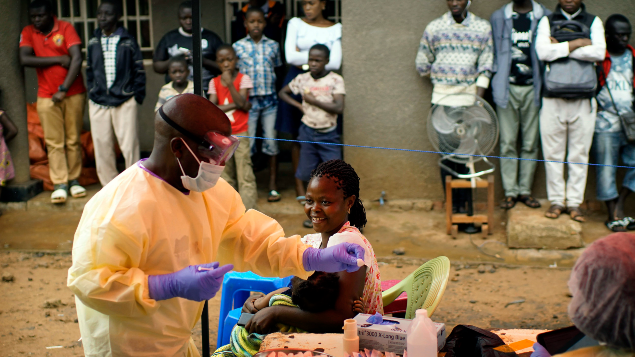 Nurses vaccinated people in the Democratic Republic of Congo in July 2019 after the World Health Organization declared an Ebola outbreak there to be an international emergency. More than 1,600 people died. (Jerome Delay/AP Photo)

While world attention focuses on COVID-19, the World Health Organization (WHO) is preparing for possible future outbreaks of another frightening disease–Ebola. WHO and humanitarian partners will establish a global stockpile of vaccines to protect against this severe and often fatal disease.

The Ebola virus was first discovered in 1976 in Africa. It can cause hemorrhagic fevers marked by severe bleeding, organ failure, and often death. It spreads through contact with bodily fluids or unclean items such as needles. It originally transmitted from animals to humans.

Sporadic outbreaks have occurred in Africa prompting organizations like Medecins Sans Frontieres and the International Federation of the Red Cross (IFRC) to set up emergency treatment centres and education programs to try to contain epidemics. Thousands of people have died from the disease. A 2019 outbreak of Ebola in the Democratic Republic of Congo was declared an international emergency. 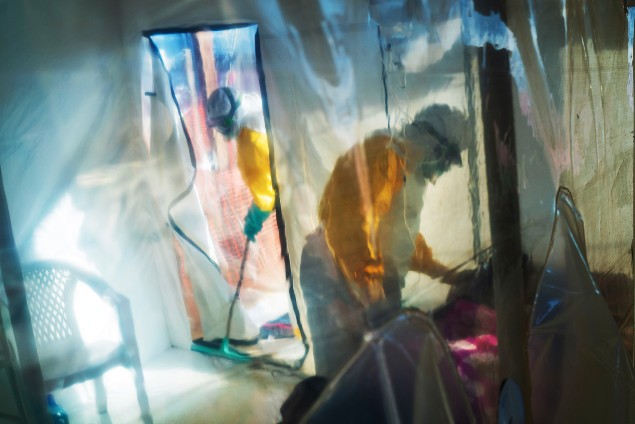 Health workers tending to Ebola patients must wear full protection and work in special isolation tents such as this one in Beni Democratic Republic of Congo. (Jerome Delay/AP Photo/July 13, 2019)

Canada’s National Microbiology Laboratory began work to develop a vaccine in 2001. The incentive was fear that small outbreaks could spread and turn into a major global epidemic, and there was concern Ebola could become a bioterrorism threat.Canadian scientists developed a vaccine and in October  2014, Canada donated 800 vials to the WHO to use in clinical trials during an ongoing Ebola outbreak in West Africa.

The trials showed the vaccine was effective and so, Canada played a major role in the development of the Ebola vaccine by conducting early research, performing initial clinical trials and providing essential funding.

In a statement, IFRC Secretary General, Jagan Chapagain recalled the devastating impact of Ebola on communities in West and Central Africa, and added “through each outbreak, our volunteers have risked their lives to save lives. With this stockpile, it is my hope that the impact of this terrible disease will be dramatically reduced.”