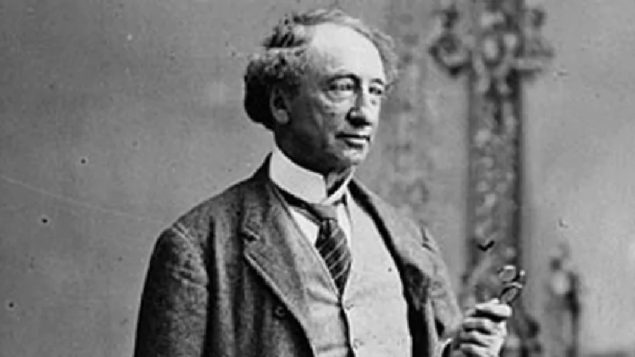 Sir John A. Macdonald, Canada's founder and Prime Minister for 19 years, In recent years many have vilified his reputation. ( Library and Archives Canada)

Experts come to the defence of Canada’s founder

This week (January 11) marked the anniversary of the 1815 birth of Canada’s founder and first Prime Minister, Sir John A. Macdonald

Long revered in Canadian history there are countless institutions across the country named in his honour, and many dozens of statues. 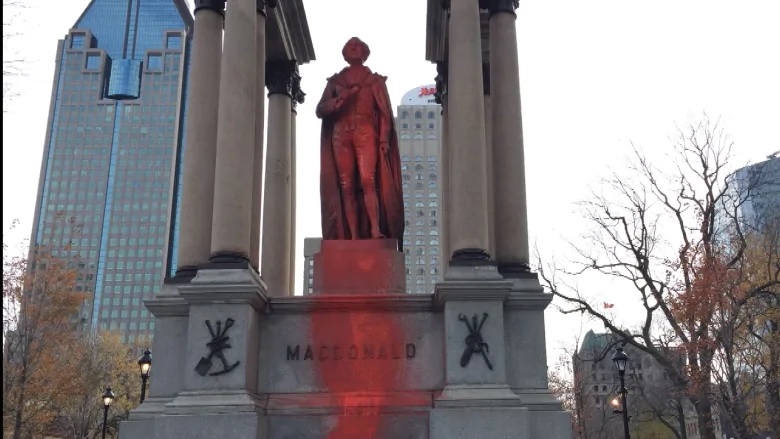 The Sir John A. Macdonald statue in downtown Montreal was vandalized several times before a group of protesters pulled it down and broke it in August.2020. The statue has been stored in a city warehouse ever since.. (Simon Nakonechny/CBC)

In recent years many statues to past historical figures in several countries have been challenged for what and whom they represent. Many have been damaged, many removed. While some applaud these removals, others say the so-called “counter-culture” movement to erase the past is not helpful. They say that it would be better to portray these figures in context with a more balanced view of both their good and bad legacies.

In Canada, the reputation of the country’s founder has come under fire for his promotion of the “residential school system. 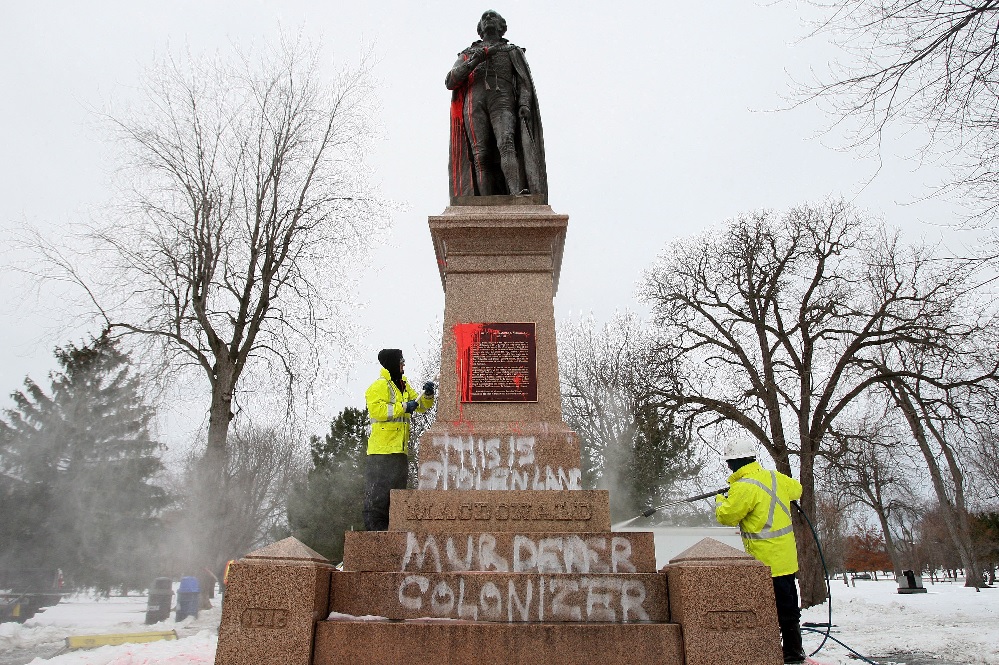 City workers in Kingston, Ontario, where Macdonald practiced law, clean his vandalized statue on Jan 11.2013. Queen’s University in the city has also removed his name from their law school (Lars Hagberg- CP)

In a policy first established under his government, and which continued for well over a hundred years under subsequent governments, young Indigenous children were taken from their families and sent to often distant  boarding schools to theoretically be taught in the ways of ‘modern’ society.

In fact, the idea was to erase Indigenous language and culture and the schools, run by various religious orders, were all too often sites of great emotional, physical, and sexual abuse of the children.  The ripple effect of those abuses can still be felt through today’s generations in Indigenous peoples.

The anniversary has brought this legacy back into discussion. 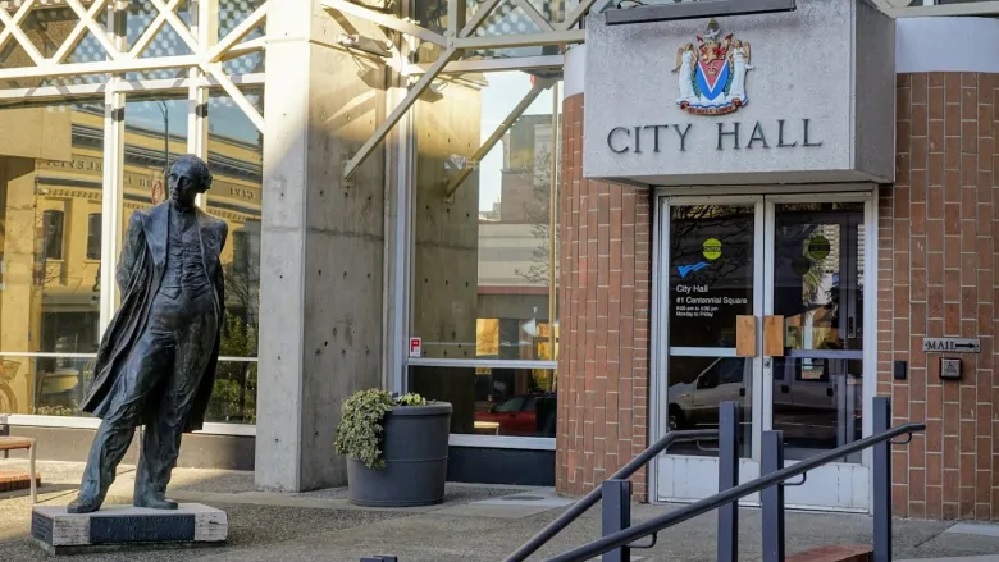 The statue of Sir John A Macdonald as it once stood in front of Victoria City Hall. Council decided to have it removed from public view in August 2018, as an act of reconciliation with Indigenous peoples (Mike McArthur/CBC)

Many have roundly and thoroughly condemned the former Prime Minister for this policy. Many of the statues have been repeatedly vandalized,  and there have been loud calls for statues to be removed, and institutions renamed, In several cases in the past few years this has indeed been the case.

This week some 141 historians, policy experts, academics, teachers, and thought leaders, have called for balance in examining his legacy. Their open letter was published in the National Post newspaper this week. The letter is a joint initiative of the Friends of  Canadian History and the Macdonald-Laurier Institute ,the latter being a non-partisan, independent think tank.

Managing director of the institute and co-signatory Brian Lee Crowley says, “Macdonald was neither angel nor devil, but a fallible human being who accomplished great things. Looking solely at our past errors is not the right standard by which to measure Canada or Sir John A. and their great achievements”, adding,” It is easy to criticize the past and the decisions made there. But it is a conceit of each and every generation that it alone is free from poor judgments, intellectual shortcomings and historical myopia”. 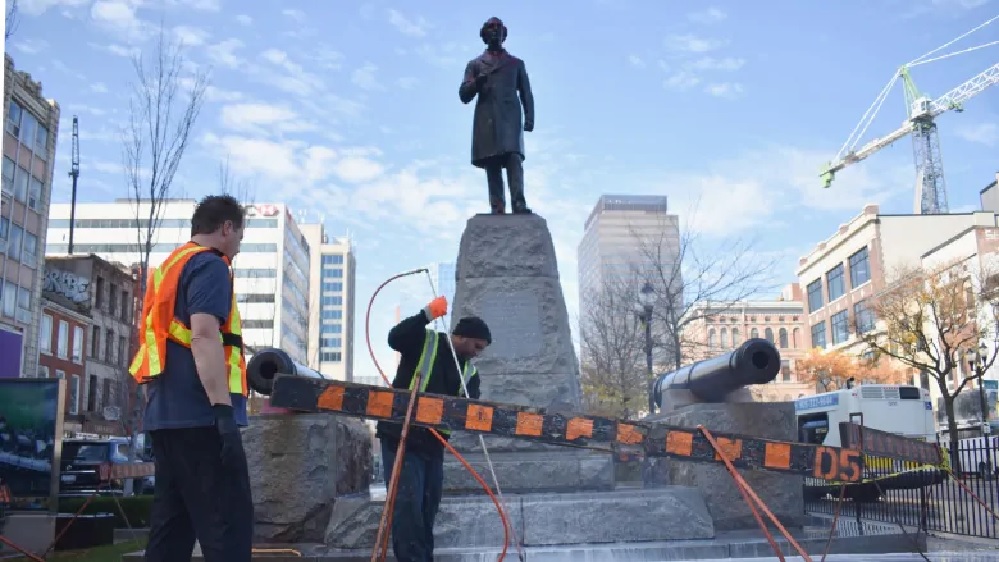 The Sir John A. Macdonald statue in Hamilton’s Gore Park was power-washed by cleaners in November 2020 after someone covered the statue in red paint i. (Bobby Hristova/CBC)

The group of signatories note that there is a growing trend to view only the mistakes in Canada’s history and that is not the way to examine the past.. Others have noted there is a trend to erase history through things like the removal of statues.

The letter begins by noting the interesting phrase he included in the original  British North America Act (often called the Constitution act) of 1867 stating that Canada should have “peace, order, and good government”.  This can be compared to the U.S. concept of  “ life, liberty, and the pursuit of happiness”.

The high school in Upper Tantallon, Nova Scotia school announced in November 2020 that it is being renamed after faculty considered Sir John A. Macdonald’s role in the Indian Residential School System and the Indian Act of 1867. (Google Maps)

While there is no attempt to deny the tragic stain of the residential schools, which is in fact mentioned in the letter, they point out that Canadians should not ignore his impressive successes that led to the creation of the country in spite of great and ongoing challenges.

To that end the letter states, “Macdonald’s failures must, however, be weighed against an impressive record of constitution and nation building”, adding, “All Canadians deserve to hear the full story about Macdonald, the founding of Canada and Canadian history generally. Only then can we form reasoned views about that historical record”.