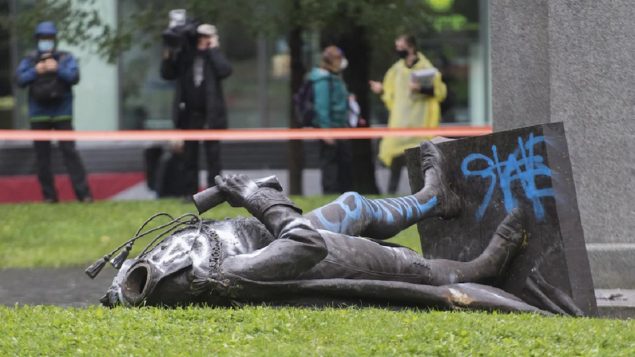 After vandals tore down the statue on Saturday afternoon, it was covered in graffiti (Graham Hughes-CP)

A peaceful march in Montreal on Saturday afternoon calling for defunding of the police ended in the destruction of a statue of Canada’s founder. 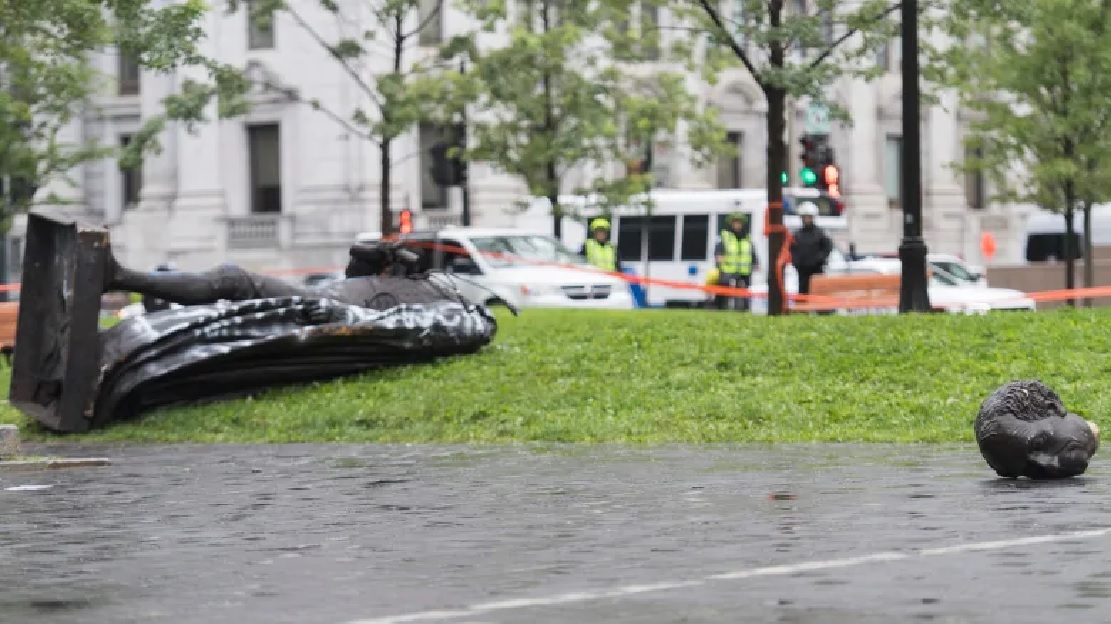 As the statue was pulled down from the pedestal, the head was broken off along with other damage ( Graham Hughes- CP)

The bronze statue of Sir John A. Macdonald has stood for 125 years in the city, but in recent years has been subjected to repeated vandalism in the form of being sprayed with paint by anonymous individuals.

The so-called ‘anti-colonialists’ claim the statue of Canada’s founder and first Prime Minister should be removed because he was racist. They cite such things as his policy regarding Canada’s indigenous population with the creation of the now widely condemned ‘residential school system’, and other policies including a tax on Chinese immigrants, and the hanging of western Canadian Metis leader Louis Riel. 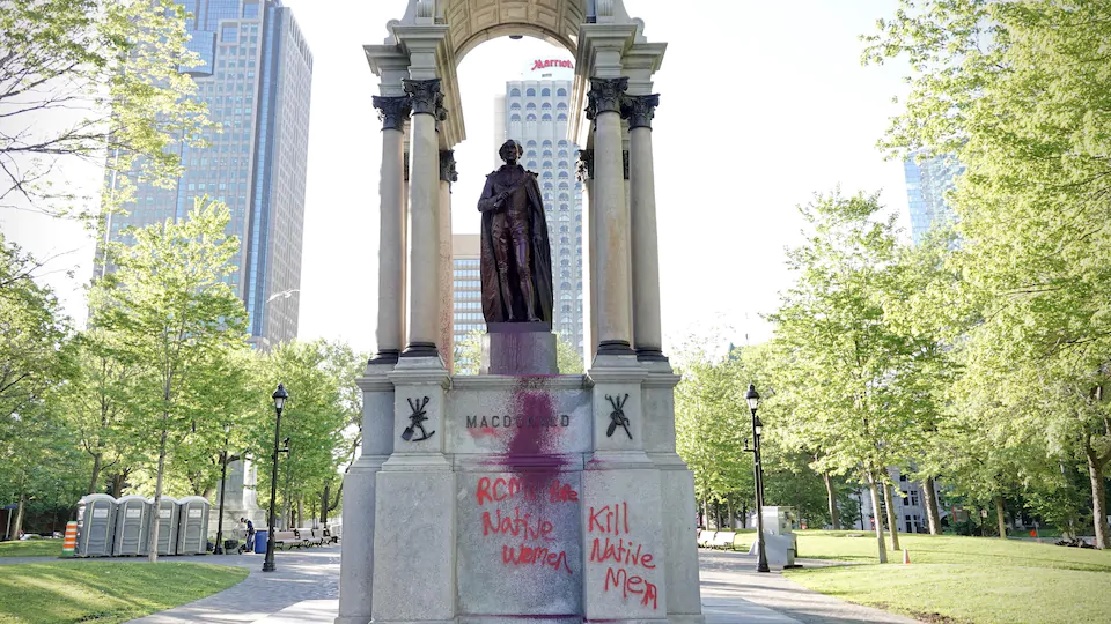 Certain other groups have been calling for the removal of the statue for the past few yearsr. This includes Daniel Paul, a Miꞌkmaq elder, author and human rights activist in Halifax. who is quoted in the Montreal Gazette saying, “I don’t think we should ever have statues of white supremacists. John A. Macdonald was a first-class white supremacist”.

An online petition to have the stature removed now has over 45,000 signatures.

The peaceful march was organised by a group calling itself BIPOC Coalition, (Black Indignous People of Colour), want the city to reduce the police budget by 50 per cent and instead put the money towards social programmes.

Some people in the crowd estimated to be 100-200 in number obviously came prepared with tools and ropes as the statue was unbolted and pulled down. Apparently they were not part of the demonstrators but had a separate agenda. 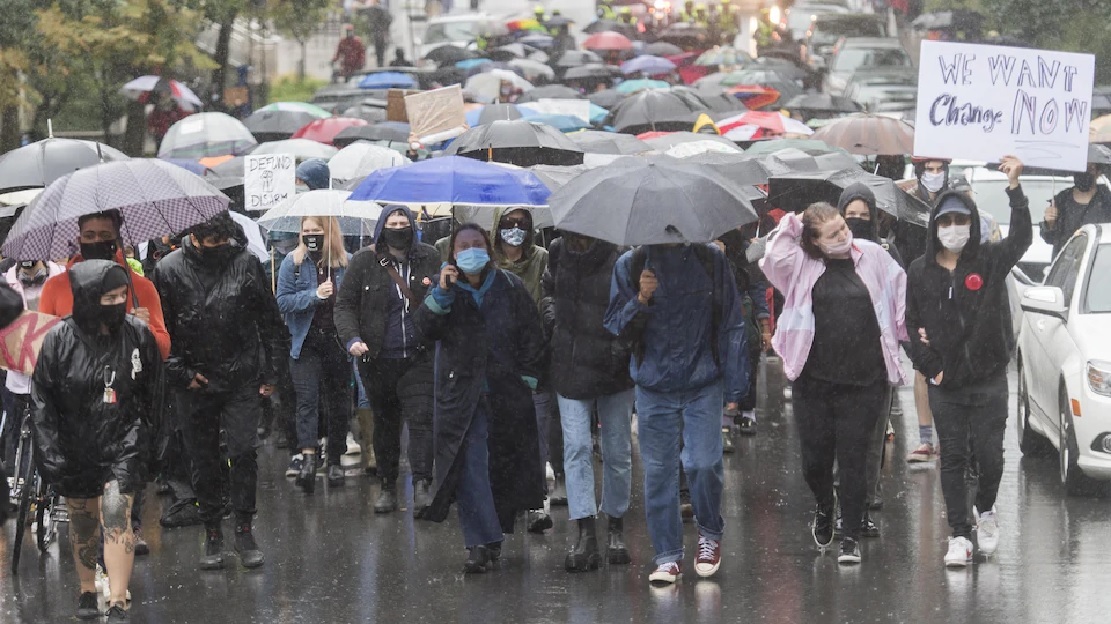 Between roughly 100-200 marchers came out in Saturday’s rain calling for defunding of the police. The group was either inflitrated by another group, or was joined at the downtown site of the statue with the express purpose of pulling it down, ( Graham Hughes- CP)

A flyer handed to reporters apparently by a member of the separate group among the demonstrators said “Today, inspired by a summer of rebellion and anti-racist protest, a diverse coalition of young activists take it upon themselves to act where the city has failed,”

Montreal police were on hand but did not intervene, later calling on the group through loudspeakers to disperse. Police say they will investigate the act and are seeking videos.

Montreal Mayor Valerie Plante deplored the action in a tweet and a statement adding saying the stature will be restored while deciding on the next steps.  In June, in response to a petition to have the statue removed noted she was not opposed to the idea, but added it was important to have an educational perspective and an additional plaque could be added to put his history in context.

“I strongly condemn the acts of vandalism that took place this afternoon in downtown Montréal, which led to the John A. Macdonald statue being torn down. Such gestures cannot be accepted nor tolerated. Some historical monuments, here as elsewhere, are at the heart of current emotional debates. I reiterate that it’s better to put them in context rather than remove them. I am also in favour of adding monuments that are more representative of the society to which we aspire. I understand and share the motivation of citizens who want to live in a more just and inclusive society. The discussion and the actions that are required must be done in a peaceful manner, without ever resorting to vandalism. The public art office will secure the perimeter and coordinate the conservation of the statue. In consultation with the city’s heritage experts, we will take the time to analyze the next steps to be taken. For its part, the SPVM will conduct its investigation.” –Mayor Valérie Plante

Jack Granatstein is a distinguished historian, author, and professor emeritus at York University in Toronto Quoted in the Montreal Gazette he said of Macdonald, “He’s the founder of Canada. He’s the man who created this country, which for all its faults, and there are many, is still the best place in the world to live,” adding, “His views were shared by 99 per cent of Canadians at the time. If you condemn Macdonald, you condemn everyone who lived then”,

He and along with Plante and others have suggested a plaque with additional contextual information could be added to the statue.

Glen Williams, political science professor emeritus at Carleton University in Ottawa in an email to RCI said, “a reasoned discussion based upon historical facts means nothing to vandals who seek to tear down violently the symbols of Canadian democracy. Because they know that their case on Macdonald is too weak to persuade the majority of Canadians within the rules of our democratic processes, they have resorted to brute force. Macdonald’s policies regarding native and Chinese Canadians are cynically being used as a pretext to discredit and tear down the democratic Canadian institutions that Macdonald and his contemporaries established” 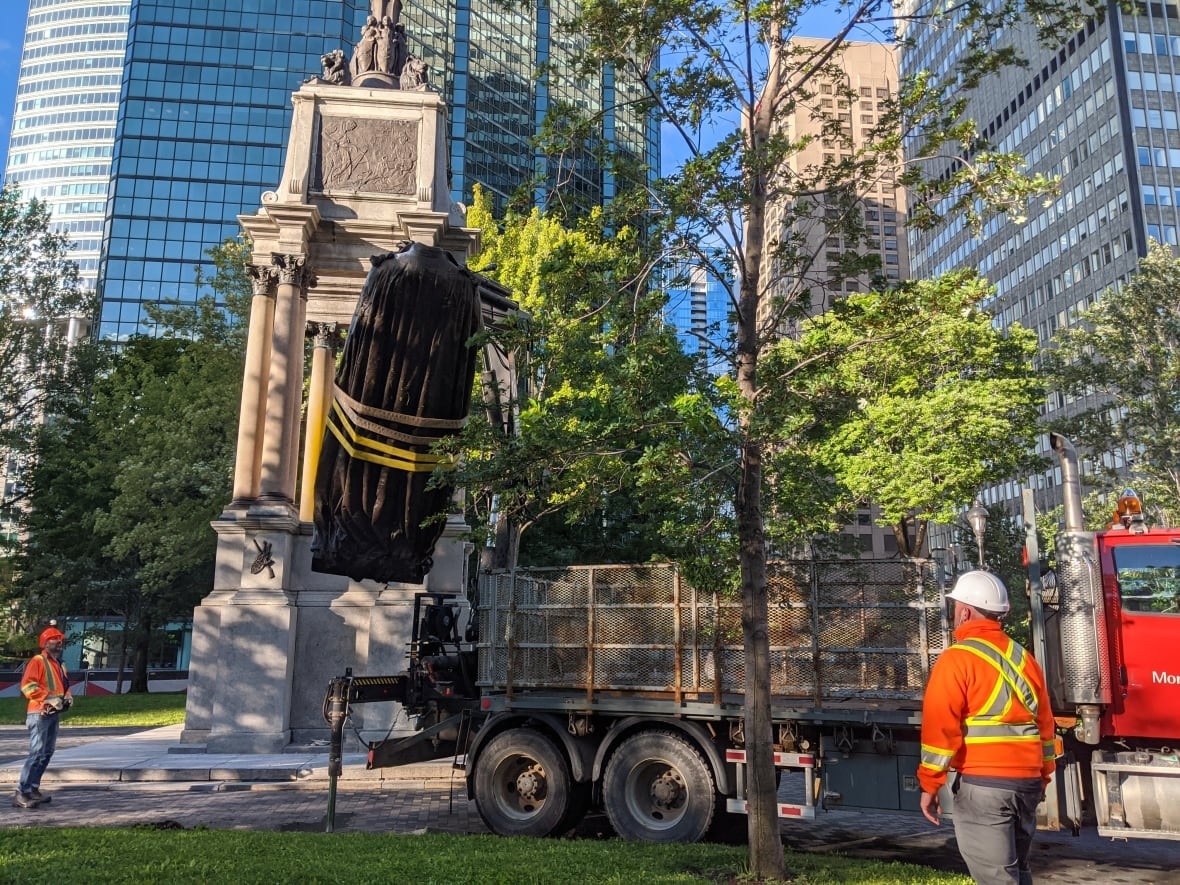 City of Montreal workers hauled away the statue on Sunday and it will eventually be taken to art experts for restoration. Afterward its fate id uncertain. (Mariève Bégin/Radio-Canada)

Dino Bumbaru is the policy director of Heritage Montreal, a non-profit group which seeks to preserve Montreal’s cultural and architectural heritage. Quoted by CBC, he said “many of the historical figures in bronze carry dark memories which our current society sees in a critical eye, which past generations didn’t. Montreal deserves an educated public discussion on this for the 21st century. Not vandalism or similar executions. And Montreal deserves more monuments to add new voices. Not less.”

Quebec Premier Francois Legaut also condemned the vandalism in a tweet in French loosely translated as, “whatever one thinks of John A Macdonald, destroying a statue is unacceptable. We must fight racism, but to tear down parts of our history is not a solution. The statue should be restored” 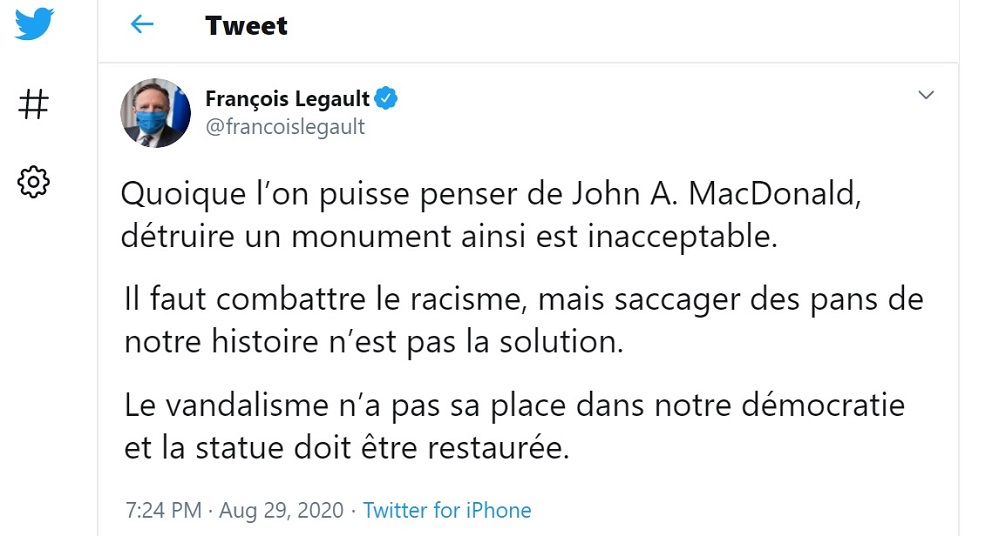 Alberta Premier Jason Kenney tweeted on the weekend that if Montreal no longer wanted the statue that he would accept it.