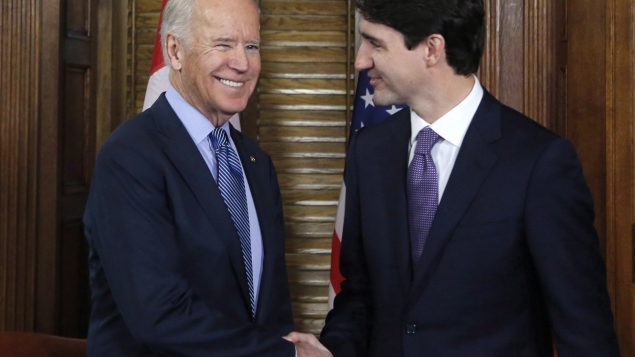 Speaking during her first briefing with the media, Psaki said the two leaders will discuss bilateral issues, including Biden’s decision to formally revoke the permit needed to build the Keystone XL oil pipeline.

The phone call comes as Trudeau faces pressure from Alberta Premier Jason Kenney to “respond with consequences for this attack on Canada’s largest industry.”

Kenney took to Twitter late Wednesday to say that he was “deeply disturbed” by Biden’s decision to revoke the Keystone XL pipeline permit.

The United States is our most important ally & trading partner.

As friends & allies, we are deeply disturbed that one of @POTUS first actions was to rescind the Presidential permit for Keystone XL Pipeline border crossing.

That’s not how you treat a friend & ally.
My statement: pic.twitter.com/v2vRrs5vPn

“This is not how you treat a friend and ally,” Kenney said. “Alberta’s government calls for the federal government and Prime Minister Trudeau to immediately enter into talks with the Biden administration on their cancellation of the Keystone XL pipeline in the context of a broader agreement on energy supply and climate action.”

Kenney said he wants Trudeau to respond to the cancellation of Keystone XL the same way his government acted when the Trump administration imposed additional tariffs on Canadian steel and aluminium, and Canada slapped its own tariffs on a broad range of strategically selected U.S. goods.

“Failing an agreement with the American government, we call on the Government of Canada to respond with consequences for this attack on Canada’s largest industry,” Kenney said.

“We are not asking for special treatment, simply the same response that Canada’s government had when other areas of our national economy were under threat from the U.S. government.”

Conservative Leader Erin O’Toole said Trudeau “should have done more to stand up for our world-class energy sector and the men and women who depend on it to provide for their families.”

“For years, Conservatives have been calling on the Trudeau Liberals to champion Canadian energy and workers,” O’Toole said in a statement. “Yet, they have failed to do so time after time.”

Today’s cancellation of the Keystone XL pipeline extension is devastating.

We need to get as many people back to work, in every part of Canada, in every sector, as quickly as possible.

Green Party Leader Annamie Paul, on the other hand, welcomed the cancellation of the controversial pipeline project as “powerful proof that President Biden is determined to make climate leadership a hallmark of his presidency.”

“The cancellation of Keystone means that Canada need not expend political capital lobbying for the project,” Paul said in a statement. “Instead, Prime Minister Trudeau can focus on working with the Biden administration to ensure that North America becomes a world leader on the climate and the green economy.”

Today’s Executive Order revoking #KeystoneXL is powerful proof @JoeBiden plans to make climate leadership a hallmark of his presidency. I’m tired of seeing Canada fall further behind in the global race for a green economy while others countries, like the U.S., push ahead #cdnpoli

On Wednesday, Trudeau said that while he is disappointed with Biden’s decision, he acknowledges “the President’s decision to fulfil his election campaign promise on Keystone XL.”

In a statement congratulating Biden and Vice President Kamala Harris on their inauguration, Trudeau said Canada and the U.S. “enjoy one of the most unique relationships in the world, built on a shared commitment to democratic values, common interests, and strong economic and security ties.”

“Canada and the United States have worked side-by-side to tackle some of the greatest challenges we have faced in our history,” Trudeau said.

“We will continue this partnership as we fight the global COVID-19 pandemic and support a sustainable economic recovery that will build back better for everyone.”

The two countries will also “work together to advance climate action and clean economic growth, promote inclusion and diversity, and create good middle class jobs and opportunities for our people while contributing to democracy, peace, and security at home and around the world,” Trudeau added.

“I look forward to working with President Biden, Vice President Kamala Harris, their administration, and the United States Congress as we strive to make our countries safer, more prosperous, and more resilient.”