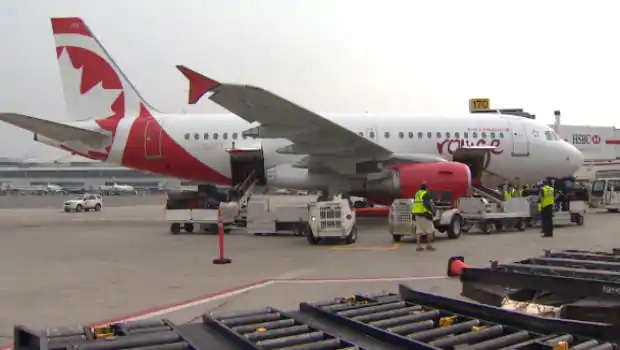 Air Canada is suspending flights on it low-cost Rouge subsidiary, as of Monday. About 80 people will lose their jobs. (CBC News)

Air Canada suspends its Rouge flights indefinitely, as of Monday

Air Canada has suspended all flights on its low-cost Rouge subsidiary, as of Monday.

“As a result of our suspension of all flights to the Caribbean and Mexico at the request of the Canadian government, we are again pausing our Rouge operations effective Feb. 8 as these flights are primarily operated by Rouge,” Air Canada, the country’s largest airline, said in a statement.

Air Canada said about 80 employees will be laid off following the final Rouge flight, the latest blow to workers in Canada’s hard-hit airline industry.

In May, Air Canada laid off about 20,000 workers because of the pandemic, which has severely impacted the travel sector in countries around the world.

The announcement comes less than a week after Prime Minister Justin Trudeau issued a series of restrictions that effectively banned flights to so-called sun destinations in the Caribbean and Mexico.

“With the challenges we currently face with COVID-19, both here at home and abroad, we all agree that now is just not the time to be flying,” Trudeau said as he made when he announced the measures last Friday.

Later that day, Air Canada, WestJet, Sunwing and Air Transat said they were suspending service to sun destinations, including Mexico and the Caribbean–from last Sunday until April 30,

As of 11:59 p.m. ET yesterday, all international passenger, private and charter flights, including from the U.S., must land at the Vancouver, Toronto, Calgary and Montreal airports.

The only exemptions: Cargo-only flights.

Rouge flights were suspended for most of 2020 but restarted in November ahead of the winter travel season and Air Canada says Rouge “remains a part of Air Canada’s overall business strategy.”