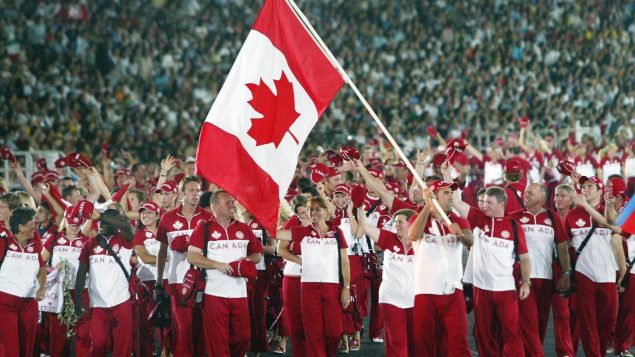 Nicolas Gill, a two-time Olympic medalist, carries the Maple Leaf as he leads Team Canada into the stadium during opening ceremonies for the 2004 Summer Olympics in Athens on August 13, 2004. The federal government is reported to be working on a plan that will exempt Olympic and Paralympic athletes as well as members of their support teams from quarantine-related travel restrictions as they prepare for this year's Tokyo Summer Olympics. (CP PHOTO/Ryan Remiorz)

Radio-Canada is reporting that the federal government has a plan that will exempt Olympic and Paralympic athletes, as well as members of their support teams, from quarantine-related travel restrictions as they prepare for this year’s Tokyo Summer Olympics.

The assistance would focus on athletes who must travel abroad to take part in competitions to qualify for the Games.

Prime Minister Justin Trudeau announced in January that travellers returning to Canada will have to wait up to three days at a government-approved hotel for their COVID-19 test results at their own expense–which, he said, could be expected to run to more than $2,000 per person. 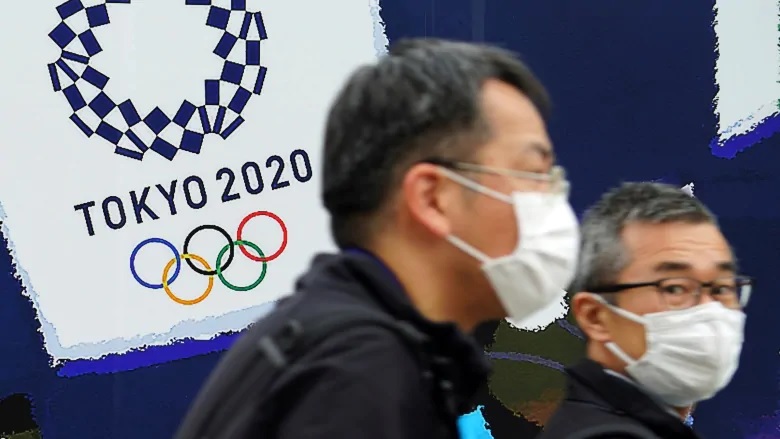 It’s the kind of money most Olympic athletes might have trouble coming up with, and on Tuesday Minister of Canadian Heritage Steven Guilbeault told Radio-Canada in an exclusive interview that an agreement has been reached between the federal government, the Canadian Olympic Committee and major sports federations to facilitate the return of athletes to Canada.

Guilbeault provided no details of the plan, but a high level source with knowledge of the issue later told CBC News that Ottawa is working on a mechanism that would allow athletes to avoid paying costs associated with the initial isolation period.

The official said that changes to quarantine and isolation requirements are not likely.

Guilbeault said the implementation of the exemptions will be swift, since “we already have athletes who are outside and who are about to come back, so we must move quickly on this.”

The federal government has not said when the new restrictions for travellers returning to Canada on international flights will take effect.

In a related development, the leader of the Canada’s Green Party, Annamie Paul, told a virtual news conference on Tuesday that Canada should support moving the 2022 Winter Olympics outside China because of what she called Beijing’s “genocidal campaign” against the Uighur Muslim minority. 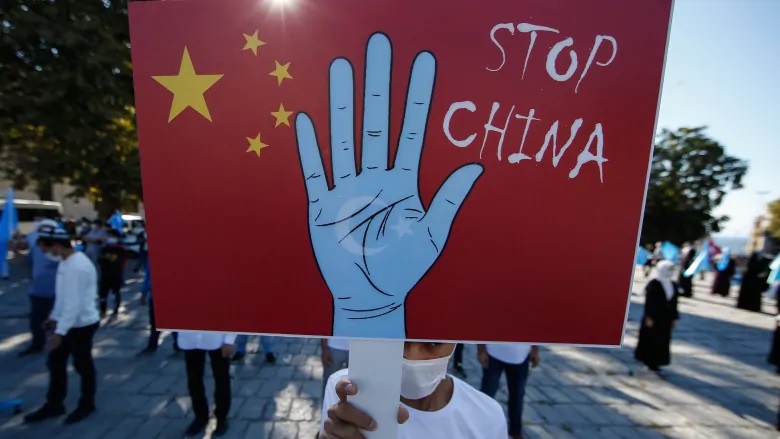 A protester from the Uighur community living in Turkey holds an anti-China placard during a protest in Istanbul on Oct. 1, 2020. (AP PHOTO/Emrah Gurel)

Paul added that Canada should consider offering to host the the Games, which are scheduled to be held next February, possibly with the United States.

“China has proven itself to be incredibly resistant to liberalization of human rights and fundamental freedoms,” Paul said.

“There is no reason to credibly believe that the celebration of the 2022 Olympics in Beijing, alongside a genocide, will produce any such results.”

On Saturday, 13 MPs from all five major federal parties released a letter that urged the International Olympic Committee to move the 2022 Winter Games to another country over reported human rights abuses of China’s Uighur minority.

China has rejected the charges, calling them “baseless.”

Beijing says it is running a voluntary employment and language-training program for the Uighurs.

In October, a Canadian parliamentary subcommittee issued a report that concluded that China’s treatment of the Uighurs meets the definition of genocide set out in the 1948 Genocide Convention.