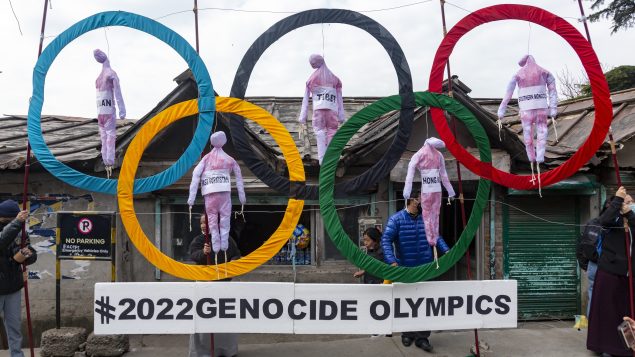 Exiled Tibetans use the Olympic Rings as a prop as they hold a street protest against the holding of 2022 Winter Olympics in Beijing in Dharmsala, India, on Feb. 3, 2021. Five effigies represent Taiwan, Tibet, Hong Kong, Inner Mongolia and the region ethnic Uighurs call 'East Turkestan', under Chinese control. Today, the leader of Canada's Official Opposition Conservative Party of Canada said next year's Games should not be held in China. (AP Photo/Ashwini Bhatia)

The leader of Canada’s Official Opposition is calling on Prime Minister Justin Trudeau to push the International Olympic Committee to move the 2022 Winter Games out of China.

“Canada must take a stand, but we do not need to do this alone. We should work with our closest allies,” he said.

O’Toole said Canada should not send athletes to the Beijing Games while China is committing human rights violations against part of its population, but he stopped short of suggesting Canada should boycott the Games, or step forward to host them.

But, he said, if the Olympics are not moved, a boycott could be considered. 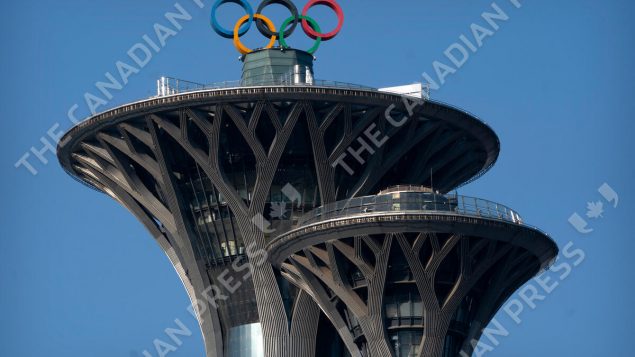 The Olympic rings are visible atop the Olympic Tower in Beijing on Feb. 2. Next year’s Winter Games are already scarred by accusations of rights abuses including “genocide”against more than one million Uighurs and other Muslim ethnic groups in western China. (AP Photo/Mark Schiefelbein)

O’Toole is the second federal party leader to speak to the matter in the past week.

Last Tuesday, the Green Party’s Annamie Paul told news conference that Canada should support moving the 2022 Games because of what she called Beijing’s “genocidal campaign” against the Uighurs.

The previous Saturday, 13 MPs from all five major federal parties released a letter urging the IOC to move the 2022 Games because of the treatment of the Uighurs.

Beijing has denied charges of mistreatment, saying it is running a voluntary employment and language-training program for the Uighurs.

In October, a Canadian parliamentary subcommittee issued a report that concluded that China’s treatment of the Uighurs meets the definition of genocide set out in the 1948 Genocide Convention. 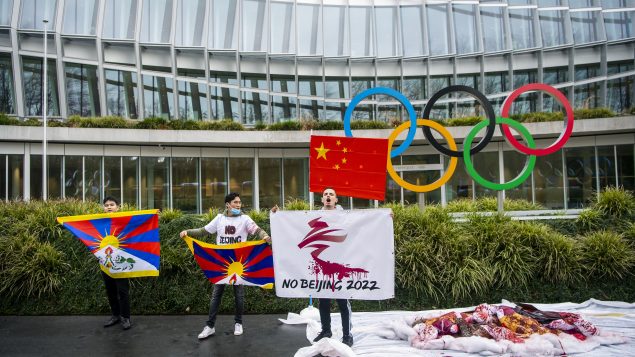 Protesters hold Tibetan flags during a protest against Beijing 2022 Winter Olympics by activists of the Tibetan Youth Association in Europe, in front of the International Olympic Committee, IOC, headquarters in Lausanne, Switzerland, on Feb. 3. A coalition of 180 rights groups is calling for a boycott of next year’s Beijing Winter Olympics tied to reported human rights abuses in China. The games are to open on Feb. 4, 2022. The coalition is made up of groups representing Tibetans, Uighurs, Inner Mongolians and others. The group has issued an open letter to governments calling for a boycott of the Olympics “to ensure they are not used to embolden the Chinese government’s appalling rights abuses and crackdowns on dissent.” (Keystone via AP/Jean-Christophe Bott)

That same month, British Foreign Secretary Dominic Raab said a boycott of the 2022 Games by his country was a possibility, pointing to what he called “egregious human rights abuses” against the Uighurs.

Earlier this month, a coalition of 180 rights groups representing Tibetans, Uighurs,Inner Mongolians, Hong Kong residents and others signed an open letter calling for a diplomatic boycott of the 2022 Games.

With files from CBC News, The Canadian Press, The Associated Press, RCI