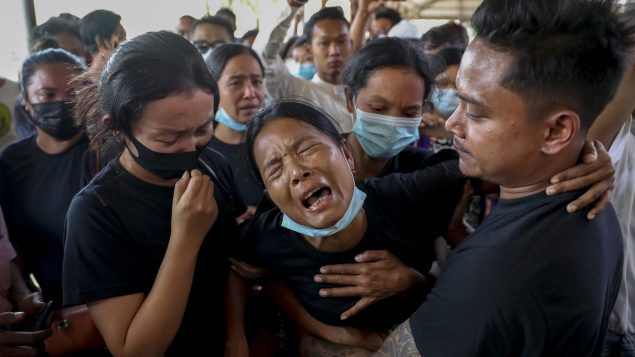 Thida Hnin cries during the funeral on Tuesday of her husband, Thet Naing Win, at Kyarnikan cemetery in Mandalay, Myanmar. Thet Naing Win was one of two persons shot and killed by Myanmar security forces during an anti-coup protest on Saturday. Today, G7 foreign ministers, including Canada's Marc Garneau, condemned violence by security forces in the country. (AP Photo)

Group of Seven foreign ministers, including Canada’s Marc Garneau, have issued a statement condemning violence by security forces in Myanmar.

The statement comes as Western countries are increasing pressure to prevent the junta, that took power on Feb. 1, from a further crackdown on protesters, who were back in the streets again today following massive demonstrations on Monday after two protesters were shot and killed on Saturday. 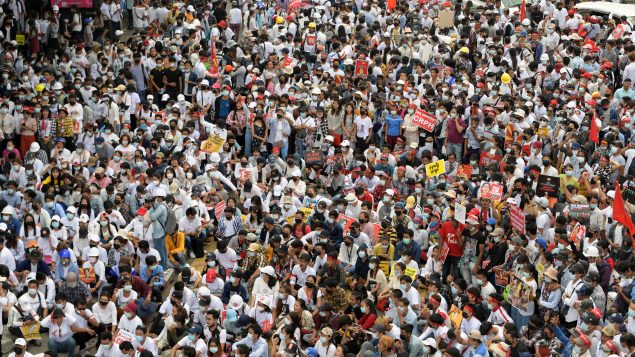 Tens of thousands of demonstrators rallied Monday in Yangon to protest the military coup. (REUTERS/Stringer)

“Anyone responding to peaceful protests with violence must be held to account, the foreign ministers said in a joint statement.

“We condemn the intimidation and oppression of those opposing the coup… We remain united in condemning the coup in Myanmar. We call again for the immediate and unconditional release of those detained arbitrarily, including State counselor Aung San Suu Kyi and President Win Myint.”

Earlier this month, the G7 foreign ministers issued a statement condemning the coup, and last week Canada joined the European Union, the United Kingdom and 11 other nations condemning actions taken by the junta.

“We support the people of Myanmar in their quest for democracy, freedom, peace and prosperity. The world is watching,” the statement said. 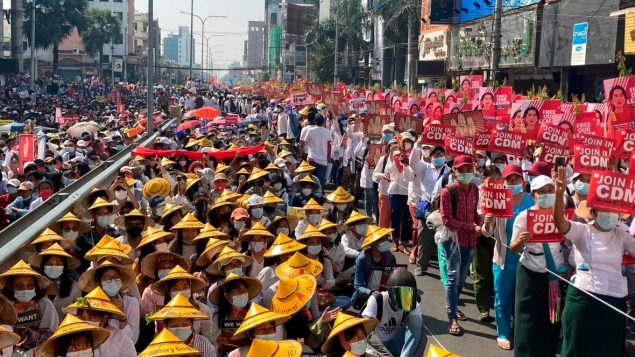 Anti-coup protesters are pictured during a rally in Mandalay on Monday. (AP Photo)

Today, the EU said it would impose sanctions on Myanmar while the United States penalized two generals for links to the coup.

Meanwhile, Indonesia dismissed a Reuters report suggesting that Jakarta was preparing to help the Myanmar military uphold a promise of holding a new election. 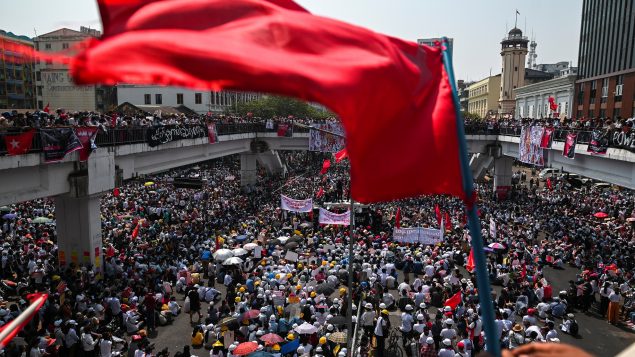 A flag is waved as demonstrators protested Monday against the Feb. 1 military coup in Myanmar. International pressure is mounting against the generals who led it. Today, the European Union said it was imposing sanctions. (REUTERS/Stringer)

“The generals are losing their power to intimidate and with it, their power. It is past time for them to stand down, as the people of Myanmar stand up,” Andrews said on Twitter.

The photos of yesterday’s massive crowds are breathtaking. Millions marched despite the junta’s “loss of life” threats. The generals are losing their power to intimidate and with it, their power. It is past time for them to stand down, as the people of Myanmar stand up. 📹@RFA pic.twitter.com/j4VDheONbs

Wire service reports said Tuesday’s numbers were down from Monday’s massive crowds, but around 1,000 people had gathered by mid-morning at Yangon’s Hledan Center, a prominent meeting place for protesters,.

The reports said groups had also gathered elsewhere in the city.

Human Rights groups estimate that around 700 people have been arrested, charged or sentenced since the coup.

The protest movement has embraced nonviolence but protesters have occasionally become involved in shoving matches with police and thrown bottles at them when provoked. 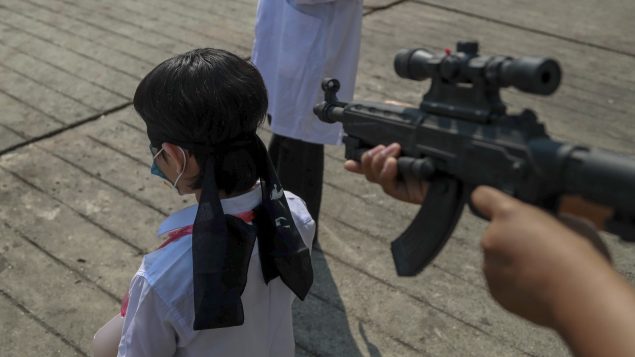 Anti-coup protesters depict the plight of a civil servant being forced to work at gunpoint by the military junta during an anti-coup demonstration in Yangon on Tuesday. (AP Photo)

The junta, led by Senior Gen. Min Aung Hlaing, said it stepped in earlier this month because the government had not properly investigated allegations of fraud in an election last November that Suu Kyi’s National League for Democracy party won in a landslide.

The state election commission said there was no evidence to support the claim and Canada quickly condemned the coup.

In October, 2018, Suu Kyi became the first person ever to be stripped of honorary Canadian citizenship, for her role in gross human rights violations against the Rohingya Muslims. 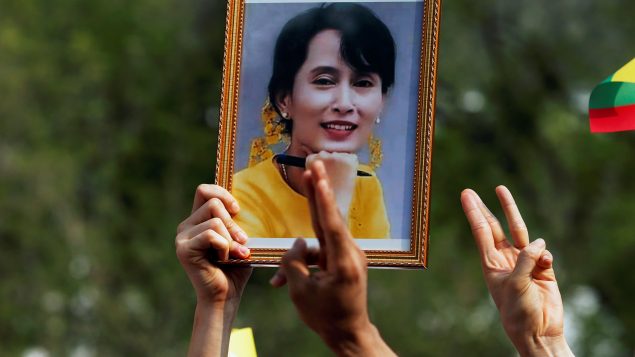 A person holds a picture of leader Aung San Suu Kyi as Myanmar citizens protest against the military coup in front of the UN office in Bangkok, Thailand on Monday. (REUTERS/Soe Zeya Tun)

The action was taken after Canada’s Special Envoy to Myanmar, Bob Rae, released a report in April 2018, outlining the underlying causes of the what became known around the world as the Rohingya Crisis that saw at least 700,000 Rohingya Muslims forced to flee western Myanmar’s Rakhine state to neighbouring Bangladesh following a military crackdown.

Canada committed $300 million over three years to help respond to the crisis.

According to the United Nations, more than 900,000 Rohingya Muslims currently live in the refugee camps.

With files from Reuters, The Associated Press, CBC News