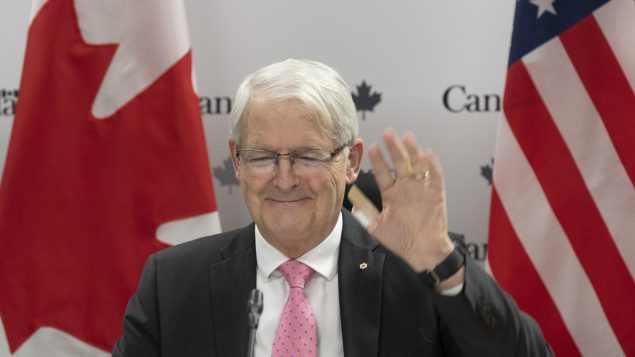 Now is not the time for Canada and U.S. to turn inward, says Garneau

As human and economic costs of the COVID-19 pandemic continue to rise in Canada and the U.S., the two neighbours need to come together to address challenges facing both countries, Foreign Affairs Minister Marc Garneau said Friday.

Addressing his U.S. counterpart, Secretary of State Anthony Blinken, as the top American diplomat began his virtual tour of Canada, Garneau said “both Canadians and Americans have been impacted by this pandemic and have suffered losses and faced many challenges in this crisis.”

“I think you’ll agree with me now is not the time for our two nations to turn inward,” Garneau said in a tacit reference to the America First policies of the previous Trump administration.

“It’s important that we work together to fight COVID-19, support our citizens, and ensure that a sustainable and inclusive economic recovery can happen,” Garneau said.

It’s also important that Canada and the U.S. maintain the integrity of their cross-border supply chains, Garneau added, echoing Canadian concerns about the Biden administration’s Buy American policies that could freeze out Canadian companies from lucrative U.S. infrastructure projects.

The Canada-U.S. trade relationship is balanced, fair, and highly complementary in many areas, Garneau added. 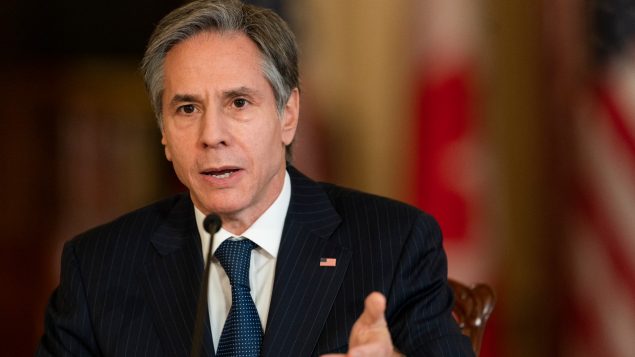 Secretary of State Antony Blinken, speaks during a virtual meeting at the State Department in Washington, Friday, Feb. 26, 2021, with Canadian Foreign Minister Marc Garneau who is in Ottawa, Canada. (Manuel Balce Ceneta/AP Photo/Pool)

Responding to Garneau’s comments, Blinken said he was “really pleased” with the renewal of partnership between the U.S. and Canada, and the roadmap agreed to by Biden and Trudeau.

“It’s hard to think of two countries whose destinies are more connected, more intertwined than ours,” Blinken said.

“I would say one of the things that’s so important is that when we’re working together, especially on the many global challenges that confront both of our countries and both of our peoples, we are really democratic and diplomatic force multipliers for each other. And that’s something that the United States places great, great value in.”

The meeting between the top diplomats was expected to cover a very wide range of bilateral issues.

“The U.S.-Canada Partnership Roadmap will guide our two countries as we work hand-in-hand on shared areas of concern,” said a statement released by the State Department.

“These concerns include combatting COVID-19; driving economic recovery; leading on climate change; advancing diversity and inclusion in both our societies; expanding our security and defense cooperation, including through NATO and NORAD; and jointly addressing shared challenges through multilateral institutions.”

The statement also mentioned the challenge of dealing with a resurgent and increasingly assertive China.

“Beijing is now challenging our security, prosperity, and values in significant ways that require a new approach, and the United States will work closely with Canada to address these challenges,” the statement said. “The United States stands with Canada regarding the arbitrary detentions of Canadian citizens Michael Spavor and Michael Kovrig and continues to call on Beijing for their immediate release.”

The two diplomats were also expected to discuss cooperation with NATO and modernization of the North American Aerospace Defense Command (NORAD).

“NORAD is the crown jewel of U.S.-Canada defence cooperation,” the statement said.

After 60 years, NORAD remains the only binational military command in the world, State Department said, adding that Washington welcomes “Canada’s reinforced commitment to NORAD as we modernize the command to meet new global security challenges.”

“The United States and Canada recognize the unique challenges, opportunities, and obligations as Arctic states, and commit to launching an expanded Arctic Dialogue, covering security, economic and social development, and governance,” the statement said.