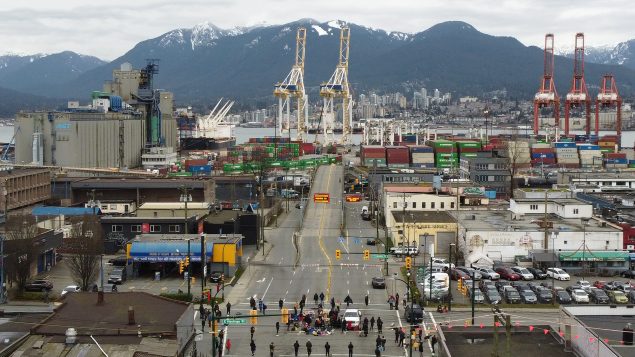 A group of demonstrators, bottom centre, block an entrance to the Port of Vancouver on Wednesday. Indigenous youth calling themselves the Braided Warriors took the action to protest a 90-day jail sentence handed to an anti-pipeline protester, Stacy Gallagher. (THE CANADIAN PRESS/Jonathan Hayward)

A protest by Indigenous youth that temporarily shut down a major intersection in Vancouver and prevented access to the city’s port ended peacefully Wednesday night after four of the demonstrators–all of them adults–were arrested.

The protest began 24 hours earlier at the intersection of Hastings and Clark Streets when about 20 people, who said they were members of the Braided Warriors, gathered to protest a 90-day jail sentence handed to an elder, Stacy Gallagher. 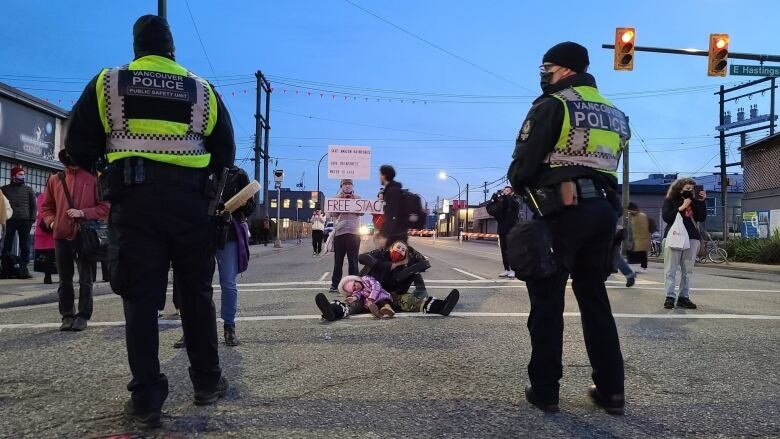 After Gallagher was sentenced Tuesday, about 20 people gathered at the intersection.

Their number later grew to about 75. 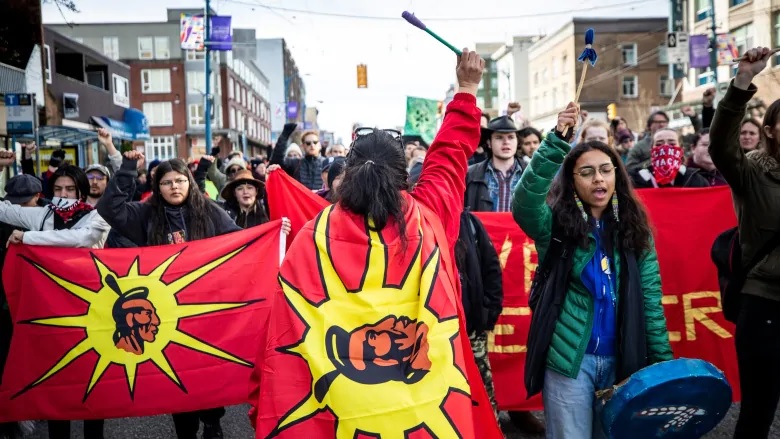 Demonstrators block an entrance at the same intersection last in Feburary of last year. (Ben Nelms/CBC)

A participant in the protest, who spoke with a reporter from the website Vancouver is Awesome on Wednesday morning, called Gallagher’s jailing a “blatant act of systemic racism.”

“We’re here in solidarity with our ‘uncle’ who has been fighting this for years,” she said.

Vancouver police Sgt. Steve Addison said the four people who were arrested were all adults and were taken to jail before being released on a promise to appear in court.

“The VPD strongly supports peoples’ fundamental freedom to peacefully gather, demonstrate, and express their views, and this group was given a full day to do that,” Addison said in a press release.

“When it became clear some protesters had no intention of leaving, officers were forced to arrest them to reopen the intersection for all road users.”

Opponents of the pipeline have held a number of protests over the past two years. 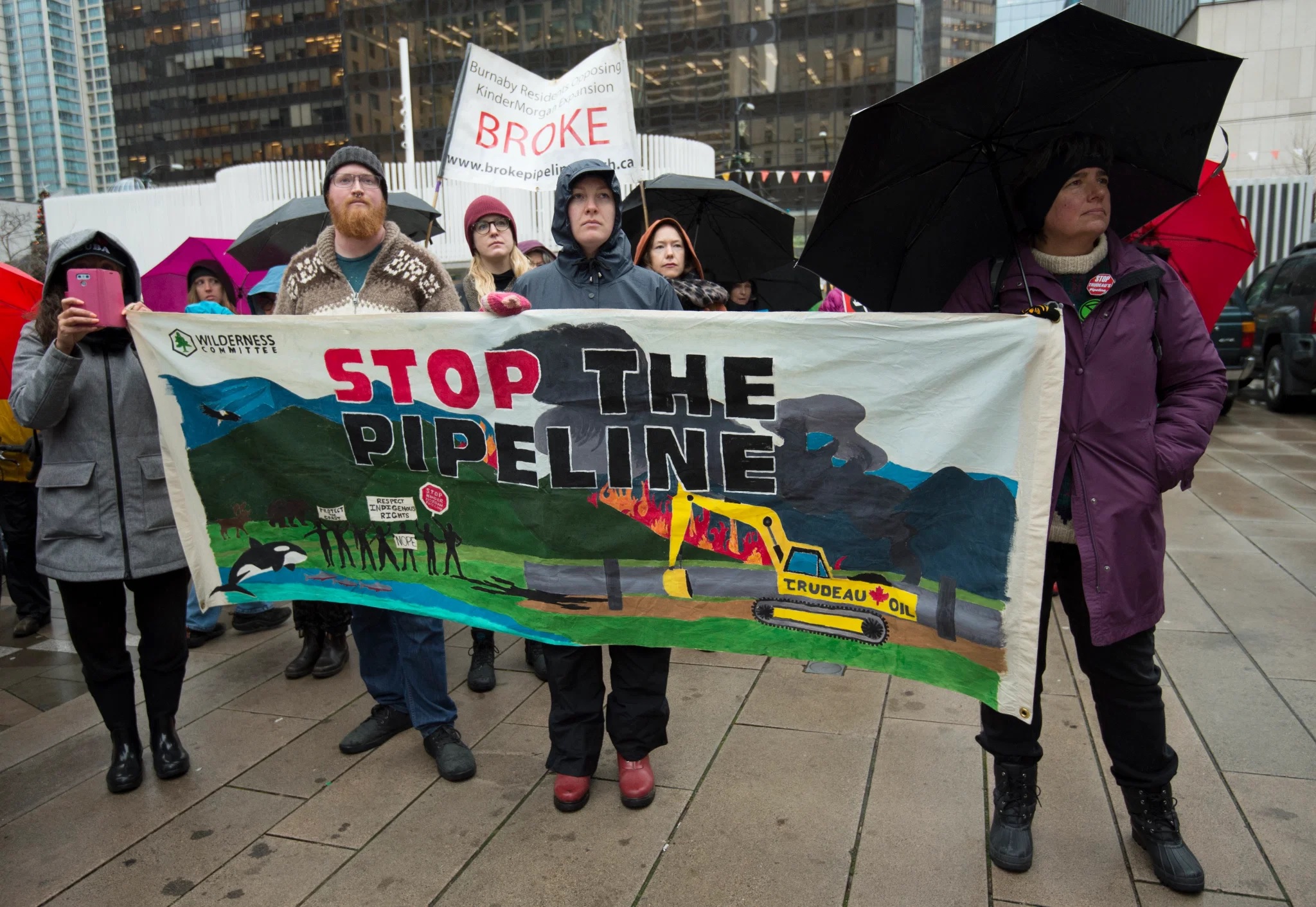 In February, dozens demonstrated outside the offices of Trans Mountain pipeline insurer AIG, where, they said, they had been treated badly by police.

The Union of B.C. Indian Chiefs said it planned to file a complaint to the UN’s Human Rights Council Committee on the Elimination of Racial Discrimination.

In addition to demonstrations and protests, Indigenous groups who oppose the pipeline have gone to court to try to stop it. 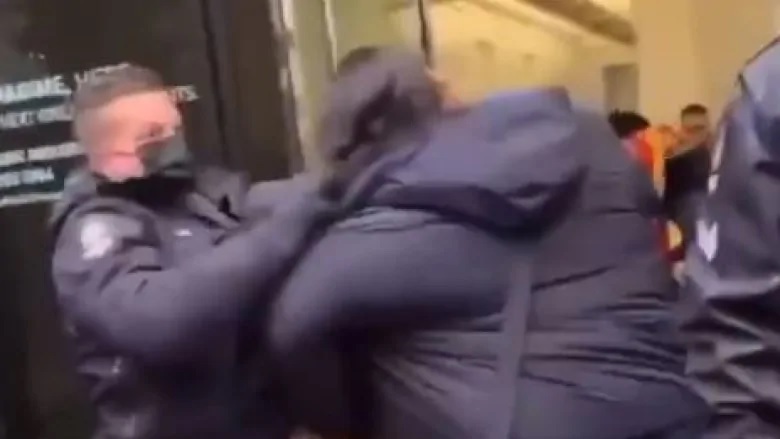 Video posted to social media showing protesters clashing with VPD officers has led to a review of the officers’ actions by the department’s professional standards section. (Kanahus Manuel)

But in a major victory in February, the Federal Court of Appeal dismissed an appeal by Indigenous groups challenging the federal government’s approval of the Trans Mountain expansion project.

Following the ruling, activists said they were a long way from giving up.

“For the longest time, I’ve been, from my elders, under strict orders to do this in a peaceful way,” Will George of the Tsleil-Waututh Nation, said. 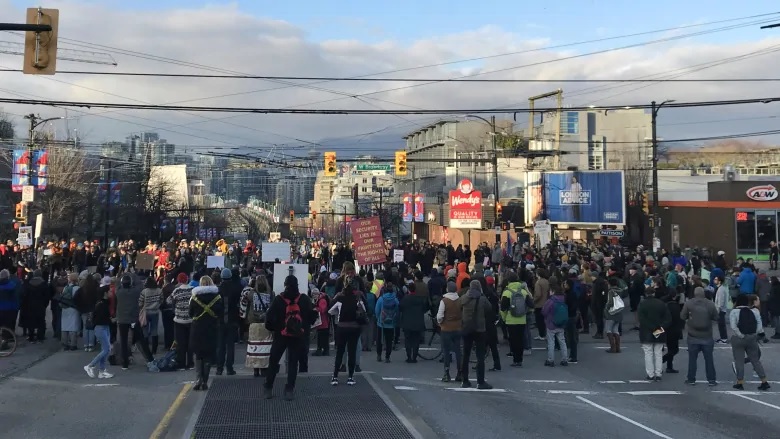 Last year, pipeline and railway protests were held across Canada

The main issue was the construction of the Coastal GasLink Pipeline through 190 kilometres of Wetʼsuwetʼen First Nation territory in British Columbia land that is unceded.

Other concerns of the protesters were indigenous land rights, the actions of police, land conservation, and the environmental impact of energy projects.