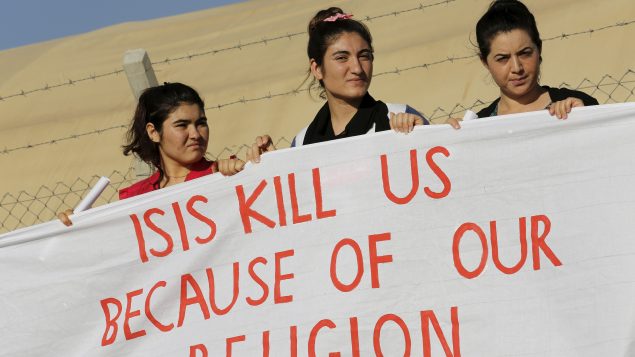 Yazidi refugee women stand behind a banner as they wait for the arrival of United Nations High Commissioner for Refugees Special Envoy Angelina Jolie at a Syrian and Iraqi refugee camp in the southern Turkish town of Midyat in Mardin province, Turkey, June 20, 2015. (Umit Bektas/REUTERS)

Canada to welcome more Yazidi refugees and other survivors of ISIS

The federal government is planning to resettle in Canada hundreds of additional Yazidi refugees and other survivors of the Islamic State reign of terror in Northern Iraq in an effort to help reunite refugees with surviving members of their extended families, federal officials told Radio Canada International Thursday.

Since 2017, Canada has resettled about 1,400 survivors – mostly women and girls – of the ISIS genocidal campaign to target religious minorities in Northern Iraq. However, many of the refugees had to leave family members behind.

Minister of Immigration, Refugees and Citizenship Marco Mendicino announced Tuesday a new policy that will allow these refugees to reunite with extended family members, including siblings, grandparents, aunts and uncles.

“Having survived abuse, torture and even genocide at the hands of Daesh, the Yazidis and other groups are among the most vulnerable refugees in the world,” Mendocino said in a statement, referring to the Arabic acronym for ISIS.

“Guided by compassion, we are now redoubling our efforts to reunite their families. Our new policy will ensure that more Yazidis and other survivors can be reunited with loved ones so that they can start new lives in Canada.”

Mendicino’s press secretary, Alexander Cohen, told Radio Canada International that the federal government expects that this new policy will support the resettlement of some 250 family and extended family members who were in captivity or missing as well as others who didn’t meet the definition of immediate family member or refugee.

“We are already working with partners to identify vulnerable Yazidi women and children and other survivors of Daesh and their family members, and we expect to begin welcoming them to Canada later this year,” Cohen said in an email. 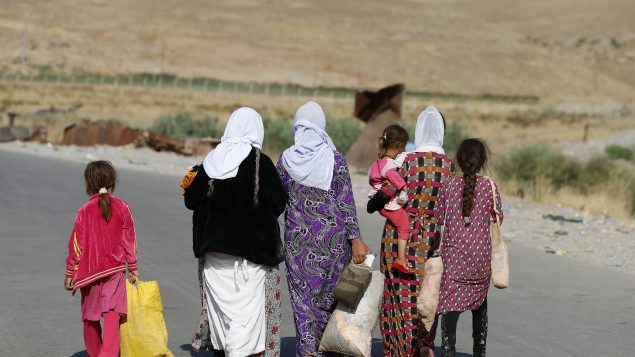 Women and children from the minority Yazidi sect, fleeing the violence in the Iraqi town of Sinjar, walk to a refugee camp after they re-entered Iraq from Syria at the Iraqi-Syrian border crossing in Fishkhabour, Dohuk province, Aug. 14, 2014. (Youssef Boudlal/REUTERS)

These kinds of operations are “extremely difficult and complex” given the volatility in region, Cohen said.

“Furthermore, identifying vulnerable Yazidi women and children and other survivors of Daesh for resettlement is particularly challenging and makes this effort very different from Canada’s resettlement of Syrian refugees, where government-assisted refugees were selected from pools of refugees already registered with the United Nations Refugee Agency,” Cohen said.

In anticipation of these new refugees, the federal government has plans and personnel in place to ensure these families are properly supported, he added.

“Due to reasons of operational security and to protect the safety of the survivors of Daesh, as well our partners and our staff, we cannot provide details on if or when personnel may be dispatched to the region,” Cohen said.

In 2017, Canadian officials worked in close collaboration with the Iraqi government, the Kurdish Regional Government in Northern Iraq, the International Organization for Migration, the United Nations refugee agency, and Yazda, an international NGO working to help Yazidi survivors of ISIS atrocities, to identify and process refugees for resettlement in Canada.

They’ve been primarily resettled to Toronto, London, Winnipeg, and Calgary. These cities were chosen following comprehensive consultations with stakeholders to identify where existing Yazidi communities were established and where adequate support, including medical, psychosocial, and interpretation services, was in place, officials said.