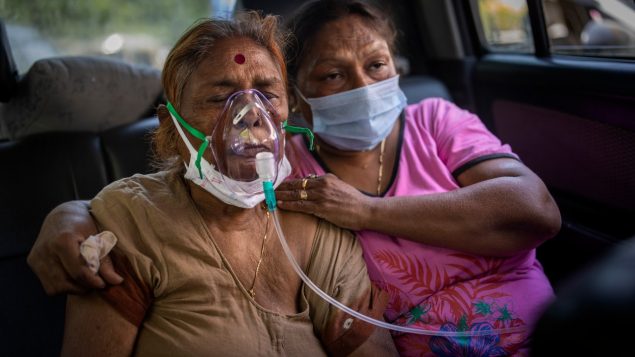 A COVID-19 patient receives oxygen inside a car provided by a Gurdwara, a Sikh house of worship, in New Delhi, India, Saturday, April 24, 2021. India’s medical oxygen shortage has become so dire that this gurdwara began offering free breathing sessions with shared tanks to COVID-19 patients waiting for a hospital bed. They arrive in their cars, on foot or in three-wheeled taxis, desperate for a mask and tube attached to the precious oxygen tanks outside the gurdwara in a neighborhood outside New Delhi. (Altaf Qadri/AP Photo)

Canadian officials are in talks with their Indian counterparts about how Canada can best help India as it battles a grim surge of coronavirus infections that have overwhelmed the country’s healthcare system, Prime Minister Justin Trudeau said Tuesday.

“We’ve all seen the heartbreaking news from hospitals in India that are unable to keep up with the number of patients,” Trudeau told reporters at a press conference in Ottawa.

“We are also ready to provide $10 million – through the Canadian Red Cross – to the Indian Red Cross,” Trudeau said. “This will support everything from ambulance services to buying more PPE (personal protective equipment locally).”

Tuesday’s 323,144 new infections raised India’s total past 17.6 million, behind only the United States. It ended a five-day streak of recording the largest single-day increases in any country throughout the pandemic, but the decline likely reflects lower weekend testing rather than reduced spread of the virus.

The Indian health ministry also reported another 2,771 deaths in the past 24 hours, with roughly 115 Indians succumbing to the disease every hour. The latest fatalities pushed India’s deaths to 197,894, behind the U.S., Brazil and Mexico. Experts say even these figures are probably an undercount.

‘We need to be there for our friends’ 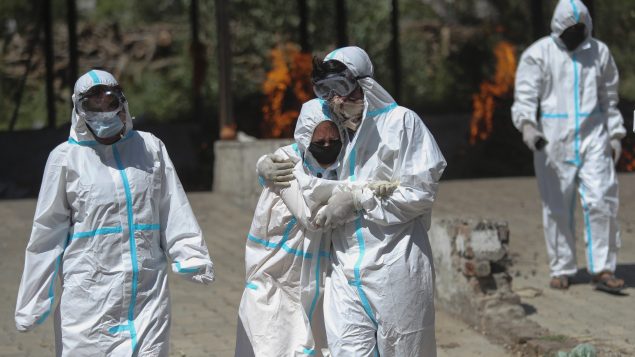 A relative of a person who died of COVID-19 is consoled by another during cremation in Jammu, India, Sunday, April 25, 2021. India’s crematoriums and burial grounds are being overwhelmed by the devastating new surge of infections tearing through the populous country with terrifying speed, depleting the supply of life-saving oxygen to critical levels and leaving patients to die while waiting in line to see doctors. (Channi Anand/AP Photo)

Canada’s Procurement Minister, Anita Anand, said her cabinet colleagues Garneau and Development Minister Karina Gould are coordinating their efforts to “to ensure that we are mounting as much assistance as possible.”

Anand said she’s been in contact with Canada’s envoy in India and India’s High Commissioner in Canada to ascertain the precise supplies that are needed in India and how best Canada can support the needs that India has.

Trudeau said Canadians are also concerned about the situation in Pakistan and that Garneau is expected to speak with his Pakistani counterpart later on Tuesday.