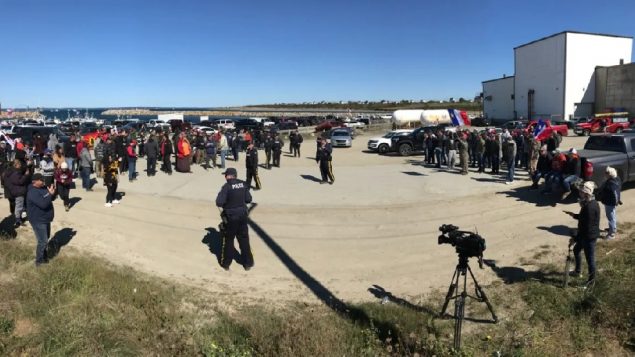 RCMP officers position themselves between Mi'kmaw and commercial fishers on the Saulnierville wharf at Nova Scotia's St Mary's Bay on Sept. 20, 2020. (Jeorge Sadi/CBC)

A dispute over lobster fishing in Canada’s east coast maritime provinces has been simmering for years. Pitting Indigenous groups against regulated commercial fishers, it boiled over into violence last year in Nova Scotia.

Indigenous fishers say they have treaty and Supreme Court rights to fish where and when they want, and beyond personal, cultural, and ceremonial needs, to earn a ‘moderate living’ from the resource. The Supreme Court later ruled that right is not absolute and may be subject to rules on conservation or other pressing public considerations.

Commercial fishers say the season is regulated and limited in order to conserve the resource and fishing out of season by ‘self regulated’ Indigenous groups will harm the fishery.

Last year the dispute erupted into shouting matches between the two groups, some shoving, some destroyed Indigenous traps. and a vehicle and a fish plant where some Indigenous catch was being stored were burned. In spite of government consultations the dispute is far from resolved.  Chief Mike Sack of the Sipetne’katik First Nation said his band will  re-start their own self regulated fishery this June and sent a letter to the United Nations saying Canada was not upholding its commitment to the U.N treaty on Indigenous rights. 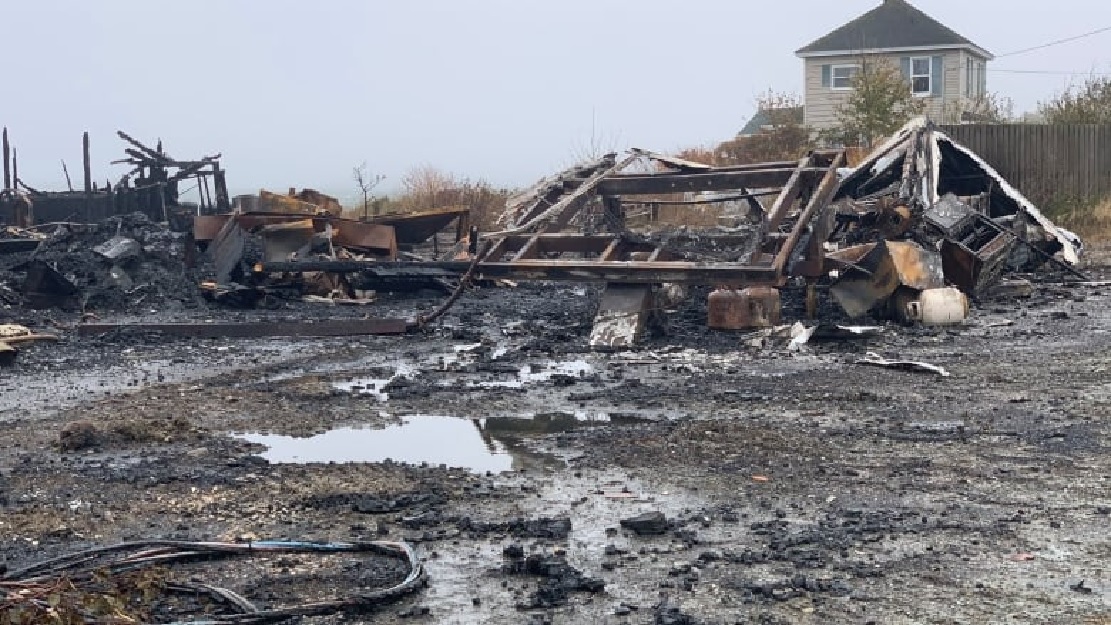 The scene in October 2020 on the morning after a suspicious fire destroyed a lobster pound in Middle West Pubnico, N.S., overnight, severely injuring one man. (Taryn Grant/CBC)

The head of the U.N. Committee on the Elimination of Racial Discrimination has now sent a letter to Canadian officials asking for clarification of Chief Sack’s allegations of racism and of lack of protection for Indigenous Mi’kmaw fishers and their rights.

Commercial fishers have long stated their position is not racist but rather about adhering to federal regulations they have to observe for conservation reasons to ensure sustainability of lobster stocks.

The U.N. letter says in part, “According to the allegations received, Provincial and Federal governments have failed to fully respect the treaty based right of the Mi’kmaw peoples to their traditional fishing activities. It is alleged that, in that context, the Mi’kmaw fishers have been subject to criminalization for exercising such fishing rights and that Canadian authorities have confiscated their catches and equipment. It is also claimed that the failure by the State Party authorities to respect and protect the Mi’kmaw people’s rights to their fishery has reinforced the escalating reported racism and violence”.

The letter continues with, “It is further alleged that, despite being aware of the high risk of violence, the competent Canadian authorities – in particular the Royal Canadian Mounted Police (RCMP) and the Department of Fisheries and Oceans (DFO) – failed to take appropriate measures to prevent these acts of violence and to protect the Mi’kmaw fishers and their properties from being vandalized”.

Saltwire news reports that in response to the 1999 Supreme Court ruling and subsequent clarification of limits, the federal government then spent some $580 million buying up several fishing licences from commercial fishers in the maritime provinces and giving them to various Indigenous groups, although the Supreme Court ruling of what constitutes a “moderate livelihood’ was never clarified.

The Sipetne’katik were given 15 lobster licences along with licences for several other types of fishing. The federal government also bought and gave the First Nation ten fishing boats at a cost of about $2.4 million. The Saltwire story says the band later sold the boats back to the marine broker for about half the original cost. Saltwire also reports several of the Sipet’nekatik lobster licences were then leased to Chief Sack who then re-leased them to commercial fishers at a higher rate.

For its part DFO responded to media requests and RCI with a statement saying, “We have been clear from the beginning that all acts of violence, intimidation, or destruction of property will not be tolerated. In response to the events in South West Nova Scotia last fall, both the Coast Guard and RCMP officers were brought in to support DFO officers. As a result of their enforcement efforts, thirty-four charges have been laid against individuals for a variety of actions, including an assault against Mi’kmaq fishers and destruction of their property. There is an ongoing police investigation into these matters.

DFO will continue to work with RCMP, the Coast Guard, and other bodies to ensure that all harvesters and community members are safe and supported, as we work collaboratively to implement First Nations’ Treaty rights in partnership and through dialogue. We will continue building a more inclusive country, free from racism and discrimination.

We are reviewing the letter from the United Nations’ Committee on the Elimination of Racial Discrimination carefully, and will respond to the inquiry directly.”

For its part the U.N. letter requests the Canadian government respond by July 14 to the Sipet’nekatik allegations in its letter along with clarification of any actions taken to improve or redress the situation.