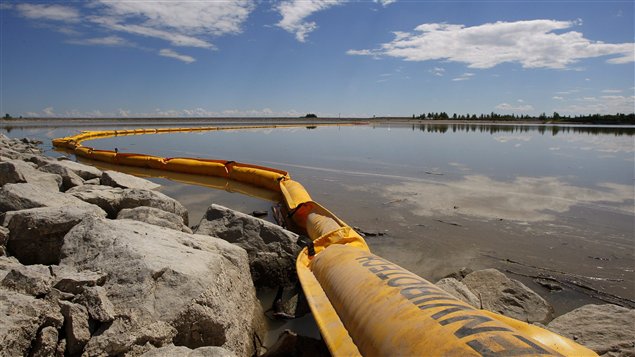 A boom stretches out to contain a pipeline leak on the Gleniffer reservoir near Innisfail, Alta. The non-fuctioning pipeline leaked between 1,000-3,000 barrels of sour crude near Sundre, Alberta, on June 7, 2012 and flowed downstream in the Red Deer river to the reservoir.
Photo Credit: AP Photo/The Canadian Press / Jeff McIntosh

Pipeline safety will be focus on new group

The federal government, the provincial governments of Alberta and British Columbia as well as the Canadian Association of Petroleum Producers and the pipeline association are forming the Canadian Pipeline Technology Collaborative.

Pipeline industry spokeswoman Brenda Kenny says the organization is expected to up and running this fall. She says universities, environmental and aboriginal groups will eventually be invited to the table. She gave no date for their participation.

The Saskatchewan government has also been approached.

Ms. Kenny says the organization will fund research with public and private money to ensure results and the best practices are widely shared.

The announcement comes as Alberta prepares to release a long-awaited report into pipeline safety, and regulators consider a series of controversial pipeline projects.

A spokesman for Greenpeace, Keith Stewart, noted that no environmental or aboriginal groups have yet been invited to participate. He said Greenpeace is in favour of more research, but added that governments should be requiring better use of improved technologies that already exist.