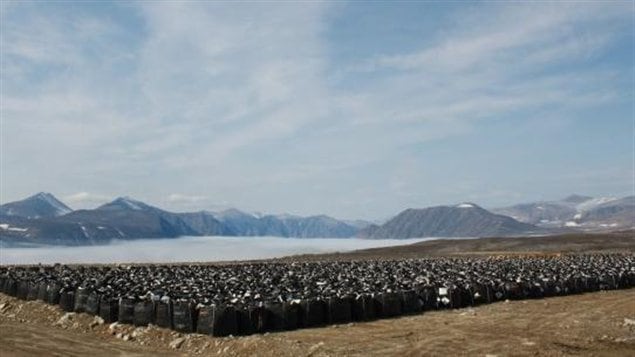 Bags of contaminated soil are lined up, waiting to be shipped south for disposal.
Photo Credit: Paul Tukker/CBC

Eye on the Arctic – Cleaning up Canada’s radar sites

The Distant Early Warning Line system, known as the DEW Line, was a radar site that operated across northern Canada from 1958 to 1992.

Since then, a major project has been underway to clean up the over 40 radar sites, getting rid of everything from garbage to contaminated soil.

Harry Flaherty is the  president of Qikitaaluk Logistics, the Inuit-owned company involved in the cleanup.

He said his first view of the Cape Dyer site was a disturbing one.

“It’s very unpleasant to see one of these sites,” Flaherty said citing the garbage, oil and abandoned drums left behind.

The cleanup is no easy task.  The extreme weather and the remoteness of the sites makes these cleanups challenging, but Flaherty says it’s worth it in the end.

“(At the beginning) there’s no sign of wildlife,” he said. “No plear bears, no foxes no ptarmigan.”

“But at the end of those nine years you can see the wild life slowly coming back trying to inhabit the island, and this is the most rewarding of all the project.”

To find out more, Eye on the Arctic’s Eilís Quinn reached Harry Flaherty in Nunavut’s capital of Iqaluit.