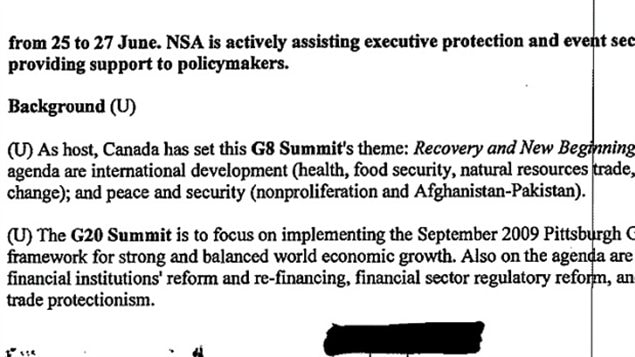 Canada's public broadcaster CBC released documents related to a story on how Canada and the United States worked together in widespread surveillance during the 2010 G8 and G20 summits in Canada.
Photo Credit: CBC

Canada’s national public broadcaster CBC released a document Monday (December 2) which was the basis of last week’s report that Canada allowed widespread surveillance by the U.S. National Security Agency (NSA) during the 2010 G8 and G20 summits in Canada.

The covert U.S. operation was no secret to Canadian authorities and was coordinated with Canada’s intelligence gathering agency, the Communications Security Establishment Canada (CSEC).

In releasing the document, CBC’s Director of News Content, David Walmsley, wrote “CBC News believes in transparency and showing supporting documents to its journalism. It held back on publishing the U.S. material until discussions with the U.S. government had been completed over the weekend.”

The document can be accessed here.