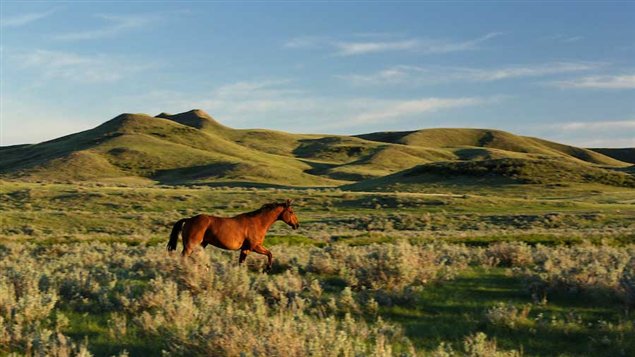 There’s a good deal of concern about the fate of Canada’s natural prairie grasslands.

The grasslands are present in the three western provinces of Alberta, Saskatchewan and Manitoba.

However, as an example, only 18 percent of the original grassland is left in the province of Saskatchewan where Trevor Herriot is a committee member of the group, Public Pastures- Public Interest, a group formed to try to portect some of the grasslands.  He’s also an award winning non-fiction author on western Canadian nature and culture.

A programme that’s been managed and funded by the federal government for over 70 years- the Community Pastures programme-is coming to end.

Set up in the 1930’s to rehabilitate land damaged by years of severe drought, the lands were managed by a central authority which monitored the grassland and how and where small-hold ranchers could graze their animals.

For a small fee, rancher’s herds could graze under the watchful eye of managers which provided benefit to the ranchers while simultaneously assuring the sustainability and environmental protection of grasslands.

Trevor Herriot, award-winning author is one of many working to preserve the future of the natural prairie grassland.

Federal funding to pay for for management and conservation programming protecting species at risk and biodiversity is being cut, and the lands turned over to the provinces. The concerns are that the provinces have no funds to maintain that oversight and management.

Particular efforts are being made to preserve three contiguous fields- Govenlock, Nashlyn, and Battle Creek, with a combined area of over 800 km of grassland located in the south-west corner of the province (google- RCI)

Trevor Herriot’s group is concerned about trying to protect the former Federal community pastures managed under the federal agency Agriculture and Agri-foods Canada (AAFC), which had through most of their 78 years had been known as PFRA (Prairie Farm Rehabilitation Administration) pastures.

The fear is that the land will  be leased or sold as the provinces have no money to continue the management programme.

Despite assurances of no-break conservation easements from the Province, Herriot’s group is concerned that as the pastures are sold and change hands some will eventually be cultivated and converted to cropland. As well, they worry that the private groups of cattlemen leasing the pastures will not have the financial support to maintain the same kind of long term ecologically sound management practices that have made the PFRA pastures into some of the healthiest public rangeland on the continent.  The pastures may receive heavier grazing pressure and be degraded over time, affecting many species at risk.

There is also a concern that without federal monies to control invasive species, that too will become an issue.

Archeologists have mentioned that historical sites and artefacts that document how First Nations groups lived may be compromised by sale or lease of these lands.

Trevor Herriot says the grassland ecosystem needs its vast size to be viable, and selling or leasing of portions of the overall pasture will threaten the remainder. He says the province has already lost 82% of its native prairie.

The grasslands are also home to the prairie sage grouse. Very easily disturved by human presence, there are only about a mere 150 thought left in Alberta and Saskatchewan (photo- CBC)

Herriot also points out that many small town families depend on the PFRA management jobs and pasturing programme.

Local economies, schools, and communities benefit from staff being employed in the pastures system. The pasture system supported many small to medium-sized cattle operations. Selling or leasing the pastures to private groups will cause further consolidation in the beef industry and that will hurt local businesses–for example agricultural suppliers and veterinarians who depend on a healthy and diversified local grazing community. This would also have a ripple effect on schools and other businesses as some families move on as well.