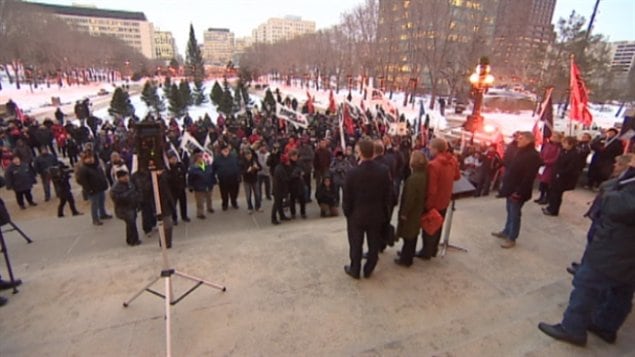 Hundreds of unionists came out to protest legislation presented by the western Canadian province of Alberta that set fines for illegal strikes by the public sector, and set a time limit for negotiations, and then an imposed settlement.
Photo Credit: CBC

An attempt by the Canadian province of Alberta to overturn the normal process of negotiation was blocked February 14, when a judge granted the union representing the government employees an injunction.

In his ruling blocking the implementation of Bill 46 – the Public Service Salary Restraint Act – Judge D.R.G. Thomas concluded the bill “guts the bargaining process by removing any effective leverage on the part of the workers who, as a result of other provincial laws, cannot withdraw their labour. The effect of this legislation is to emasculate the AUPE” [Alberta Union of Provincial Employees].

AUPE President Guy Smith welcomed the decision: “The effect of the injunction is to restore our members’ rights while we argue in the courts to have the legislation rescinded. We are prepared to take our challenge to the Supreme Court of Canada if necessary, so it’s important our members’ rights are protected while that process unfolds.”

On Tuesday, the Premier of the province Alison Redford said her government won’t back down from the controversial labour law and will appeal the judge’s ruling.

But the next day, in an editorial the Edmonton Journal newspaper concluded: “the Redford government should focus its energies – and its budget – on the hard slogging it will take to mend fences with its public service workers and stop wasting tax dollars on court fights it never should have picked in the first place.”

RCI’s Wojtek Gwiazda spoke to Jason Foster an industrial relations expert who teaches at Alberta’s Athabasca University about the ruling and its importance.