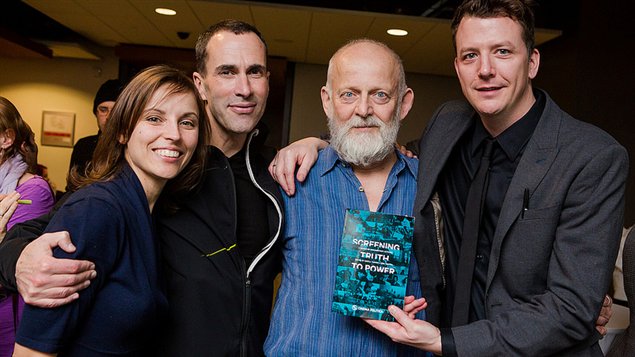 ‘Screening Truth to Power – A Reader on Documentary Activism’

For 10 years Cinema Politica, a Montreal-based media arts, non-profit network, has been getting people together to watch documentaries and hold discussions in what they call documentary activism, and have been very successful.

It started off in a classroom at Concordia University in Montreal. It now has 75 locals across Canada, and 25 outside of the country.

To celebrate its success, and to share essays, lists of documentaries to see, and interviews with filmmakers, Cinema Politica has published a book called “Screening Truth to Power – A Reader on Documentary Activism”, edited by Ezra Winton and Svetla Turnin.

The book launch was at Concordia on April 9th.

RCI’s Wojtek Gwiazda spoke to Ezra Winton, Cinema Politica‘s co-founder and director of programming, about the book and why they decided to publish it for Cinema Politica’s 10th anniversary.