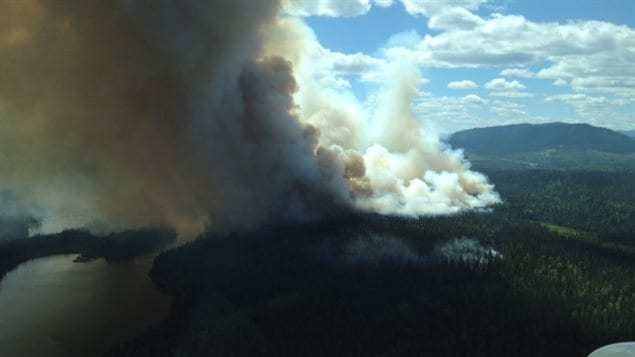 British Columbia is in in the grip of a heat wave that is breaking records these days. One of the many concerns this weather brings is the spread of wildfires.

Temperatures were averaging around 30 C across the province over the weekend. Three communities recorded highs above 40 C yesterday.  According to David Wray, a meteorologist with Environment Canada,  temperatures in southern British Columbia are 10 to 11 C above normal for this time of year.

In an interview with CBC, Navi Saini, of the B.C. Wildfire Management Branch said Sunday, there were 55 wildfires burning across the province.  At least three of them are large fires that are expected to take days to put out.

160 firefighters and 12 helicopters are battling a 3,800-hectare blaze close to Tumbler Ridge, in northern B.C. near the Alberta border. That fire began a week ago.

Navi Saini said there have been no casualties so far, but an evacuation order was issued to three nearby oil and gas camps.  200 people are affected.