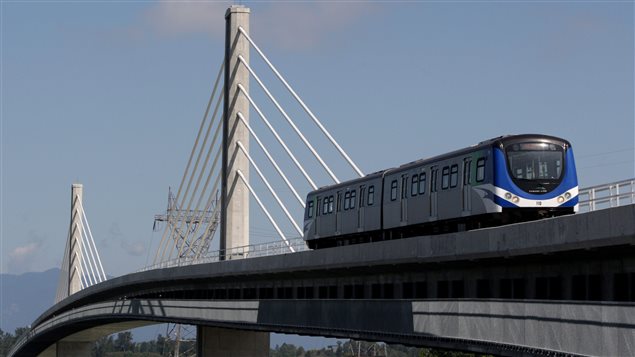 A Canada Line rapid transit train is seen crossing the Fraser River from Vancouver to Richmond. An investigation into problems with the system that stranded thousands of passengers is just getting under way.
Photo Credit: Canadian Press / DARRYL DYCK

An independent review of Metro Vancouver’s rapid-transit system was set to begin Tuesday.

It follows two shutdowns this month that stranded thousands of commuters, and in some some cases forced passengers to pry open doors and exit trains along elevated tracks.

The investigation is being led by Gary McNeil. He is the former head of Go Transit, the transportation authority for Greater Toronto and Hamilton.

He is also expected to investigate procedural and equipment changes that will enable service to resume more quickly.

The head of the Vancouver transit system, TransLink CEO Ian Jarvis, says the network has already conducted its own internal reviews and will begin to implement changes.

Among those changes, Mr. Jarvis says, are the mobilization of more employees faster, better public announcements and a plan to provide improved support for clients when problems arise.

TransLink blamed this month’s chaos on computer problems and human error. The shutdowns of the Expo and Millennium lines occurred July 17 and July 21.

Mr. McNeil’s report is expected at the end of October.