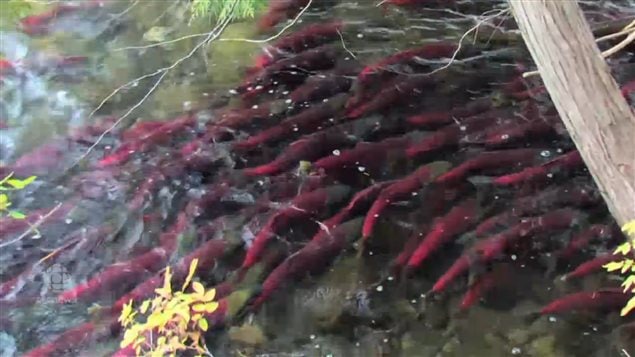 Experts warn the mine spill could harm the huge sockeye salmon run in the western province of British Columbia.
Photo Credit: CBC

Huge mine spill may threaten salmon and wildlife

The world’s biggest salmon run will soon move into waters polluted by waste from a gold mine in the western province of British Columbia. A state of emergency persists in the region around the Mount Polley mine where Monday’s breach in the wall of a holding pond sent millions of litres of water and tailings into pristine lakes and waterways.

Investigations are underway to try to find out what exactly is in the water. There is a ban on all use of water and a ban on fishing in the Quesnel Lake and Cariboo Creek. These waterways feed into the mighty Fraser River. Sockeye salmon are beginning to swim upstream to spawn and are expected arrive at the lakes in the coming weeks.

It’s not known how pollutants may affect them and that has elicited anxiety among aboriginal people in the region who depend on the fish for food and income. There is also worry about the effect on animals which eat the salmon.