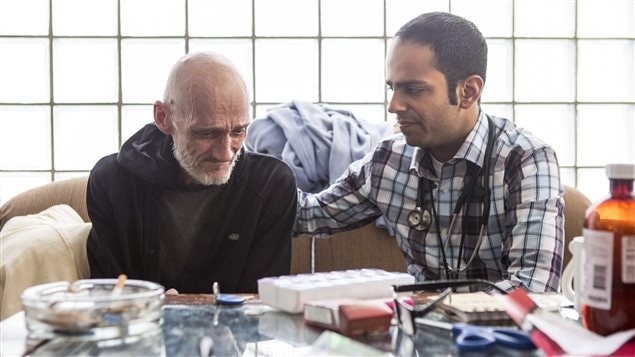 The homeless–like death–are a fact of life in Canada. Always with us, it seems.

Walk down a big city street in Canada and you will pass someone begging for change, cuddling a dog or simply passed out from exhaustion.

These are the people who slipped through the cracks. Sometimes it was their fault. Sometimes not.

Whatever the cause, one thing seems quite certain. Very, very few want to be there.

They lead very rough lives. (Think, for example, about sleeping on a grate when it’s 20 below zero, or having what few possessions you might own stolen while you sleep. Happens all the time.)

They can face very tough–and early–deaths.

The statistics are shocking, if not especially surprising: the rate of premature death of homeless people runs from four to seven times higher than that of the general population.

Mercifully, a lot of Canadians are trying to do something to ease the pain.

One of them is Dr. Naheed Dosani, a palliative care specialist at St. Michael’s Hospital in Toronto. Dr. Dosani is part of a network of physicians called PEACH (Palliative Education and Care for the Homeless), a new program that takes end-of-life care to the homeless and the vulnerably housed.

He spoke to RCI from Toronto.