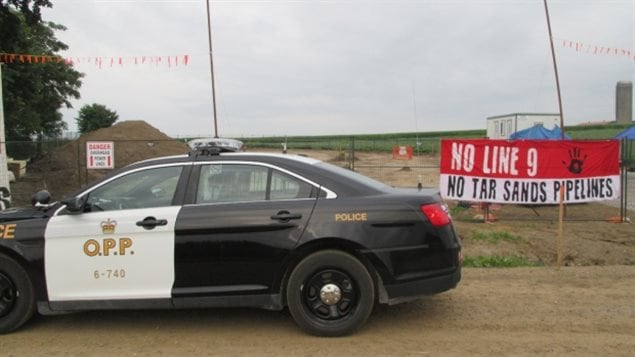 Protesters set up a blockade at an Enbridge pipeline site in southwestern Ontario on Tuesday, disrupting work on what is called Line 9.
Photo Credit: CBC

A blockade at construction site on a pipeline that carries crude oil between Montreal and Sarnia, Ontario shows no signs of being over soon.

About 30 activists set up the blockade along the site of the Enbridge Line 9 pipeline near the southwestern Ontario town of Innerkip on Tuesday.

They say they will stay until their concerns are met.

They fear the installation of a valve near River Thames, which they fear is not adequately protected from the risk of a spill.

Enbridge is reversing the flow of crude to increase the pipe’s capacity but has been forced to halt the work because of the blockade.