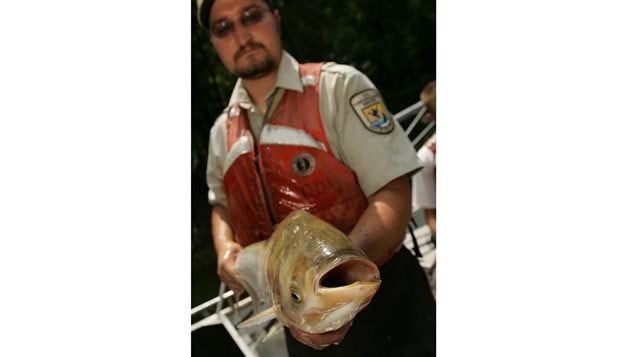 Asian carp have already invaded several US rivers completely overwhelming native species. There are great fears they could enter the Great Lakes, and some evidence shows that some may already have invaded.
Photo Credit: Steve Hillebrand, US-FWS

A new report says the Great Lakes have been invaded by more non-native species than any other freshwater system in the world.

The study looks at three potential scenarios for the lakes related to invasive species: a pessimistic scenario where current protection regulations are not working, a status quo, and an optimistic scenario.

The report notes that many of the invasive species already causing harm to the Great Lakes ecosystem, and imposing substantial costs on communities were transferred to North America in the ballast water of cargo ships. The zebra mussel is an example.

Regulations requiring ships to change ballast in the ocean before entering the St Lawrence and proceeding up to the Great Lakes has proven to be relatively effective in stopping new instances.

However, the report notes that there are very real continuing threats, not the least of which is global warming. As the lakes warm, this will allow current invaders to increase in number, while enabling species, which previously could not survive cold for long periods, to move into now warming waters with shorter winters.

Another very real concern is that many types of aquatic life are being imported and remain largely unregulated.  This includes live animals and plants for food markets or to be used as baitfish and aquarium pets. These are sometimes released live into the lakes and rivers, such as the case with Asian Carp, which are voracious and can seriously harm an ecosystem in short order as they have already done in some US waterways.

The plant, Eurasian water-milfoil may have come in from ships ballast or from the aquarium trade. First discovered in Lake Erie in 1961, has spread rapidly throughout the Great Lakes and all water tributaries, reducing biodiversity, reducing oxygen levels as it decomposes, while dense stands can actually help create stagnant water, ideal for mosquitoes.

In the most optimistic scenario the researchers say cooperation between US and Canadian authorities to develop unified policies, such as governing import of live species, would be the best way to prevent or substantially reduce the threat of harm from invasive species.